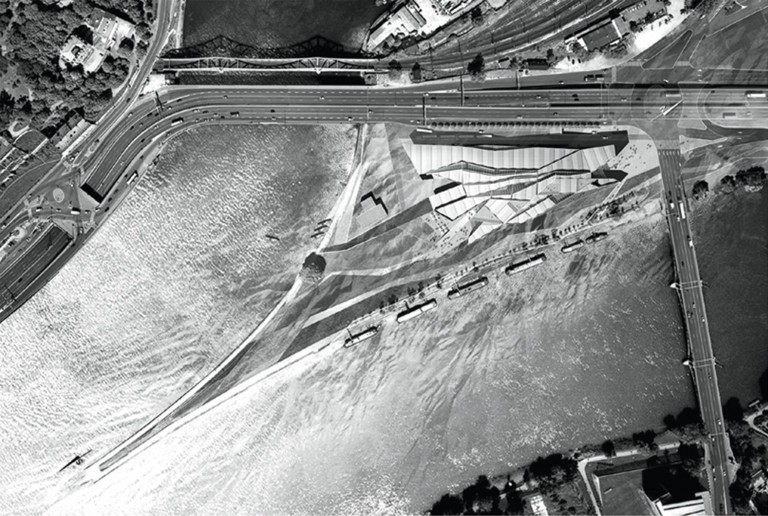 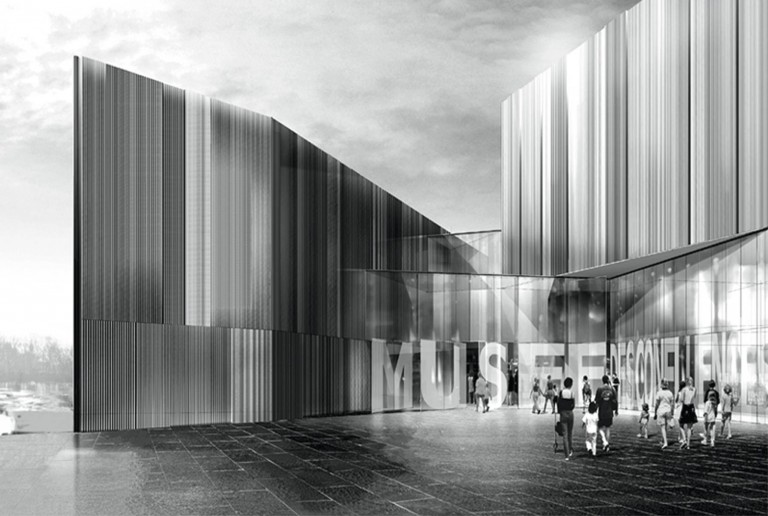 The location of the Confluence Museum of the Rhone and the Saone is landmark full of history.  It occupies an important place in the imagination and identity of Lyon.  However, this place has not received adequate treatment.  In addition to its isolation, the physical reality is opposite what of what it should be due to its symbolic role, and the place has become more a non-place, unused and lacking in quality.

The confluence of the Rhone and the Saona is marked by perpetual mutation.  The beds of the river change over the centuries, first due to natural erosion and sedimentation, and other interventions produced by the man who seeks to dominate the rivers.

The installation of the Museum at the confluence is nothing more than another stage of these changes.

Until today, the interventions have done nothing more than contribute to the building’s isolation, but the ambitious program of the Confluence Museum hopes to use the location as a complement to the full height of its significance.

The project of the Museum offers the opportunity to build up the site to reflect its true image.  Our proposal desires to monumentalize the place, instead of erase it behind a monumental building.  The Museum is much more a symbol of the place than just an integral part of the site.

The volume of the museum is formed by a sequence of folded walls that intersect, separate, and create distance.  These folds meet the conditions of the site, its symbolic role, its urban function and physical constraints, all while organizing the program and adopting structural solutions.

It is a system capable of integrating all the complexity of the project.

In this area, marked by the natural elements and evolution, the fractal structure of the building reflects the issues of erosion, the folds of the land and sedimentation.

Similarly to the development of the rugged coast, river gorges or mountain ranges, the folded walls of the museum are a complex geometry with many possible variations, always obeying the laws of formation.

Finally, it is by successive layers that you have created the knowledge of man in the universe.

The shape of the building symbolizes both the site and the program.

The two façades respond to the two courses of water.  Along the highway, the continuous façade is the image of the Saone, a lazy river running down the valley.  At the same time, it provides protection from the highway.  Looking towards the Rhone, the building opens to the landscape.

More fragmented and with angles and variations in height, the façade reflects the image of the swift and violent river as well as the steep mountain geography.

The public space between the vertical walls slides and cuts through the building.  The park penetrates the body of the building, so the museum is internally connected with its location.

The façades, clad in cast aluminum mesh, consist of vertical strips of different thicknesses and the spaces in the mesh vary.  This system allows illumination and the creation of openings, conserving the homogeneity of the walls that are perceived as monolithic elements.

The texture reinforces the geological impression induced by the volumetry.

The folds create successive parallel bands which lie in different elements of the program.

In coherence with the volumetry, these bands are continuous on the side of the Saona, y and fragmented ore and more on the façade on the front bank of the Rhone.  One of these bands, the inside, serves as the point in which the different elements are interconnected.  Access to the great plaza prolongs the interior of the museum and leads to the park, crossing a gap of three meters by a continuous ramp.

This is a true public space that allows the public to grasp the idea of the museum without actually entering it.

The center of the museum, a space relative to the whole building’s height, connects and relates al the exhibition spaces in one volume.  The space is illuminated by crevices throughout the roof that allow light to pass through the whole of the space.

The openings on the extremities of the building allow for views towards the plaza and towards the confluence.  By these openings, one can directly access the intermediate level where the auditoriums and conference rooms are located, thus this level can function autonomously.

Inside, the simple organization of the geometric system offers a wealth of space and allows for great readability of the space.

The organization of the spaces allows a diversified diffusion of the museum that converts it into a real space for encounters and exchanges.
With the great museums and city parks, the Confluence Museum will be a part of a cultural tour of the urban scale, linked by two large rivers.  For its contemporary radical concept, the building contributes to the ambitious cultural project of the city and projects and international image of the urban region of Lyon.