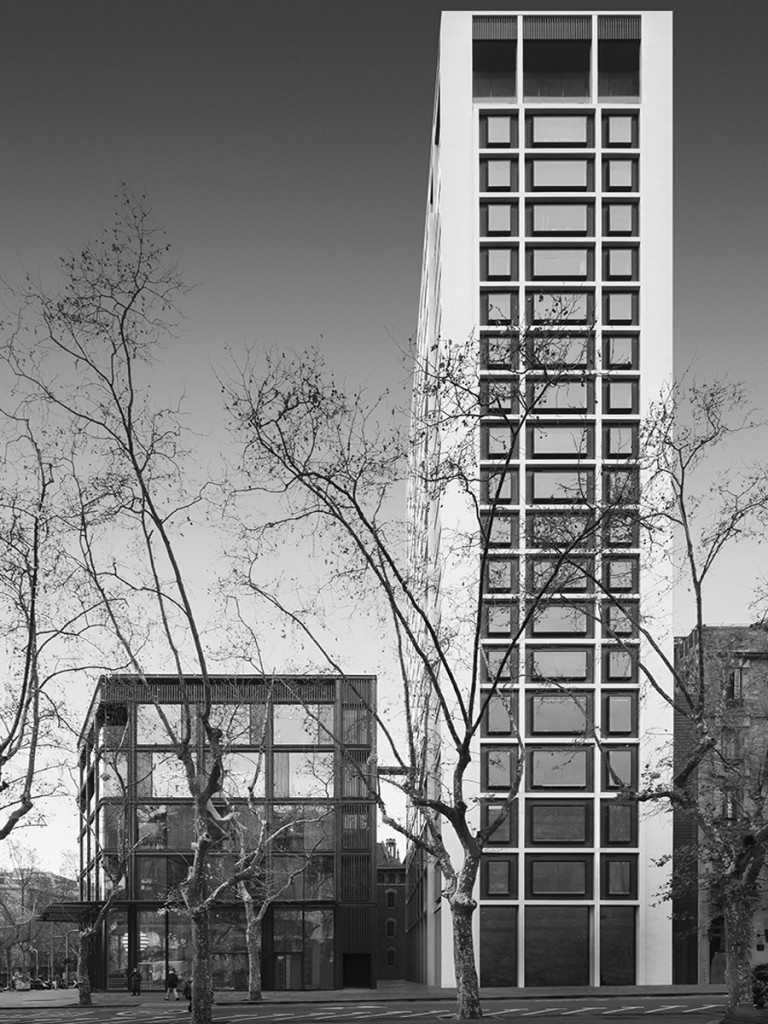 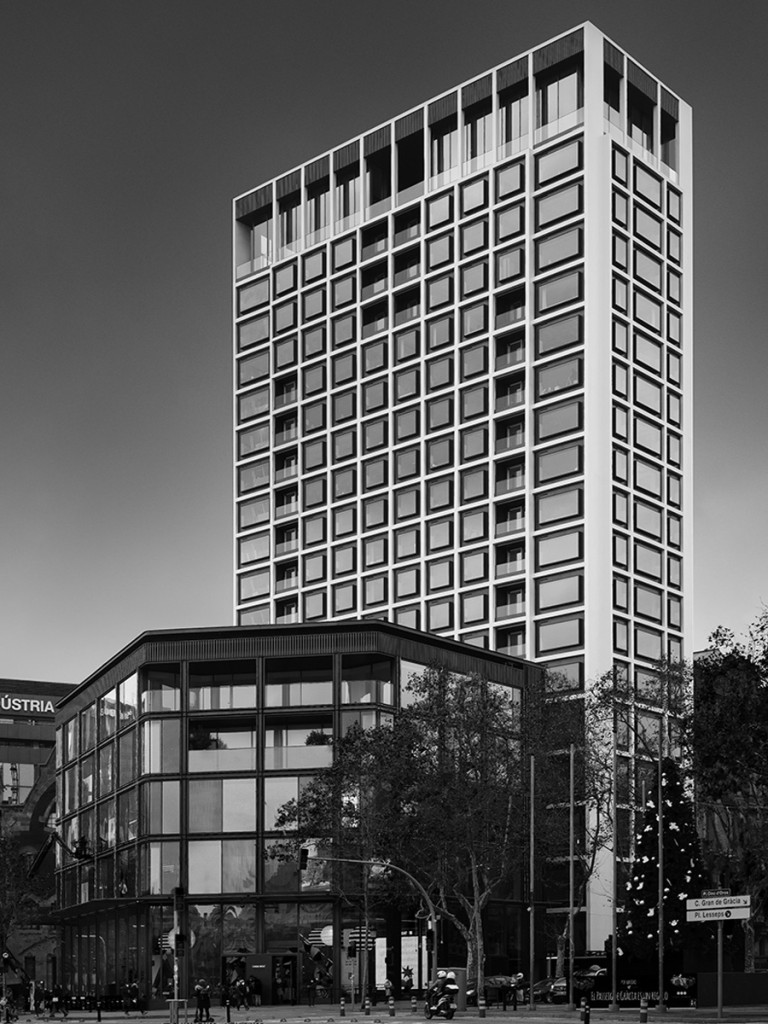 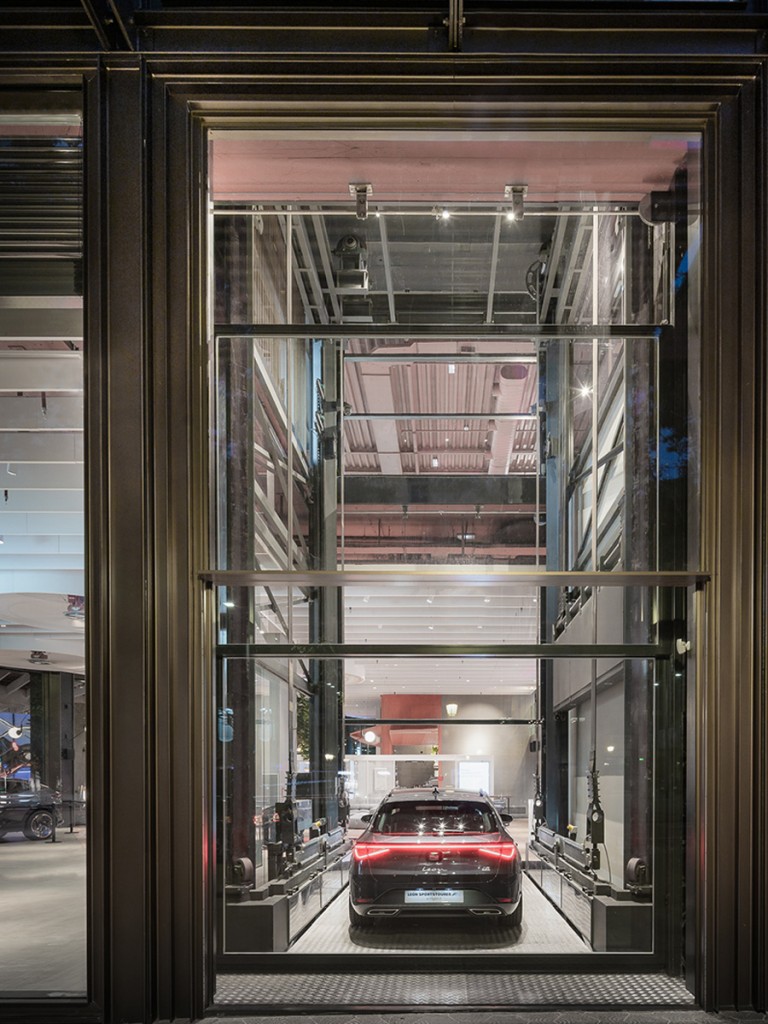 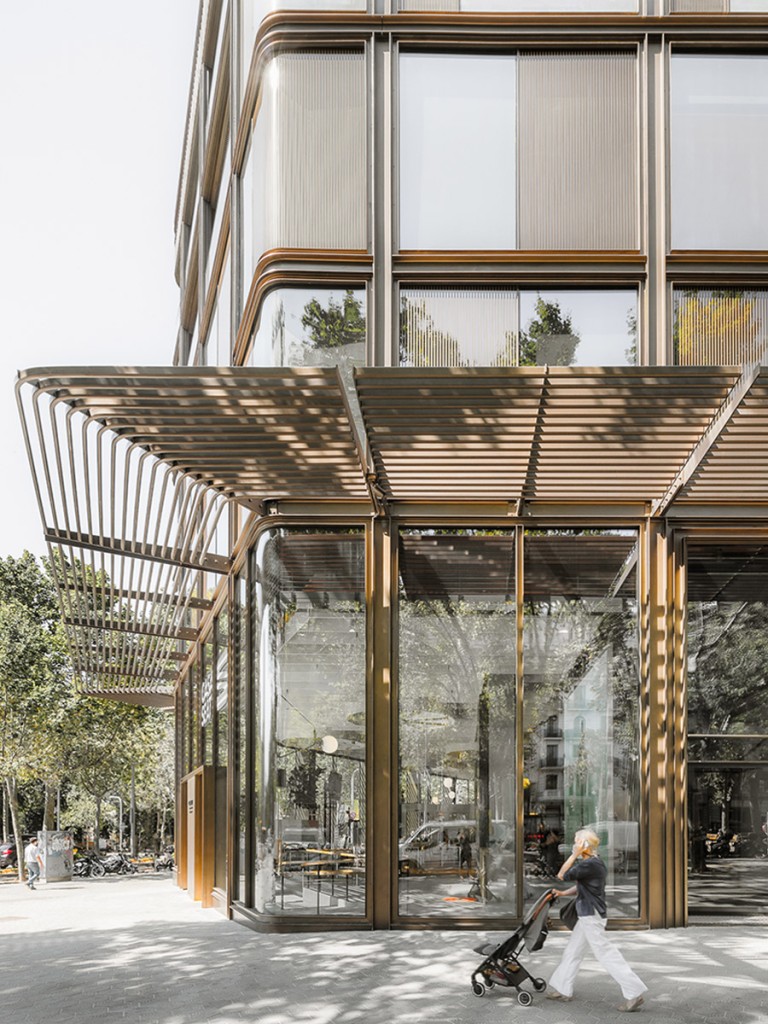 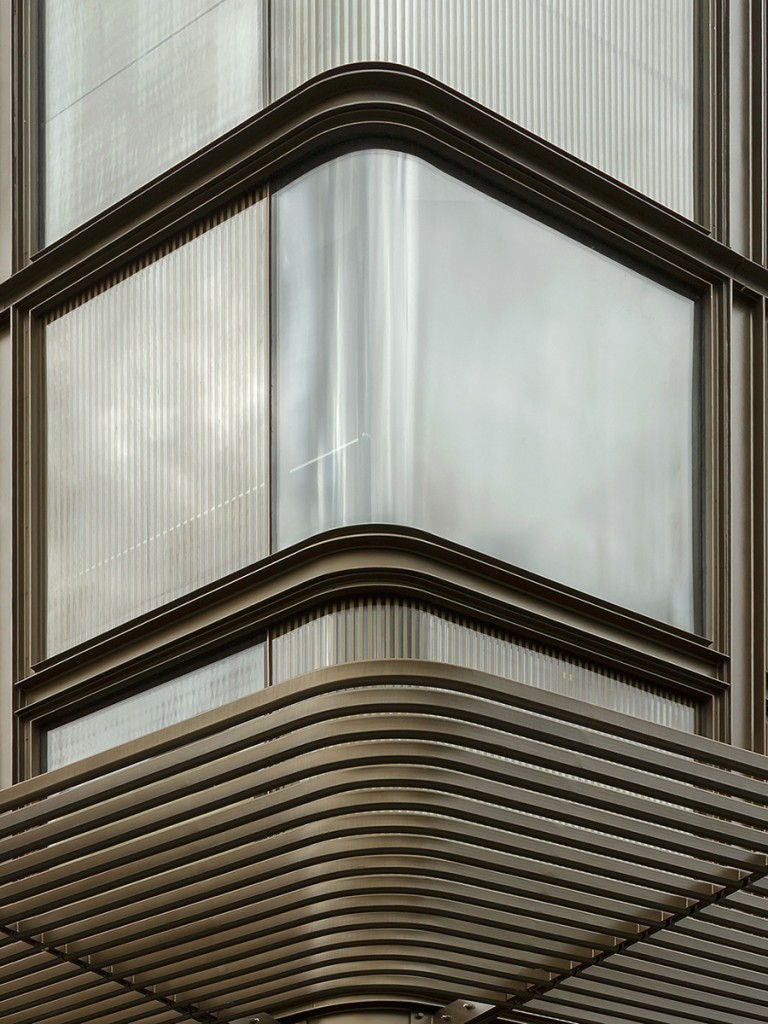 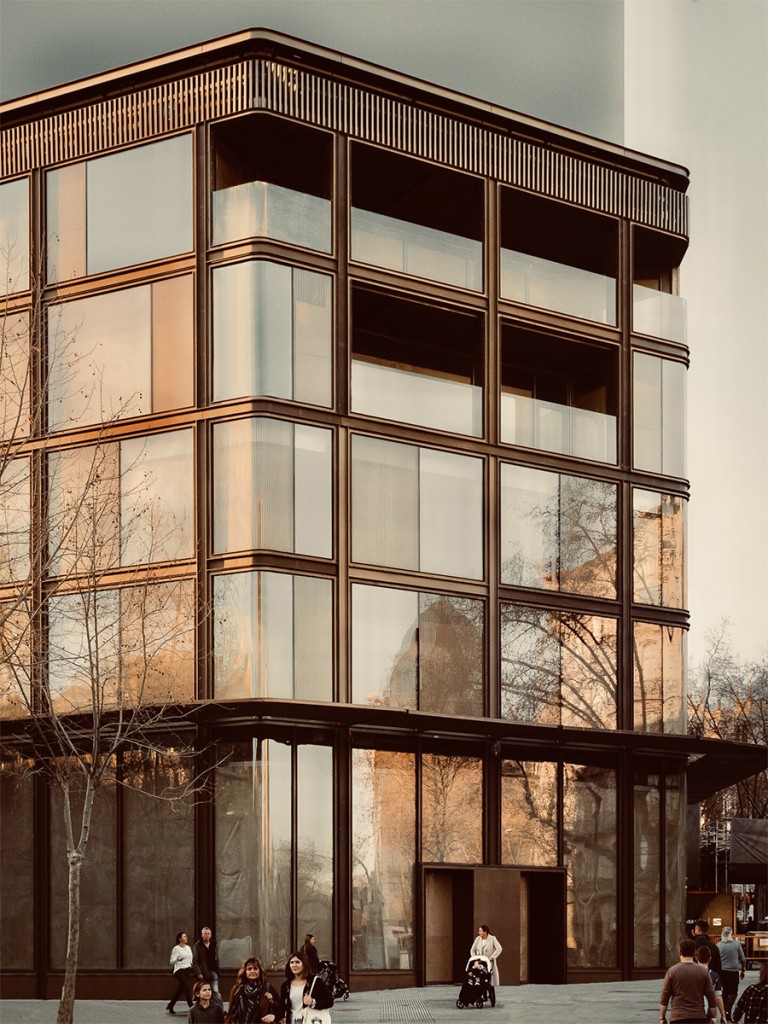 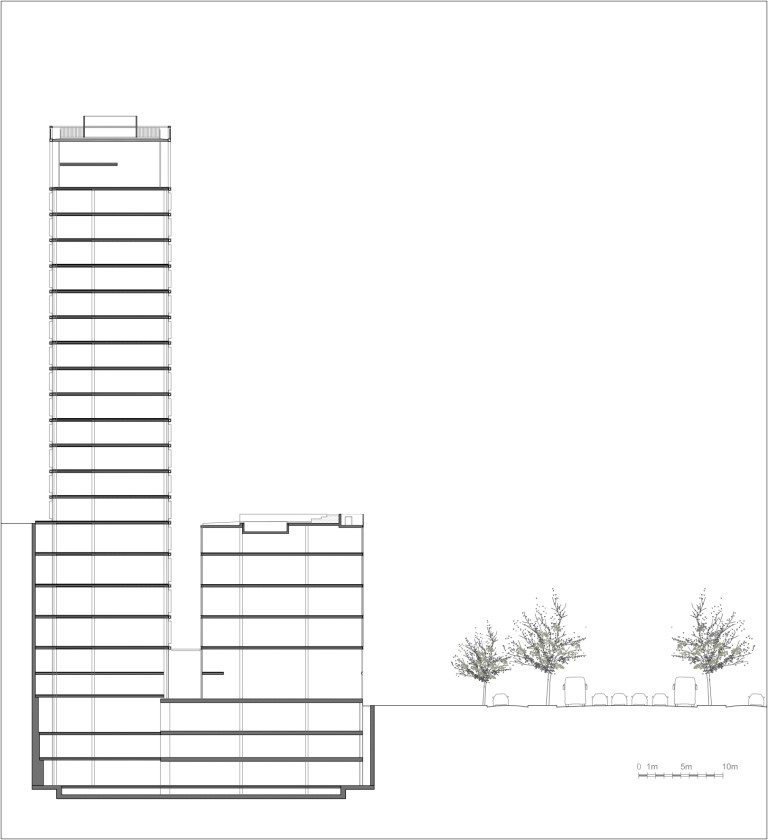 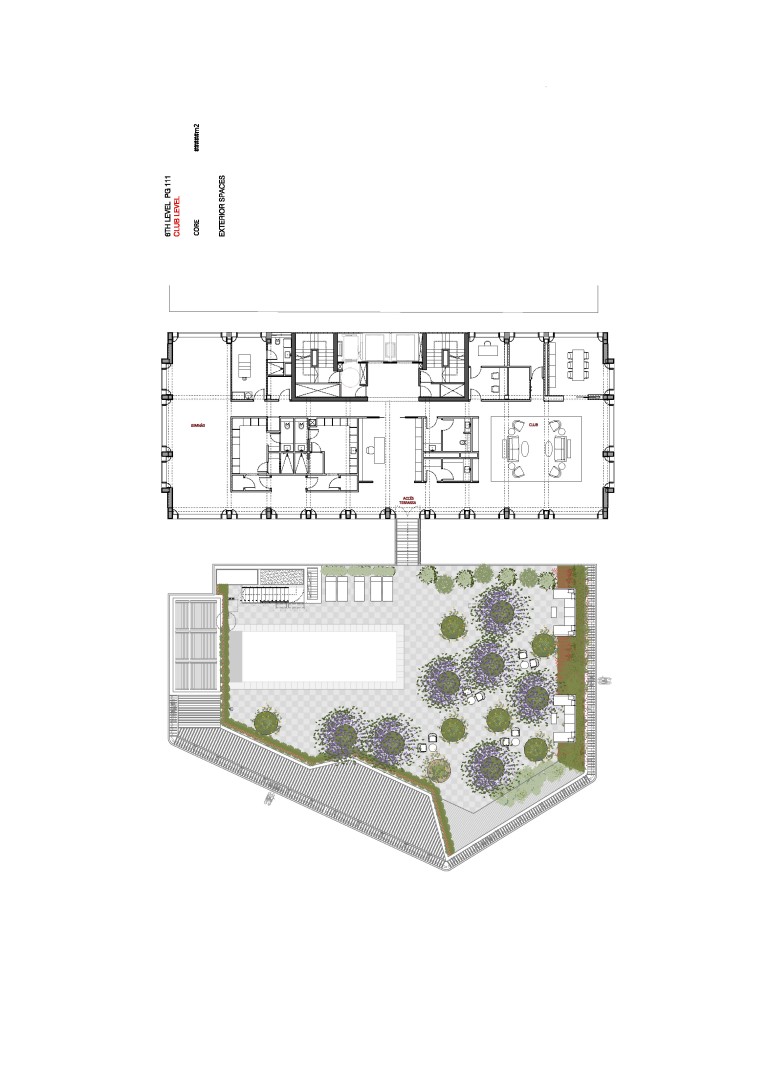 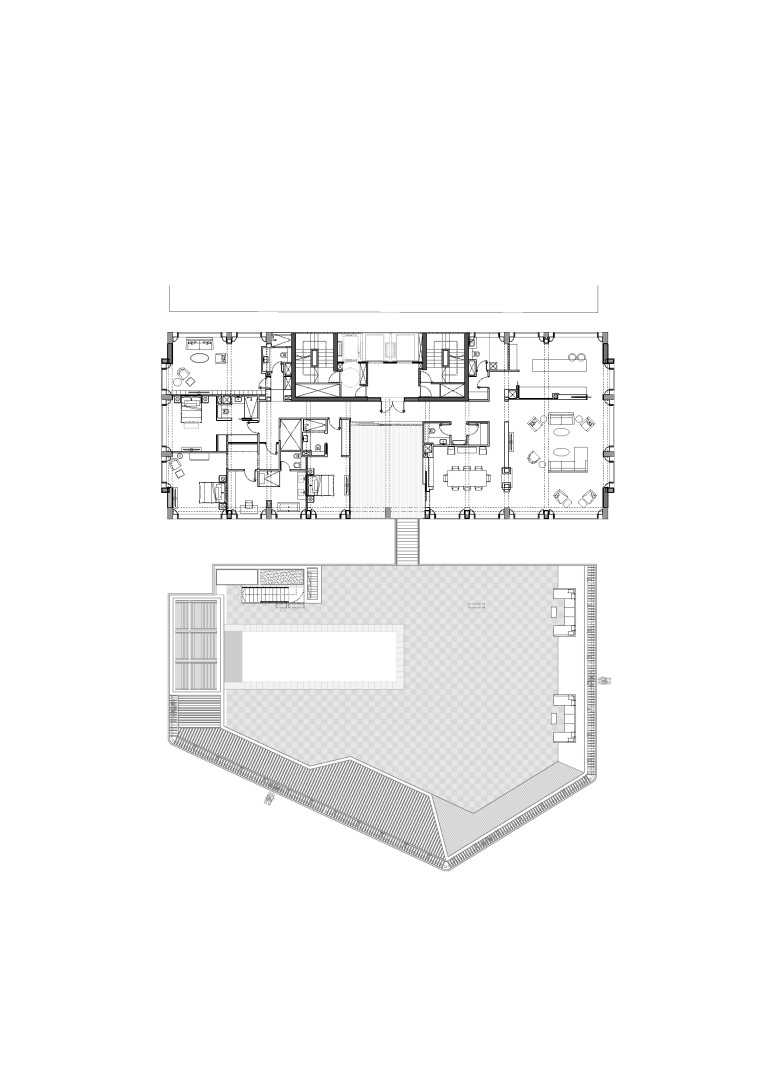 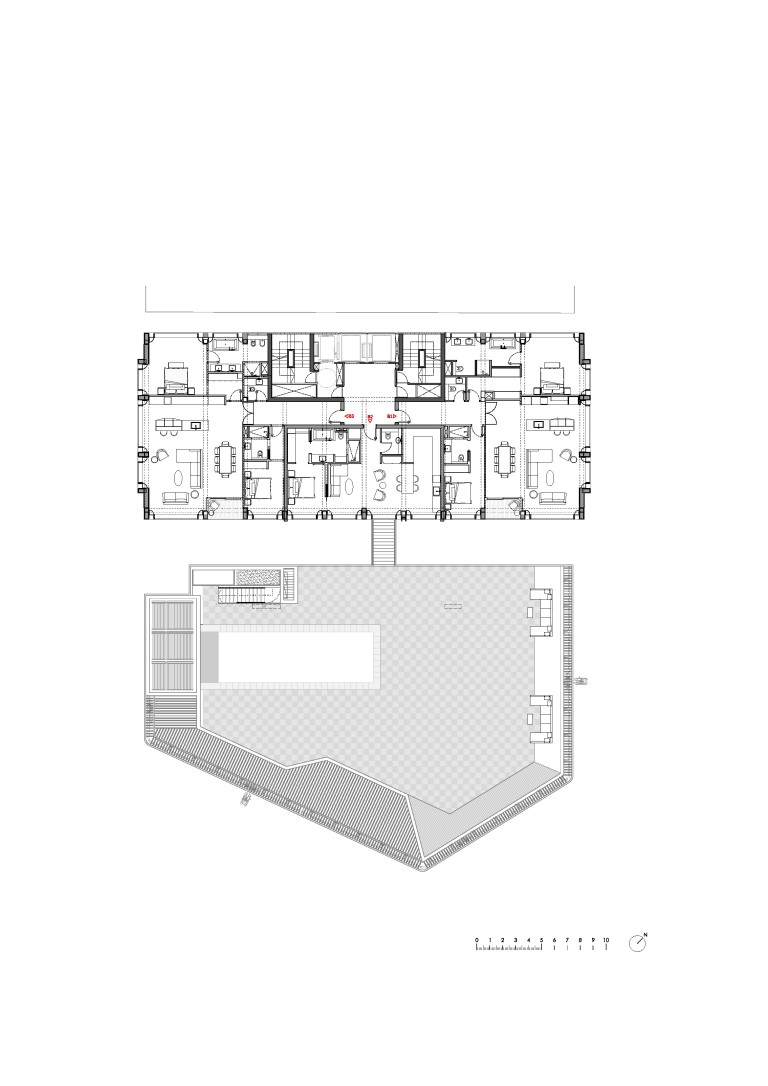 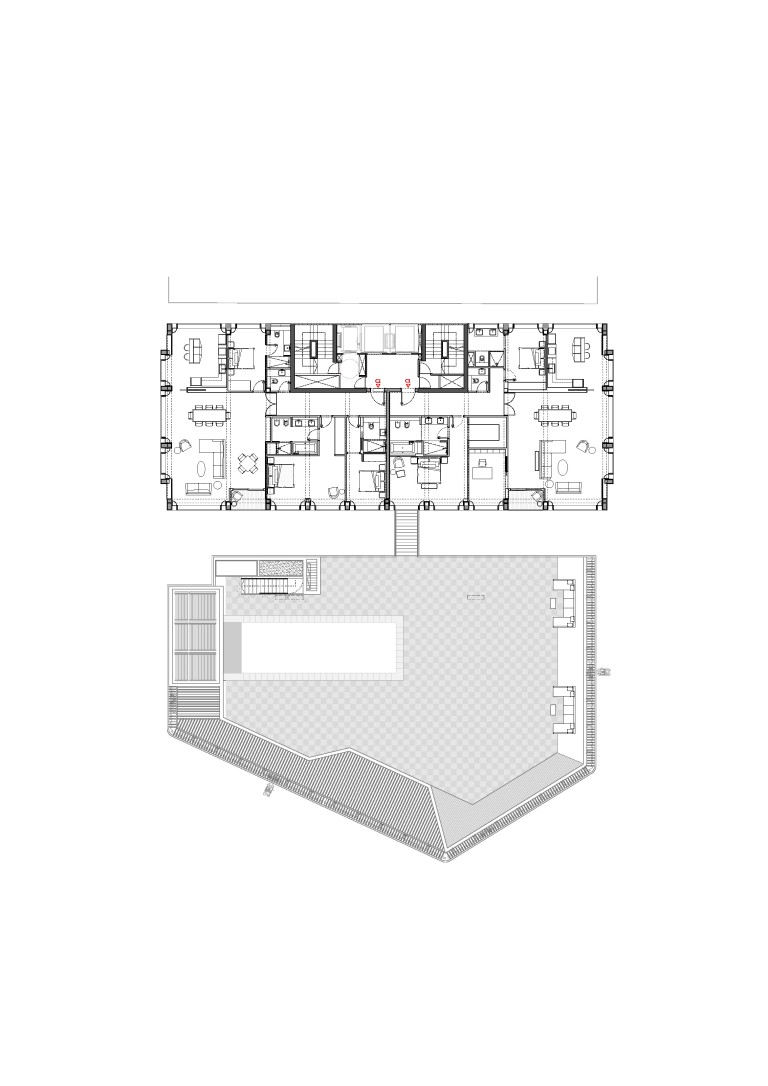 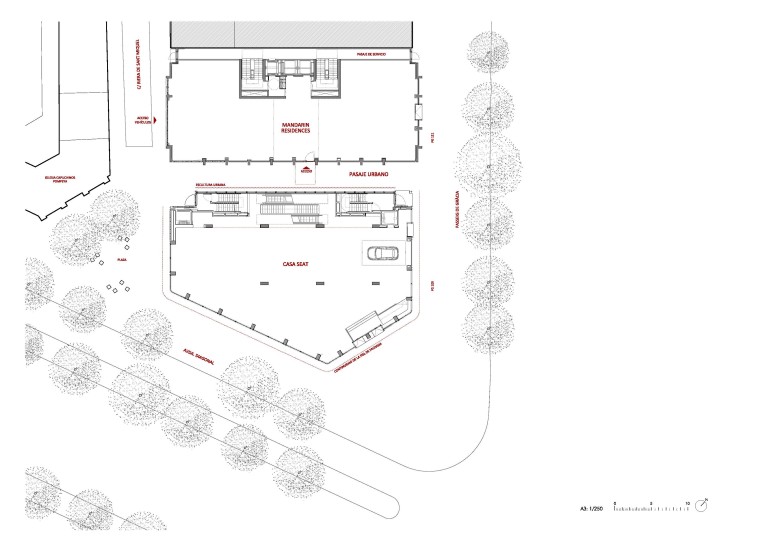 Cerdà intended his plan for Barcelona’s Eixample to start out from a spot that would later be called the Cinc d’Oros—the Five of Diamonds—adjoining the barrio of Gràcia.

In that location Ildefons Cerdà had Avenida Diagonal intersect with Passeig de Gràcia, the two foundational and main axes of the city’s expansion, and upon this schema he described the grid. Francoism eradicated the Cinc d’Oros as a location and eliminated the sculpture symbolizing the Republic. In 1957, following a competition in which some of the finest architects in Catalunya participated, Deutsche Bank chose the proposal for its bank building that has survived to this day. Hieratic and ostensibly monumental, the edifice obtained a license but remained outside current planning norms, due to which the only alternative when remodeling and adapting it to the new uses and demands of the twenty-first century would entail a remodeling which remained absolutely faithful to the volume and profile of the existing building.

Its design draws on what is already there by cutting the building into two independent volumes that create a passageway which meanders between them from Passeig de Gràcia (Els Jardinets) to the half-turned Church of the Capuchins (Pompeia) on the Diagonal, forming a small square at the end of Riera de Sant Miquel at its meeting with Avenida Diagonal.

The front volume with its bronze structural façade with large plate-glass windows and an institutional character, destined to become the new headquarters of Casa SEAT, has a split-level ground floor and five floors and intermediates with the neighboring buildings forming the frontage of Avenida Diagonal. The new stand-alone pentagonal volume eliminates its obelisk-facing curved side whilst delineating its curvilinear-shaped corners, arriving at a façade that is continuous on four of its sides, presenting its rear façade to the passageway as a blank wall, a support for a large-scale urban sculpture that will accompany movement along the passageway.

The framework forming the façade, placed on top of the building’s existing perimeter supports, absorbs the forces of the wind and constructs the compositional grid.

Six meters from the ground, the canopy is open to the visual cone of the passer-by whilst offering protection from the sun, especially in summer, as does the bronze serigraphy of the windows on the upper floors.

The constructional materiality will enable both buildings to be understood as a single entity with the intrinsic differences of use of each of them.

In doing so, the new project constructs a pedestrian passageway, an urban space which articulates a complex proposal at the same time as it differentiates the new uses and offers to the city a permeable and contemporary design in one of its most emblematic and central locations.