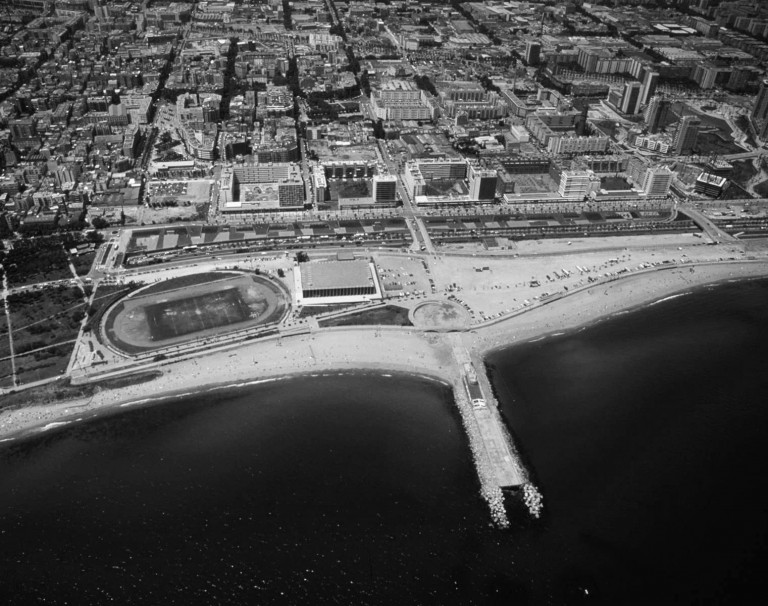 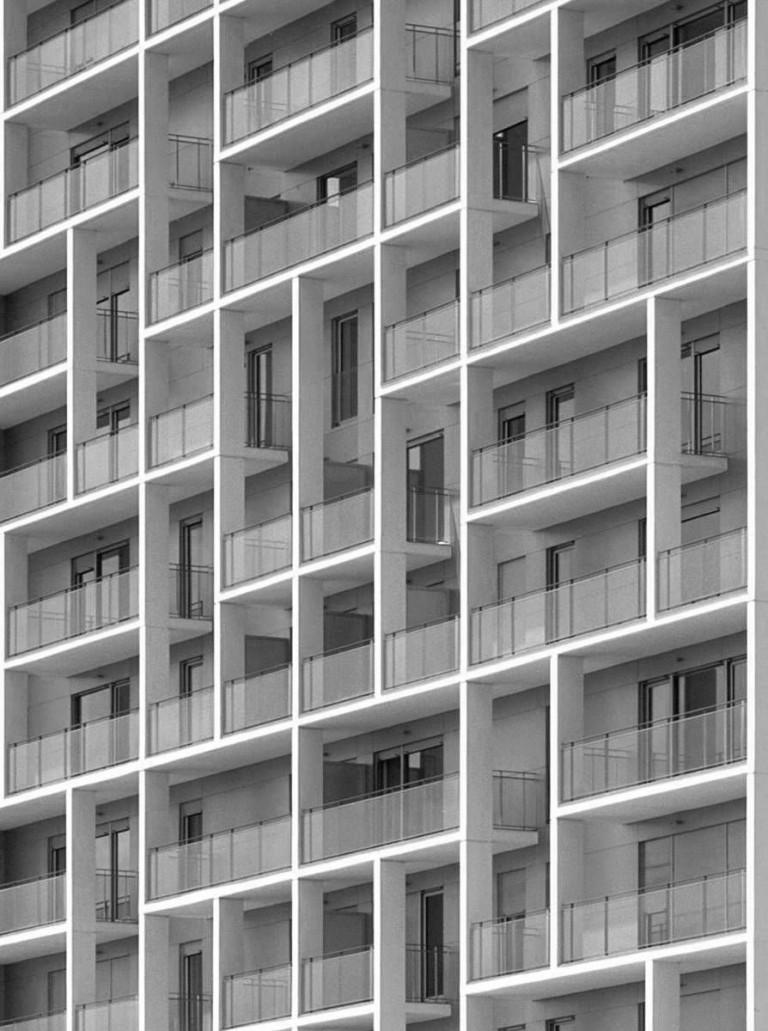 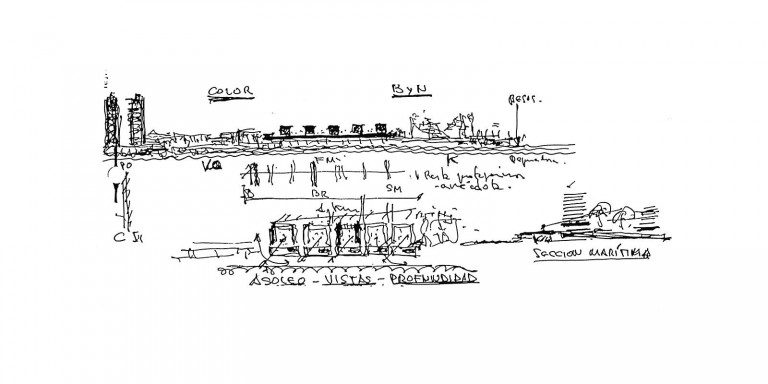 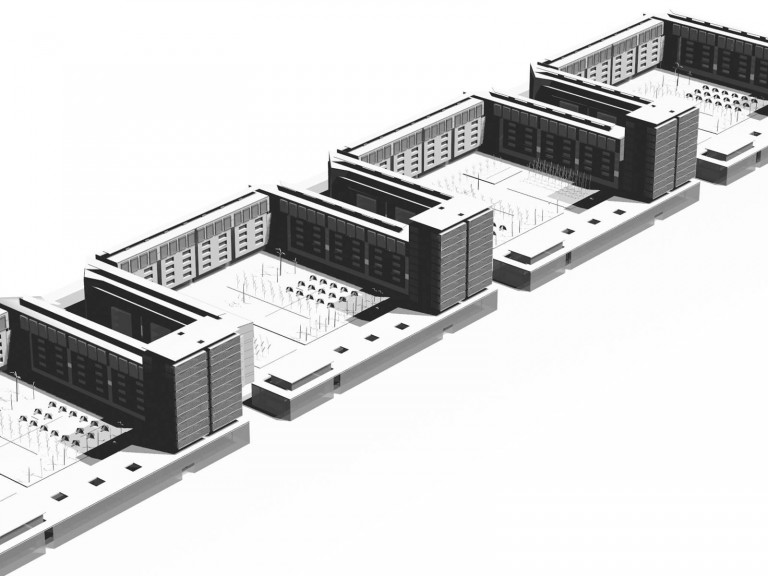 The Barcelona Seafront. This plan contemplated not only intervening on infrastructure but the possibility of constructing housing and some services by demolishing a vast area of old factories. The most important building operation was, without a doubt, the Olympic Village, which managed to reestablish an urban continuity of sorts between the city and the barrio of Poble Nou, thus reestablishing the historic connecting thread interrupted when Barcelona opted to abandon the sea and grow perpendicularly towards the interior. Along with this, the plan accommodated a private housing development on the three city blocks occupied by the Torras Herrerías y Construcciones factory, with a dual purpose. Firstly, two of the three blocks were to house the Olympic judges during the Games. Secondly, given its proximity to the Olympic Village, this operation was to be one of those that would give rise to the process of urban reconversion of the rest of Poble Nou. The architect Carlos Ferrater, with his team of collaborators, won the commission following a restricted competition held between various architects. His project took its place among the general run of interventions that were to be ready for 1992 and constituted an outstanding opportunity to reconstruct, in the one intervention, three blocks of the Cerdà Ensanche previously occupied, exclusively so, by industrial buildings. The area of the three blocks, mutually aligned and running parallel to the coastline, is delimited by the Calles Llull and Ramón Turró and, in the sea/mountain direction, by Calles Zamora and Ávila, a complex the developers baptized as the Eixample Marítim—the Maritime Extension—in allusion to the persistent design of Cerdà’s urban development and to its proximity to the sea. Only the area adjacent to Calle Zamora could not be reconstructed in its totality due to the presence of industrial buildings belonging to other owners. The popular Can Torras dels Ferros was, as we’ve already seen, one of the most important metallurgical industries of Barcelona. The industrial process consisted of the casting, laminating and construction of frameworks to be used in buildings, boilers, railroad material, etc. A narrow-gauge railroad of its own linked these different processes by crossing the streets, and another, normal gauge system connected the factory to the rail link to France via Granollers.

The bulk of the finished design consists of 560 dwellings of various sizes and types, commercial premises on the ground floor, some offices and a shopping center. The three blocks have a uniform architectonic treatment and are linked by a tree-lined walk that traverses their interior gardens in approximately the same line that the train tracks once ran in. In the garden of one of the three blocks a swimming pool has also been included. The perimeter of the blocks is built up but the constructed bar is interrupted by the aforesaid walk and by a few passageways or alleys situated opposite the pedestrian crossings on Calle Ramón Turró, which separate the chamfered corners and configure them as seemingly higher buildings. The ground floors are transparent, meaning that from the street one can see the vegetation inside the block; moreover, at different points they enable one to penetrate to the interior. All in all, we could say that thus far this constitutes the built example that comes closest to what Cerdà proposed as an alternative to that industrial Barcelona suffocating behind its city walls.

Perhaps when these lines are printed it will still be possible to see the exhibition about the distinguished city planner being held in the barrack buildings the Universidad Pompeu Fabra is hoping to occupy. The Barcelona city dweller has here, within easy reach, a golden opportunity to clear up a few misunderstandings and to increase his capacity for critical judgment about the city; that is, his civic culture. Before, we outlined the twin vocation Barcelona displayed to develop across its flatland, schematically represented by two perpendicular directions.

At first, by constructing its neoclassical seafront from Montjuich to Ciudadela Park and the Old Cemetery, a failed development that could have taken the axis of Gran Vía as the backbone of a growth running parallel to the coastline. According to Cerdà’s plan; and as another tendency, in a second and correlative act, by effectively growing along a line perpendicular to the sea and producing a city whose frontage remained folded in upon itself, being identified with the actual façades of the Paseo de Gracia. We could perform a simple critical exercise and compare the characteristic city block that constructed the fabric of the bourgeois Ensanche, and later its lateral extensions, with the one that a century later has been successfully built on the same urbanistic layout but on that marshy territory that was set aside for the cemetery, the railroad, the factories and the industrial proletariat. Put very briefly, we could claim that the history of the construction of the Ensanche coincides with the process of densification of the city blocks, to the point of leaving no trace of any space within them that might be deemed to be open or possessed of some civic meaning. The side of a typical city block is 113 m long, with chamfered corners of 20 m, which is also the width of the normal street. In the built Ensanche the tenements are on an average 28 m deep, such that, subtracting the crown, there are patios with sides of some 57 m, with, therefore, a surface area of 3,249 m2. But almost all these patios are also built up on the ground floor and their visible surface consists of the roofs of warehouses, garages or workshops, such that the little earth there might be must be sought in people’s flowerpots.

From the air a block looks like a patchwork, an entity made from patches of built-up land lots; it is uncommon to see a tree and in the best of cases the inner courtyard preserves a certain regularity. The block is, then, a solid and massive prism, intransitive with regard to the street, the outcome of a consideration of the city as pure merchandize, of a mean-spirited and money-grubbing attitude that, hypocritically, has sought to redeem itself with the alibi granted to it by the beauty of a few buildings, in particular those of the Modernista architects. A tremendous irony if we consider the annoyance these architects felt at seeing their buildings reduced to simple decorative façades and if we also recall that Gaudí, one of the most vaunted, ended up begging on the street. All the same, we think that despite its congestion and this alienation the Ensanche has not lost its potential qualities. The usury of the many has not won out over the generosity of a few (of a Cerdà, a Gaudí).

Let’s compare the above data with that of the project we are discussing. Here, the built depth is 12.70 m, such that the apartments have two façades and no small inner courtyard. The side of the interior courtyard of the block measures, then, 87 m, has a surface area of 7,569 m2, and is landscaped. The shopping center, on two floors, is the only building constructed in the interior of one of the blocks. The open space has more than twice the surface area of the historic Ensanche city block, and the courtyard is, moreover, completely regular. The streets that remain between blocks conserve the basilica section of three naves, with 5 m wide sidewalks, extended by a 3 m porch, and are related to the interior gardens both visually and in terms of pedestrians. The distance of each apartment block from its neighbors opposite is of the order of 80 m in the gardens and of 20 m in the streets and from the interior of the dwellings the trees in both spaces can be seen.

We could round off this quantitative data with a brief subjective description from the perspective of the individual living here. A gentle but dynamic local relationship exists. The commercial facility is still not finished but the more essential shops already exist. A wide stretch of blue sky dominates, the radiance of daybreak and the setting of the sun can be observed, and the passing of the day is punctuated by the presence of birds and the voices of children. The passing of the seasons is noticeable in the vegetation. In summer the chirping of the crickets forms an accompaniment without revealing its origin. The garden creates an effective microclimate and a fauna consisting of gulls, blackbirds, bats, sparrows and wagtails regularly pays us a visit. At certain times the silence is a delight and the relationship of the back bedrooms with the courtyards reproduces the one that exists between the cell and the cloister of the monastery.

Encouraged by, among other things, the protective, ecological quality of the garden, a veritable demographic explosion is taking place, which gives us a clue, in ecological terms, to the ecosystem the citizenry needs to repopulate Catalonia. The Honorable Gentleman and other authorities ought to take careful note… and more besides.

While recognizing that we are falling victim to a certain idealization, by way of contrast to a Barcelona intensely crushed by its own buildings, this example demonstrated that a balanced model of urbanization is possible, one compatible with a reasonable profit from real estate and without the need to come up with major inventions. To us a Poble Nou rebuilt according to this rule of thumb would be no bad thing, here where the trace of Cerdà persists. A monotonous Poble Nou in which the monotony might consist of the democratic repetition of the wellbeing of each individual, family or social group; of the recreating of a harmony between the built and the vacant, between the private and the public sphere, between stasis and movement—that harmony which, for the industrial city, Cerdà dreamed was possible.