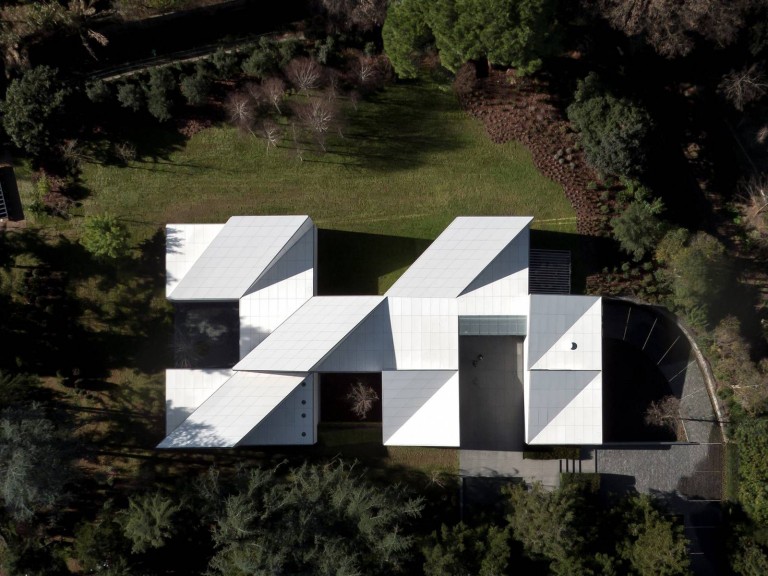 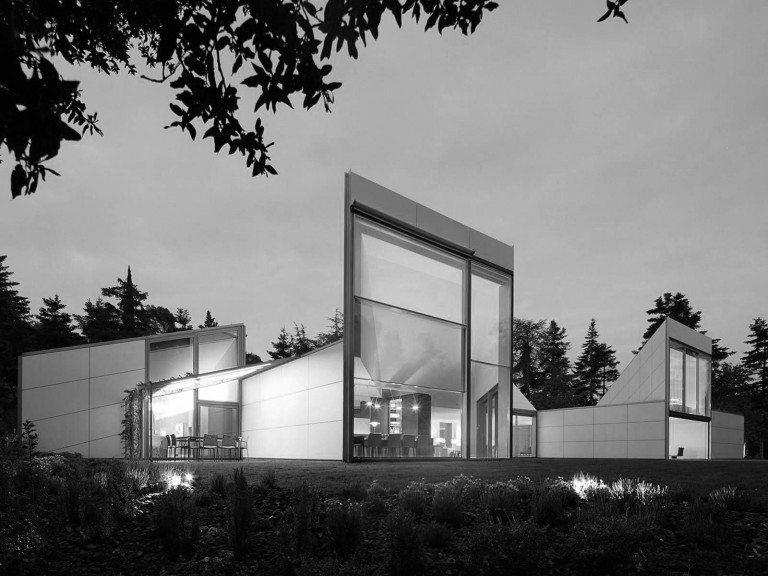 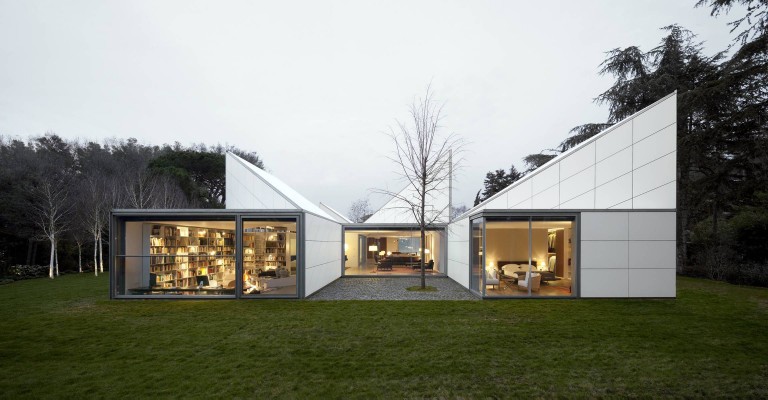 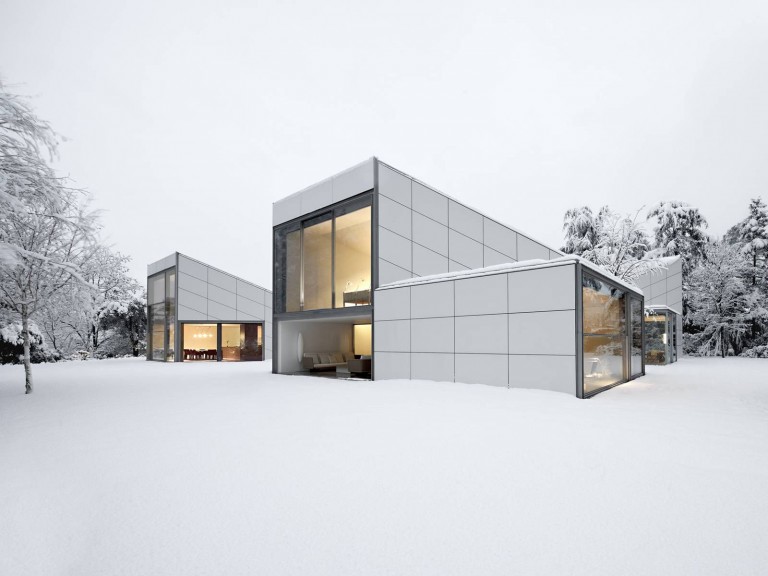 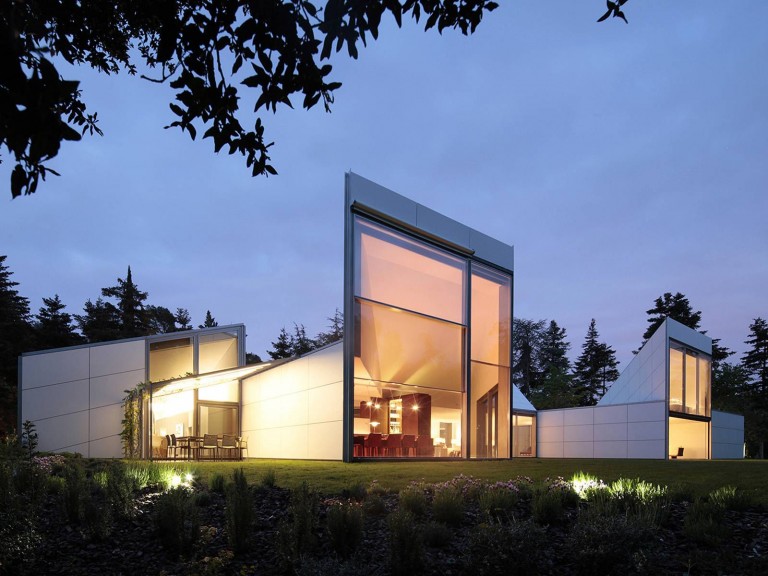 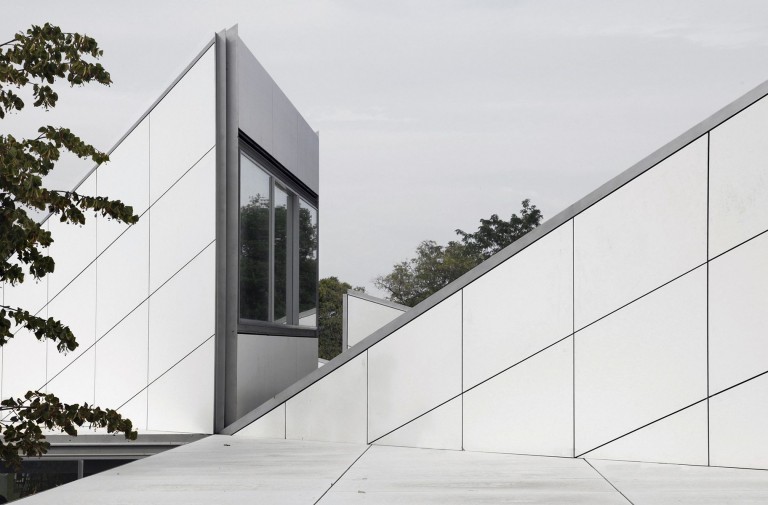 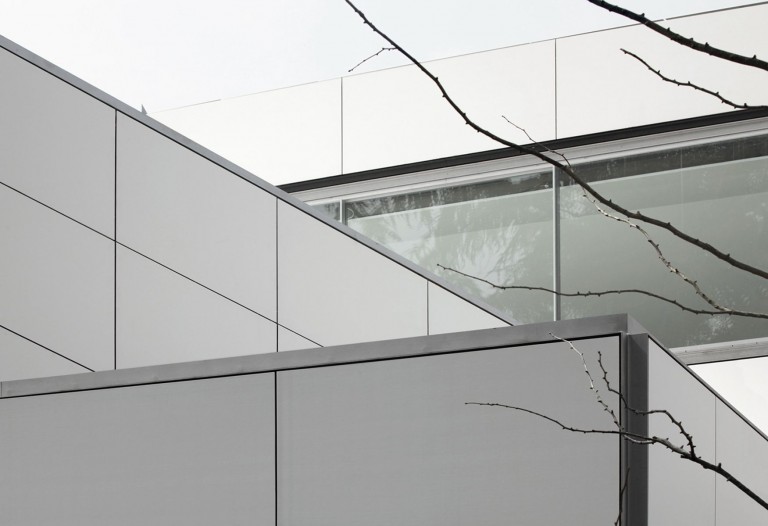 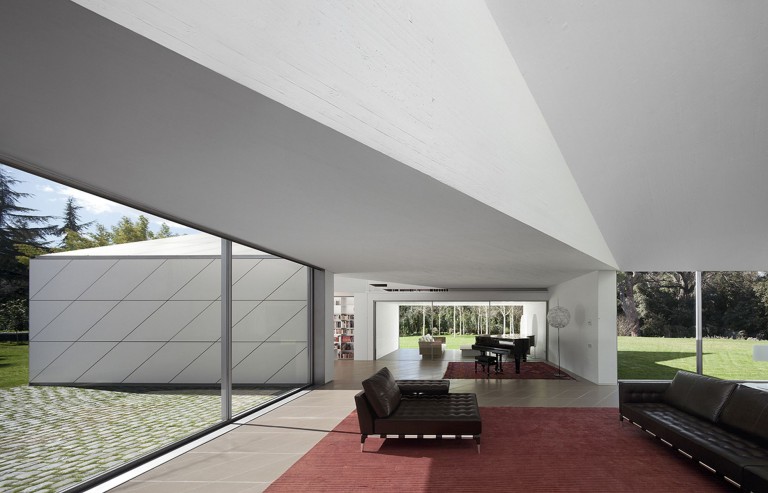 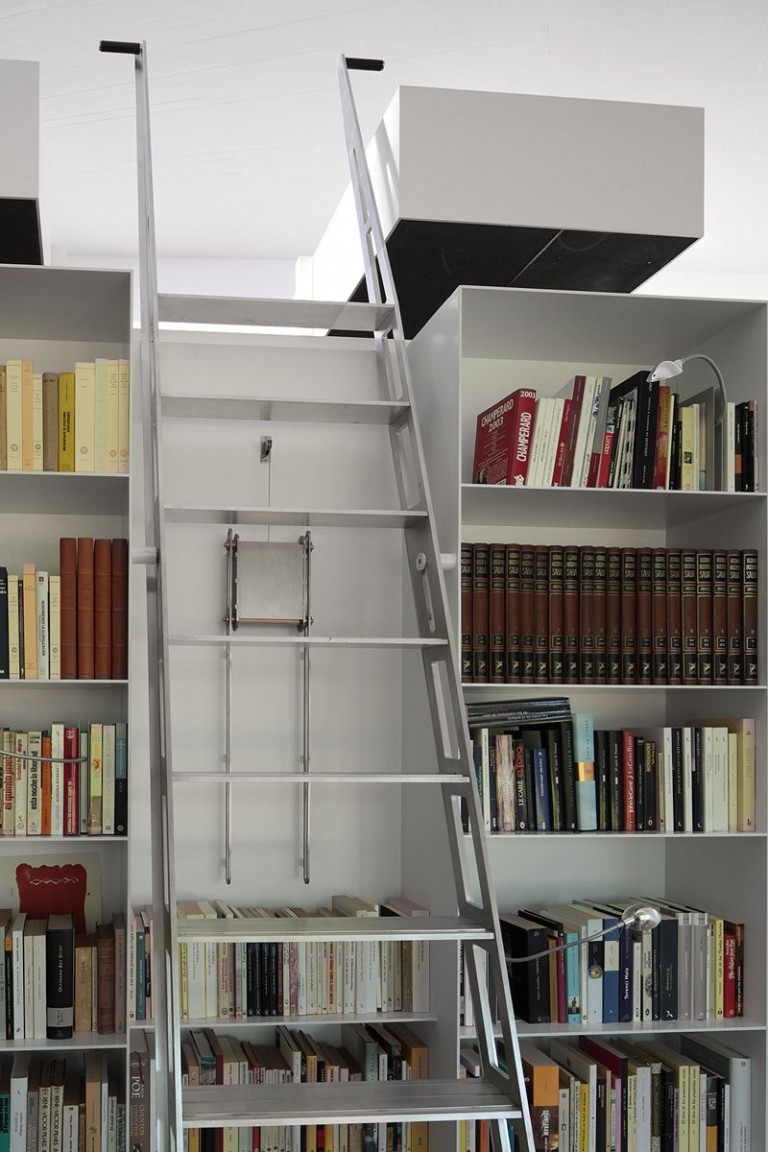 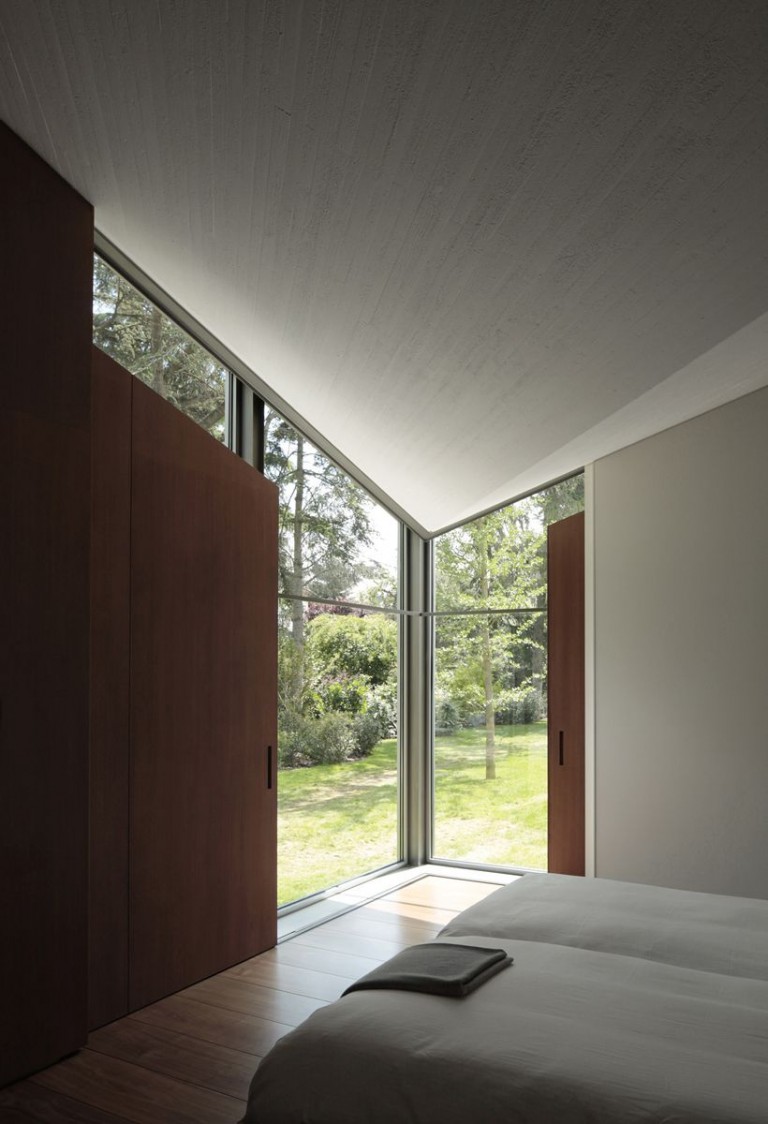 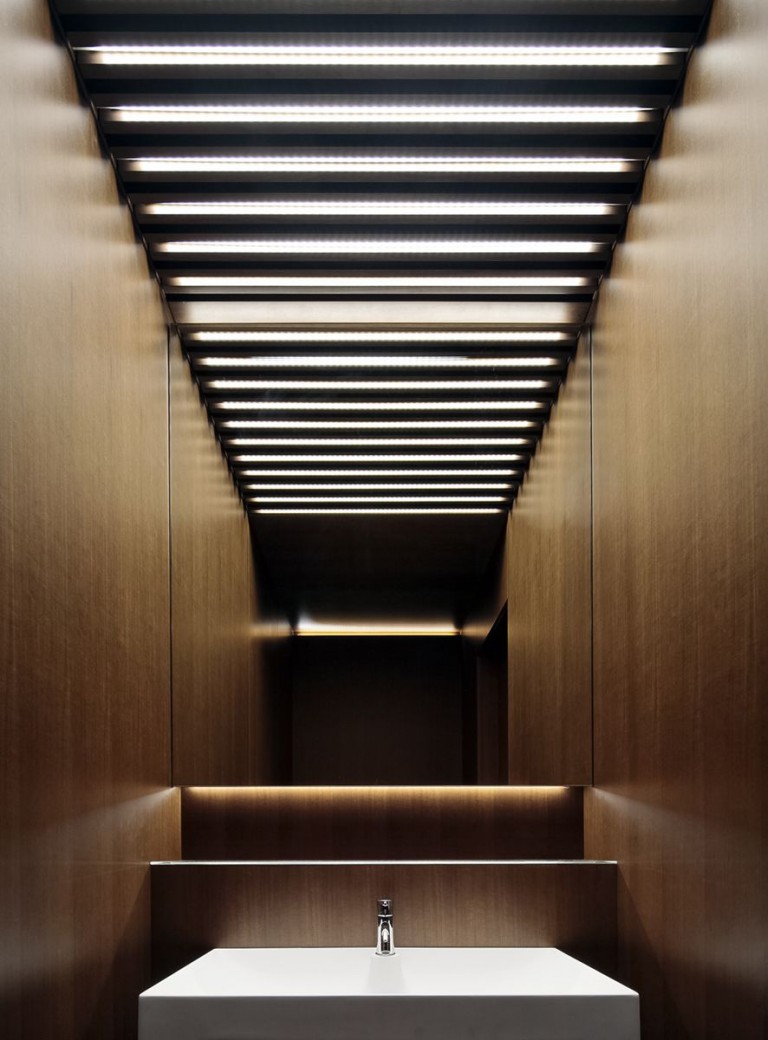 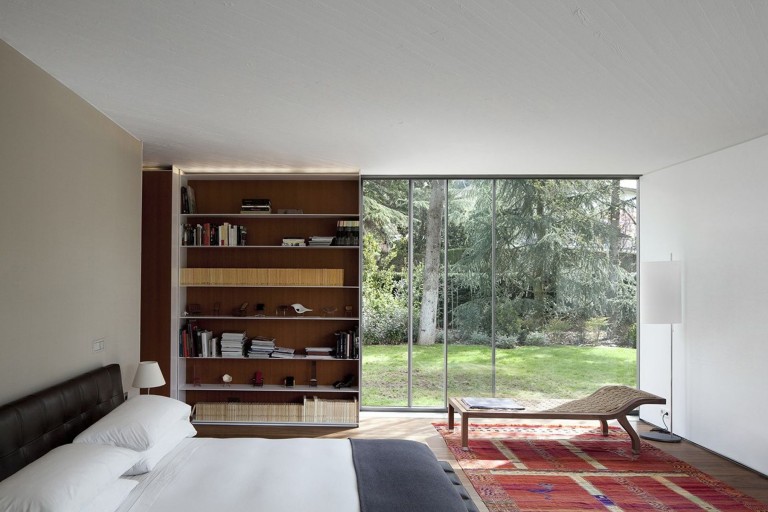 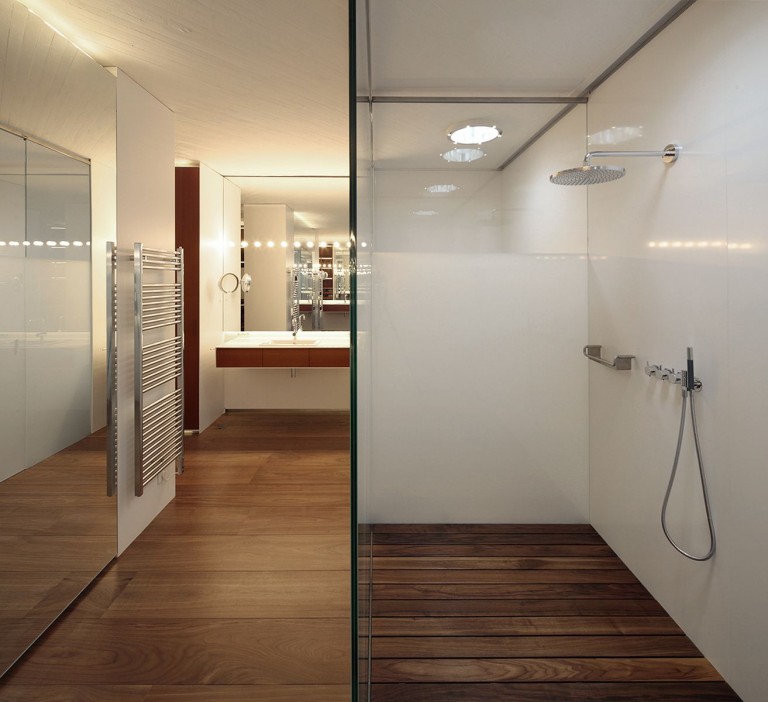 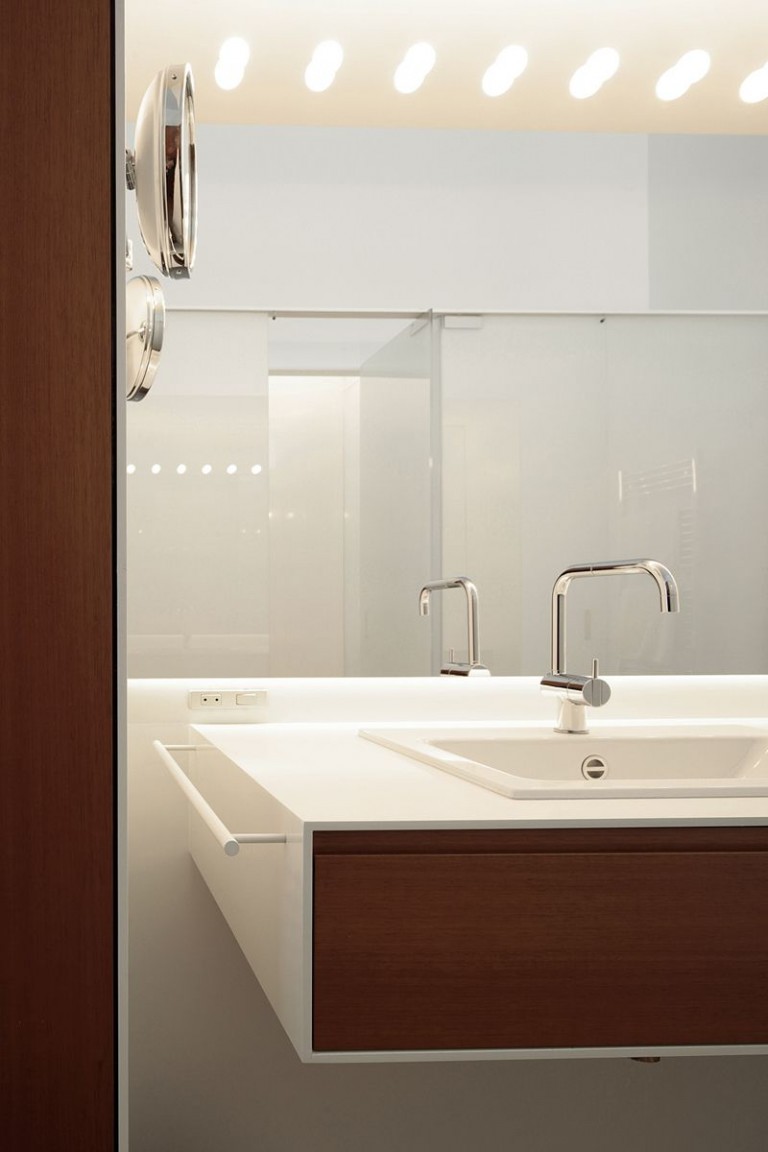 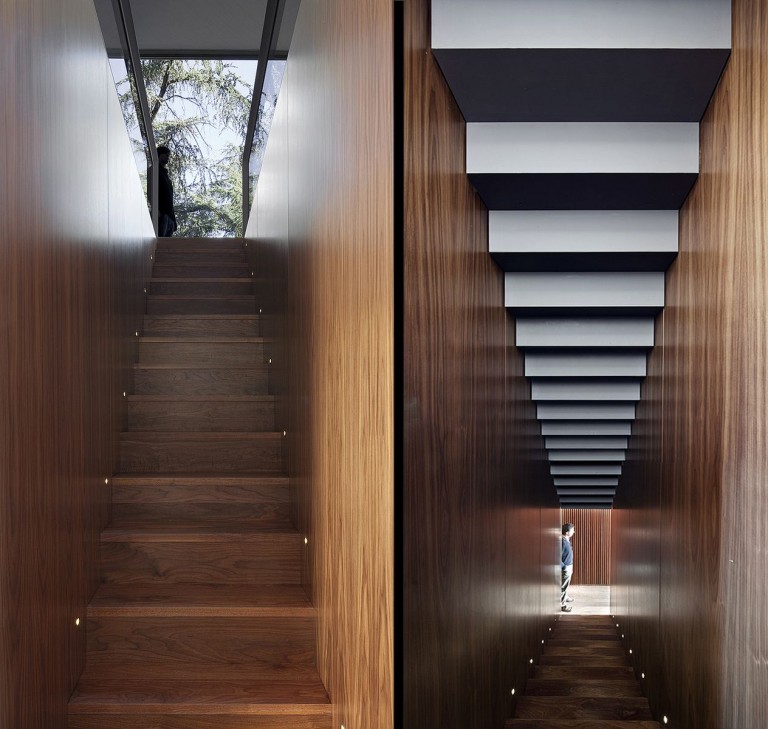 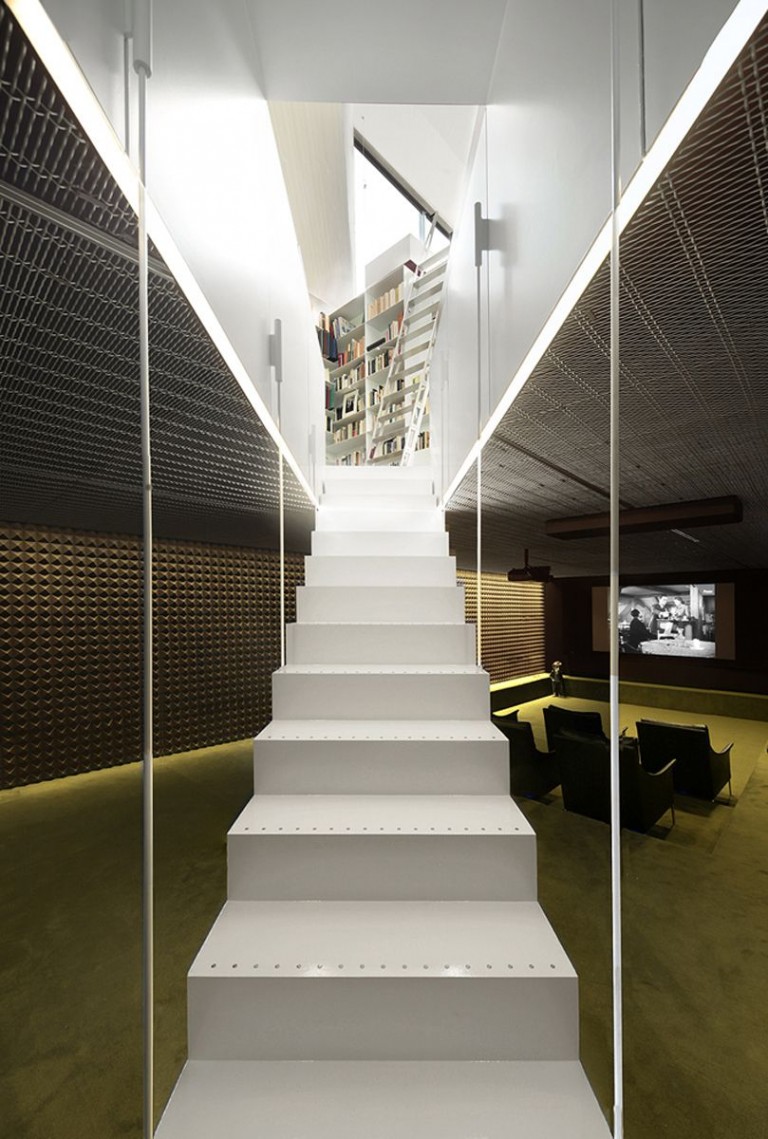 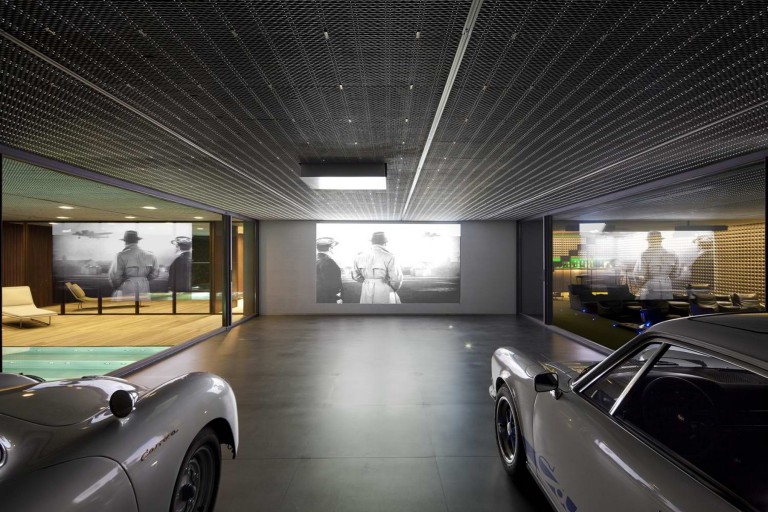 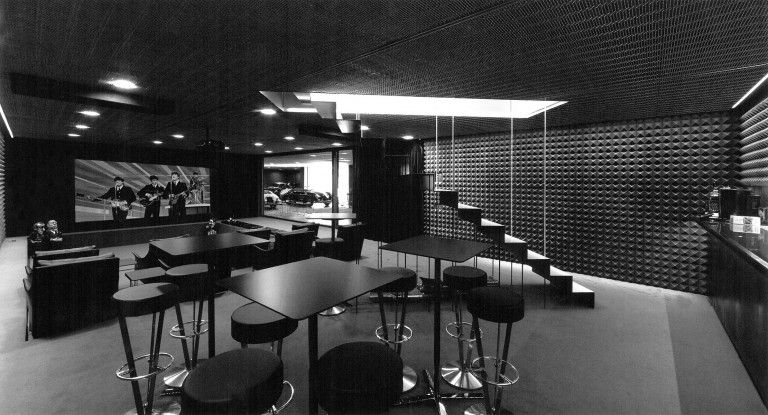 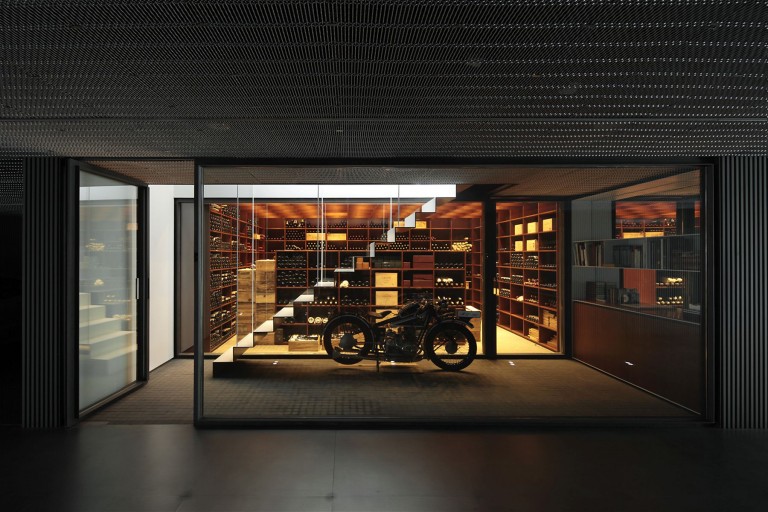 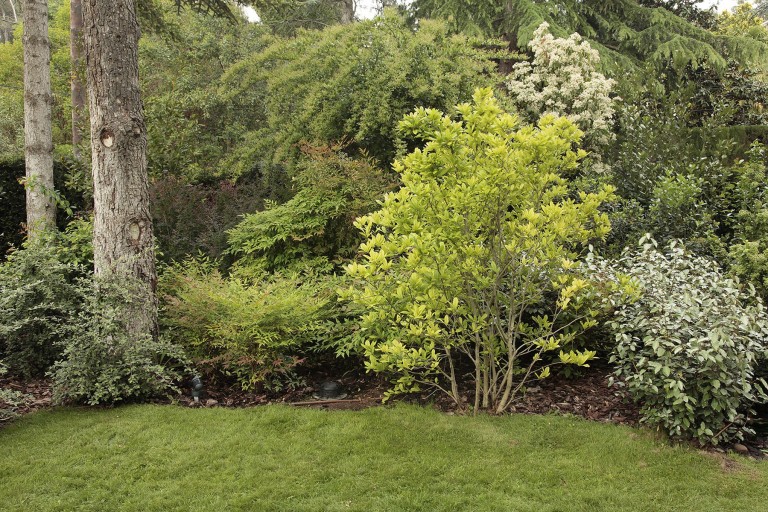 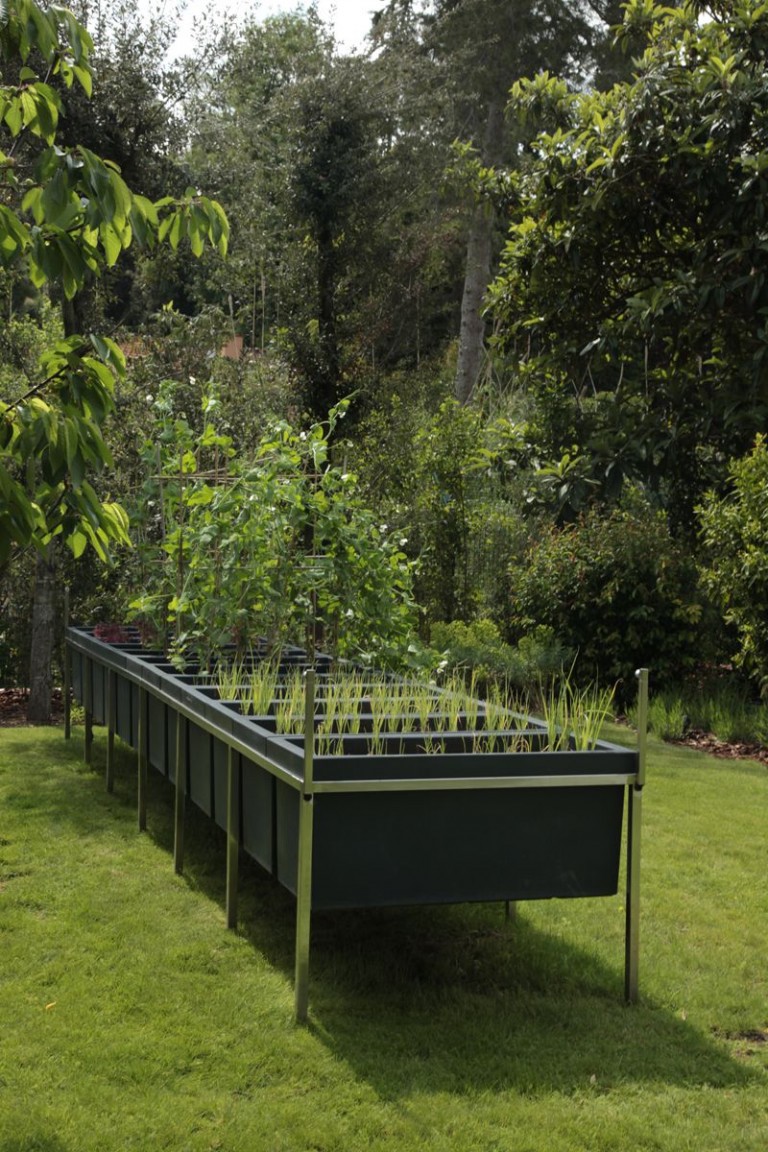 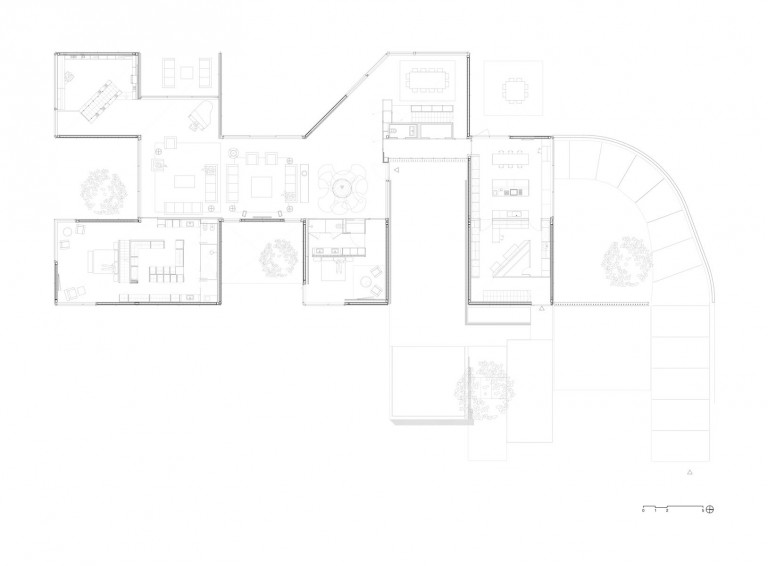 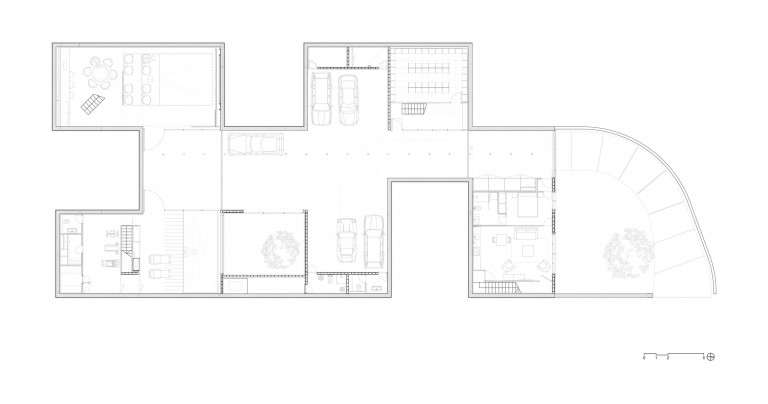 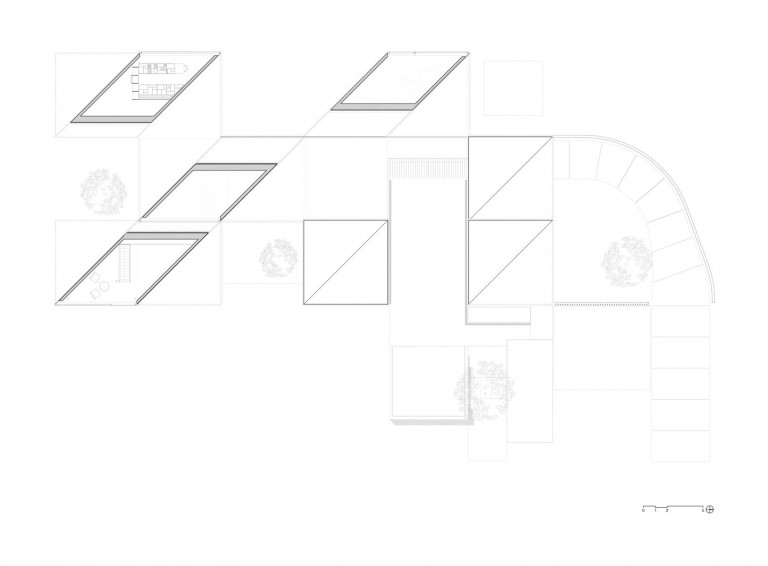 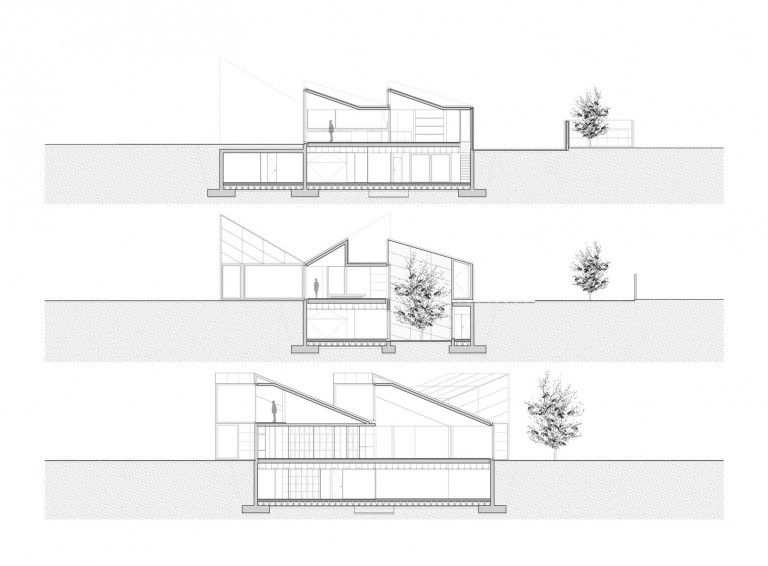 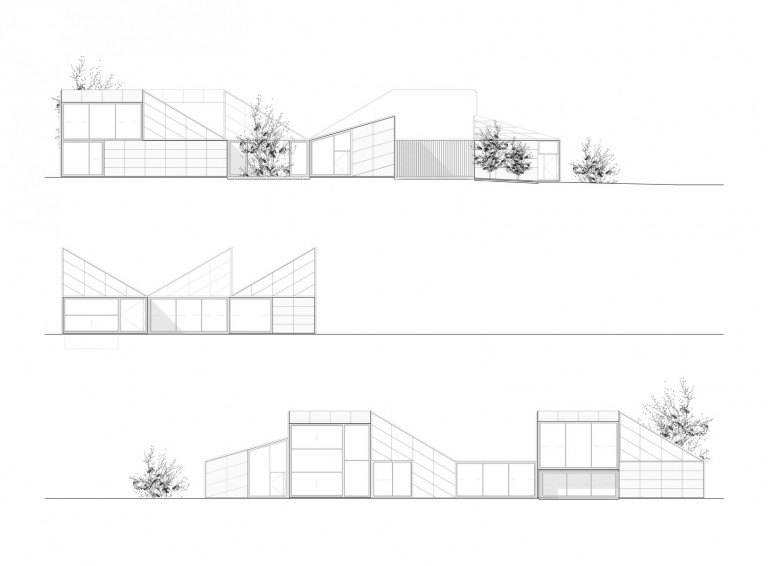 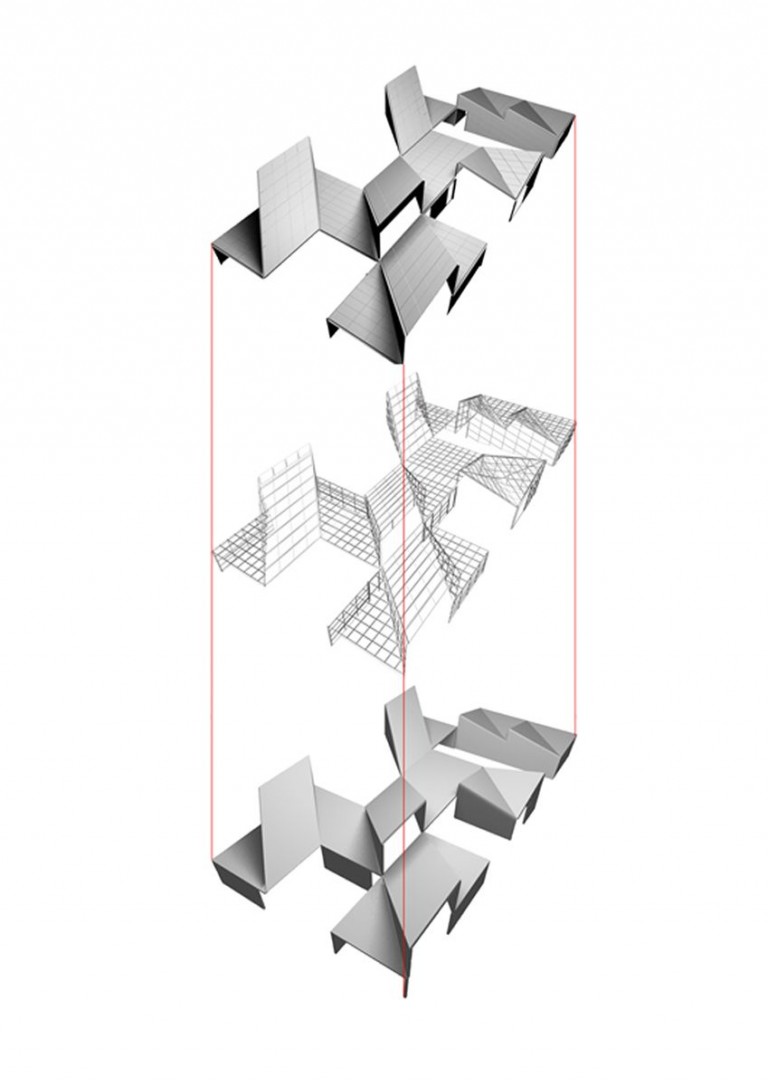 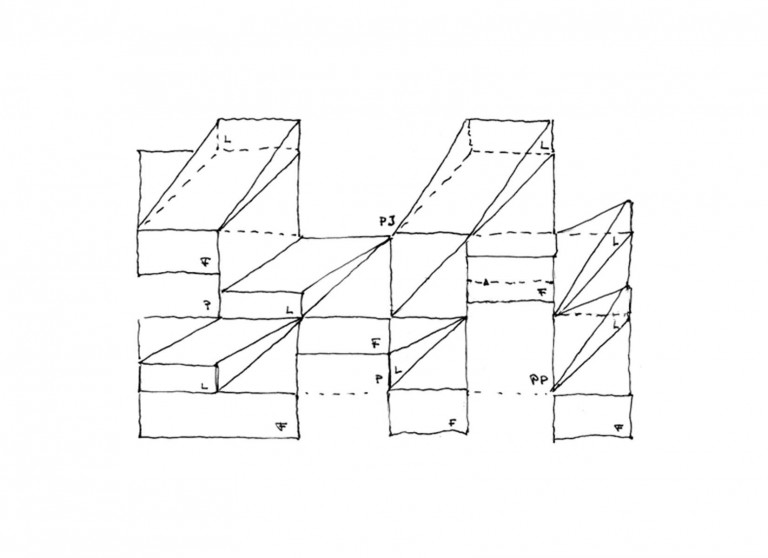 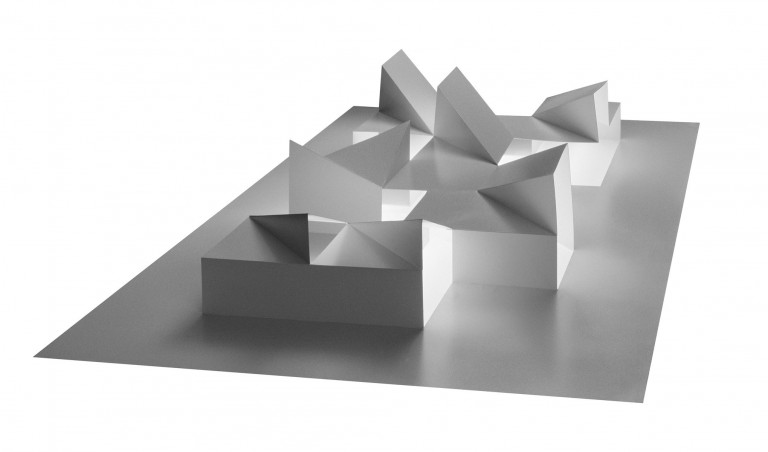 AA House by Carlos Ferrater and Xavier Martí is one of the most unique and intense single-family homes that has been built in recent times. It establishes a relationship with houses by Louis Khan, Alison and Peter Smithson, and Ray and Charles Eames.

Located in Sant Cugat, next to a forest bordering a golf course, the house rises from the road as a series of sloping roofs among the trees in the garden that form a magnificent belt of picturesque scenery.

On entering, the house greets us with a pool of water, an allegory of one of the four elements and born of a desire for reflections. Before entering, a totally austere plaza is defined. And upon entering, you discover a great longitudinal space, defined by skylights in the sloping roof. This great interior space is at once perfectly on a human scale.

The unique and unsettling fact that there appears to be no staircase and that none of the service facilities of the house are visible, all hidden away on a lower floor, leads us to believe this is not a house but something else; it is many houses at the same time. It is more of a pavilion than a house, given that the only thing to emerge IS a large open level of rectangular panels in a bright white, as if it were a temporary .Japanese pavilion or a marquee. The house is surrounded by grass, as If It were Itself a form of plant life, and floats above it, taking on a mythical and imaginary image. It is reminiscent of the volumes of La Ricarda, the house by Antoni Bonet Castellana.

From the inside, rather than a house to stay in, it becomes a large camera. This sensation owes much to the orthogonal floor plan, perceived as diagonality and dynamicity; the cross section develops into inclined volumes capturing views of the landscaped garden and of the distant landscape beyond, incorporated into the landscape surrounding the house.

In short, it is more than a house, or even a pavilion or a camera; it is like a boat anchored in a green sea of grass. The stairs of this boat are what reveal this secret quality, hidden inside this light and airy house, which seems to be on the point of floating away. The four staircases leading to the lower domains are always hidden and always narrow, like those on a boat. A staircase reside the dining room and kitchen leads directly to the basement. There is a narrow staircase in the bedroom, which, also styled like those on a boat, leads between the walls directly down to the indoor swimming pool and sauna. A light and modern staircase goes from the library directly down to the cinema room, the space for fantasy and dreaming. Finally, there are service stairs leading down from the entrance, next to the kitchen, to the domestic staff apartment.

There are other stairs, also an important feature and, likewise, in the style of a boat, that go up to the higher levels, such as the lightweight contraption that unfolds like a ladder in the library and leads up to a loft where the owner’s map collection is kept, the observatory of the world. The kitchen is another house, a world opened completely onto the garden and bathed in natural daylight, a systematic laboratory of nutrition, care, cleaning and work.

It is a house and it is the contrary: telluric and anchored at the base, and yet light and floating like a balloon about to leave the ground. It takes us back to the idea of a “house” as an authentic archetype as understood by Gaston Bachelard and Luis Barragan: with a basement and an attic. With all of its intensity and meaning, this house contains all the symbols. It is a house on pleasant land, all garden, which floats above the grass.

It is not a house. It is many houses. This is what makes it so unique, mythical, archetypal and unsettling. It is a world of illusions: it is a pavilion that floats on a green sea; it is a large camera to capture the surroundings in a thousand ways; it is a boat moored to the trees; it is a balloon about to take to the sky, anchored to the ground by a basement full of machines. it is, in short, the secret World dreamed of by two collectors.

The house follows some basic and very simple rules of geometry, which is where the strength of the project lies:

A 7×7-metre orthogonal network on which the diagonals of this network are overlaid as in a musical staff, the base on which the composition of the project is formed.

The 45o diagonals are the generatrices for the expansions occurring on the roof – skylights in some cases and double heights in others – to produce an artificial topography that rises above that of the terrain.