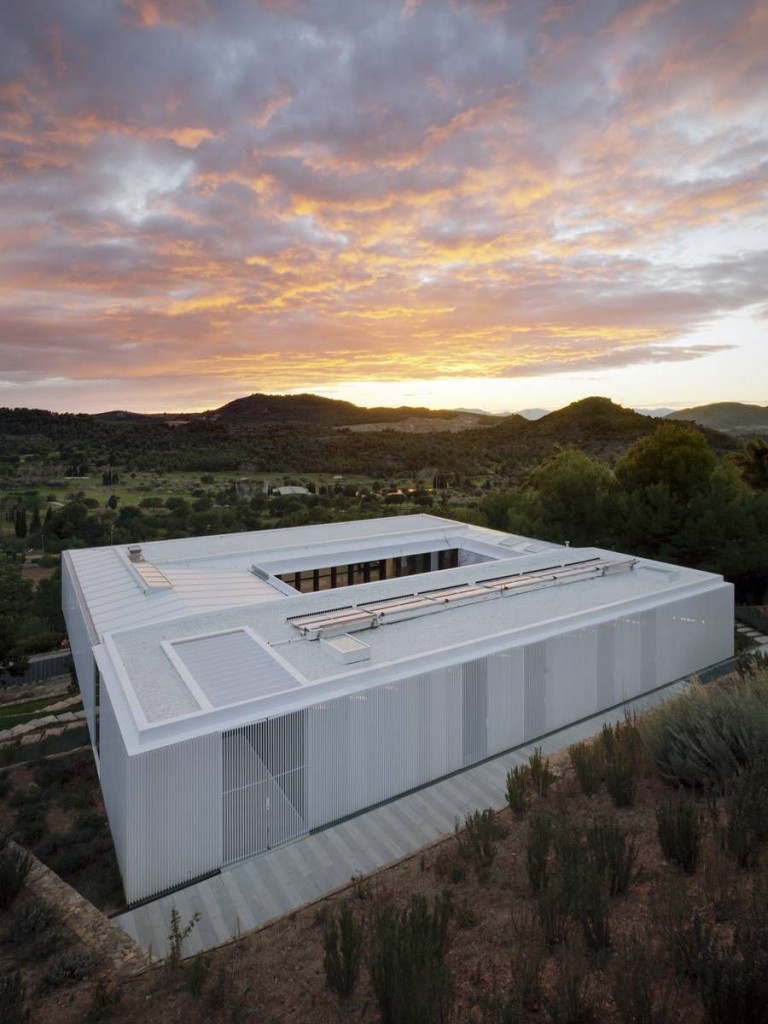 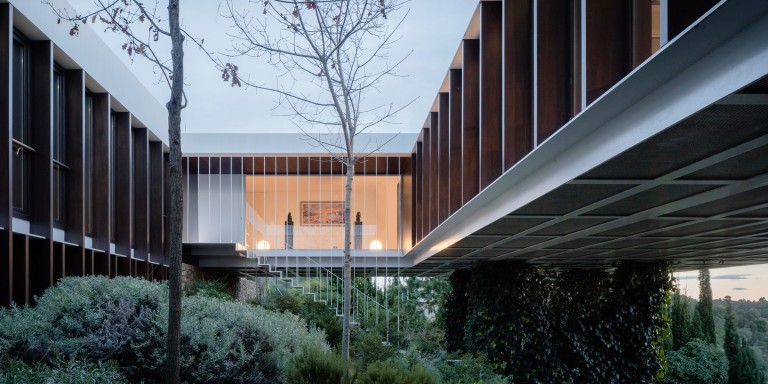 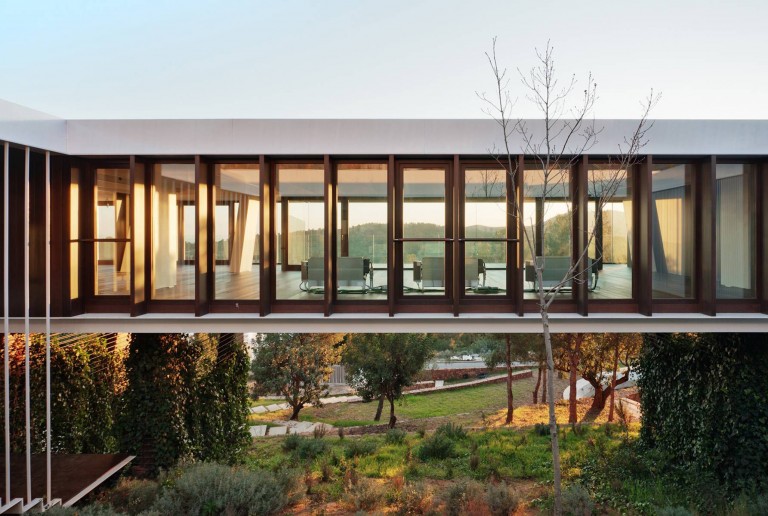 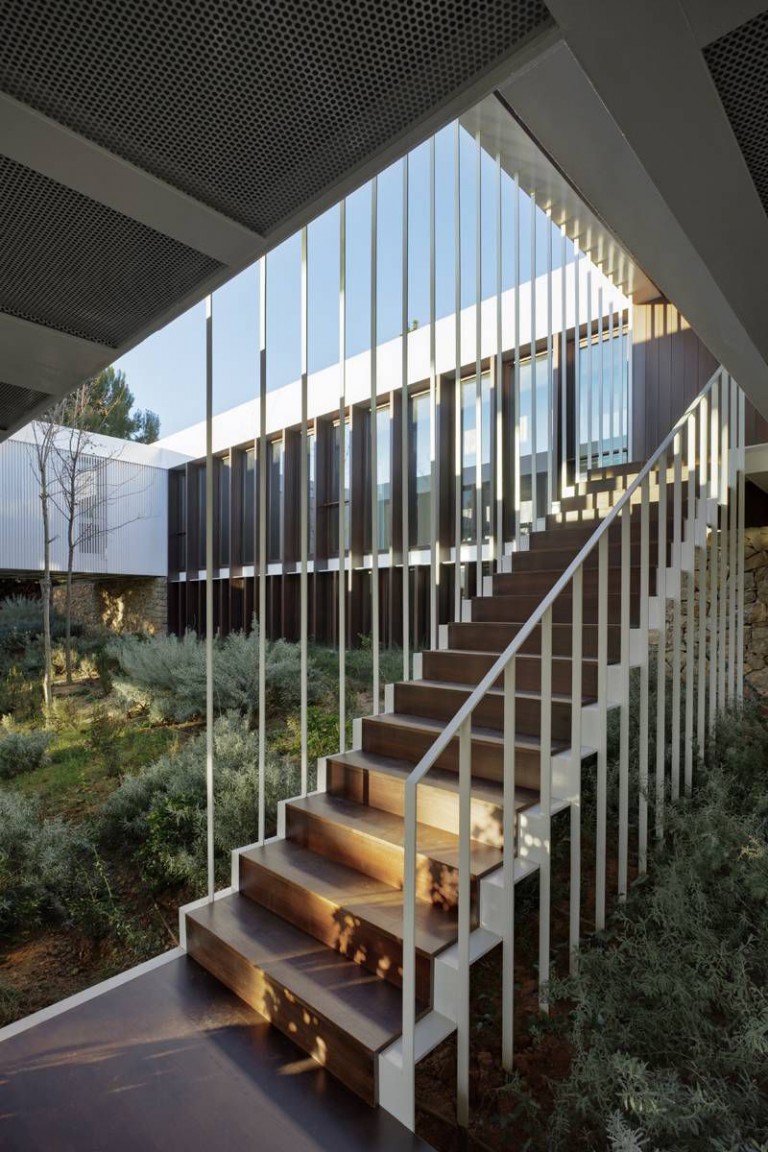 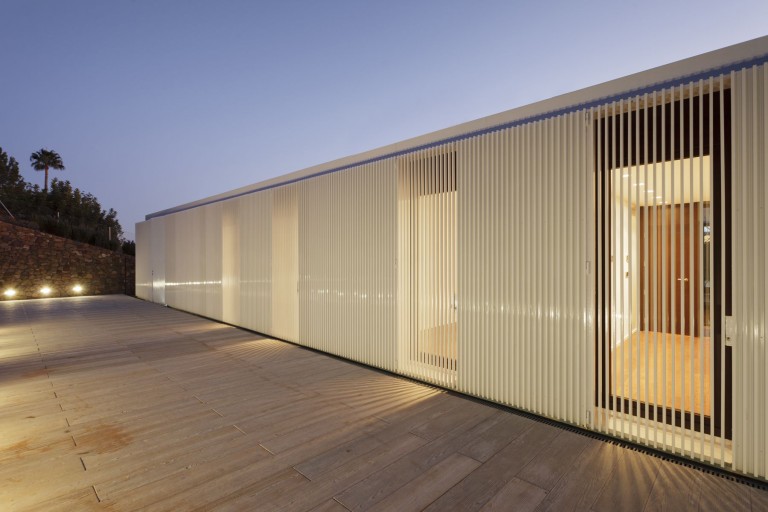 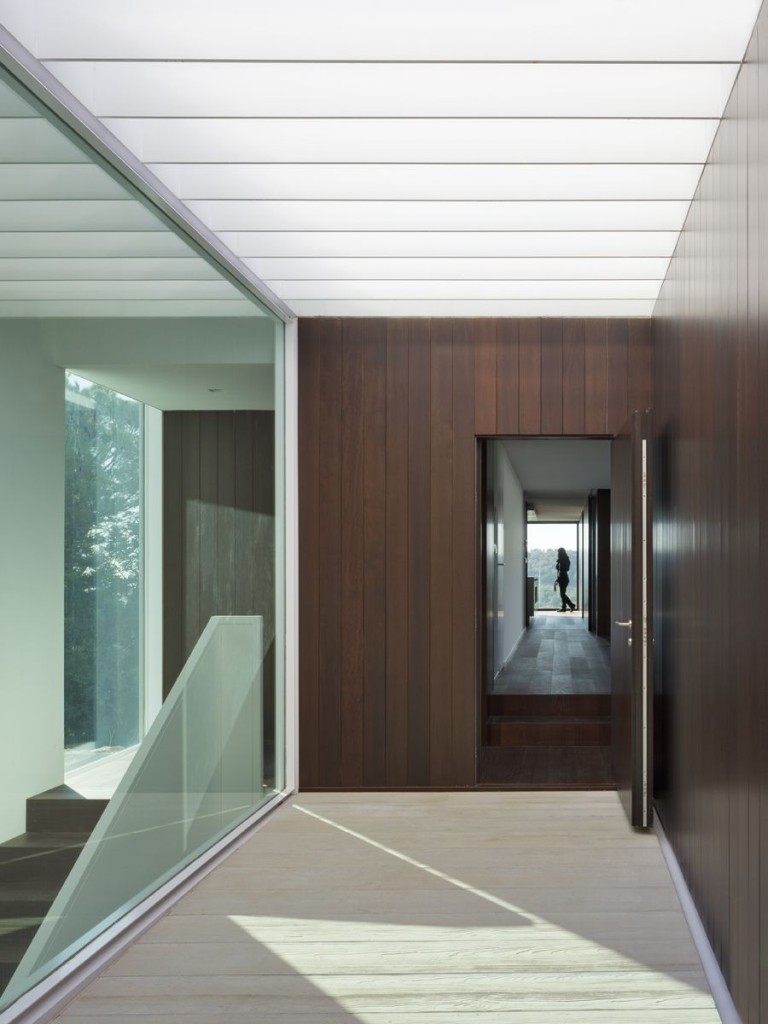 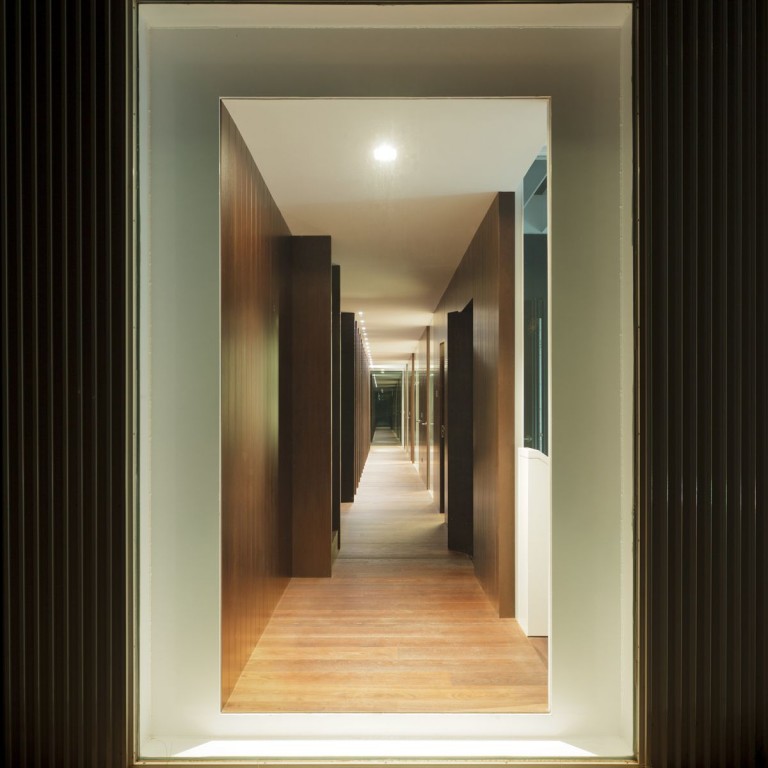 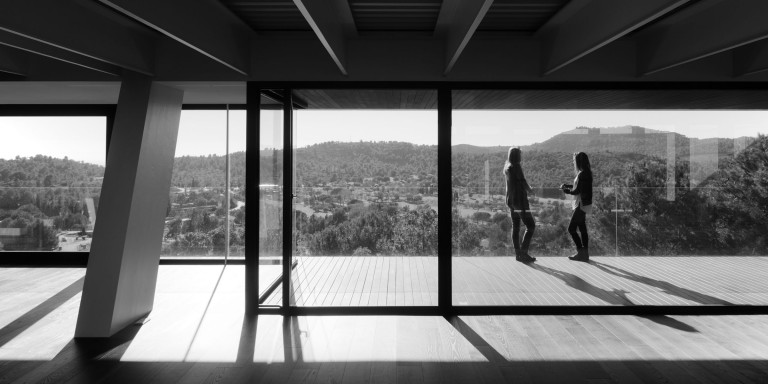 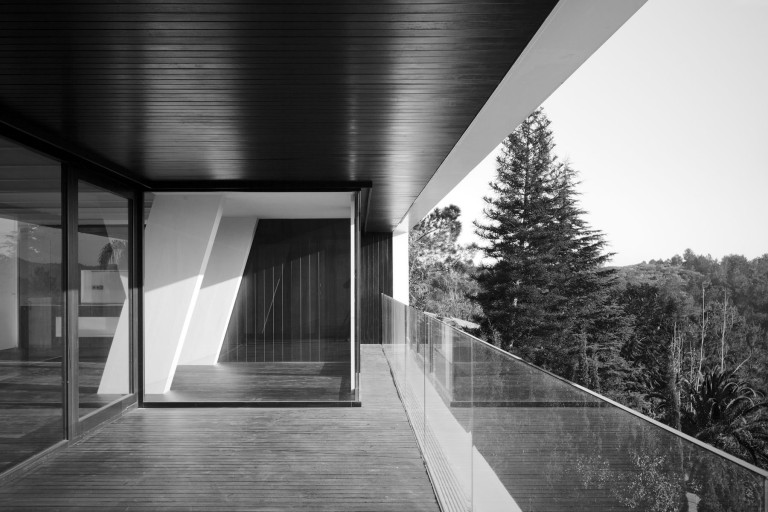 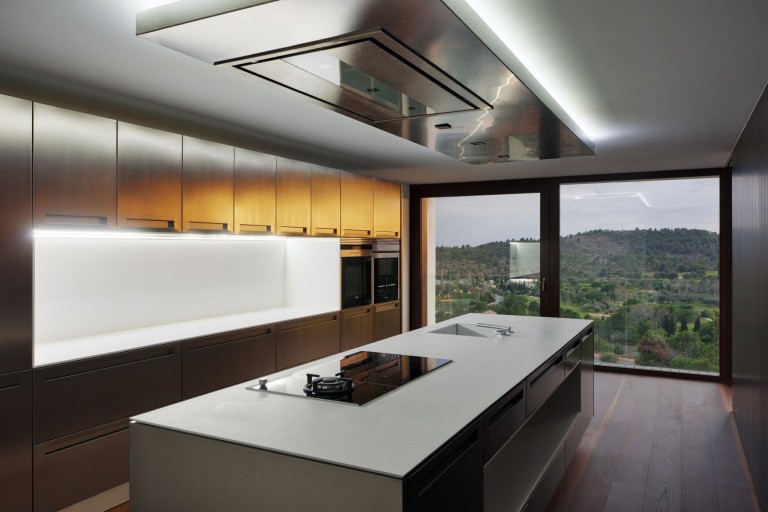 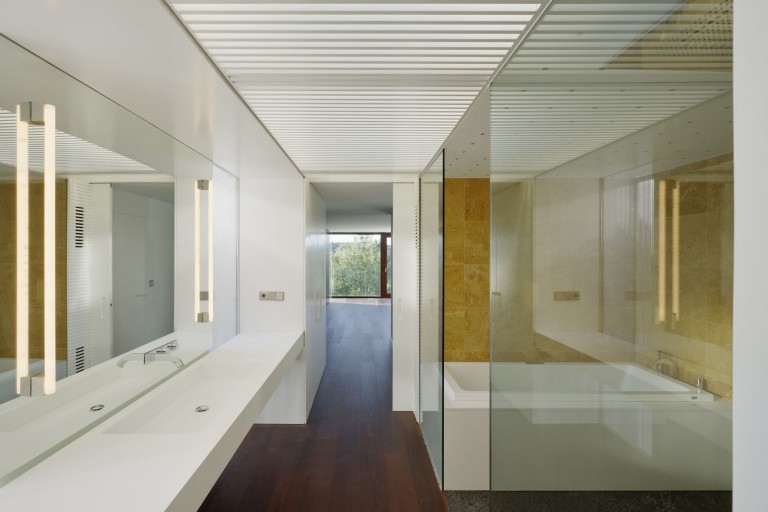 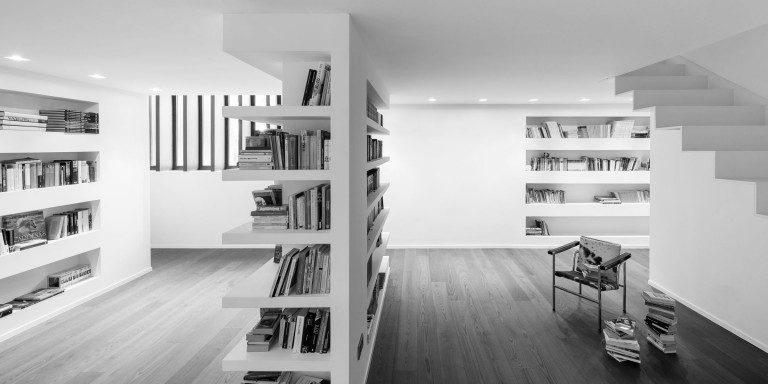 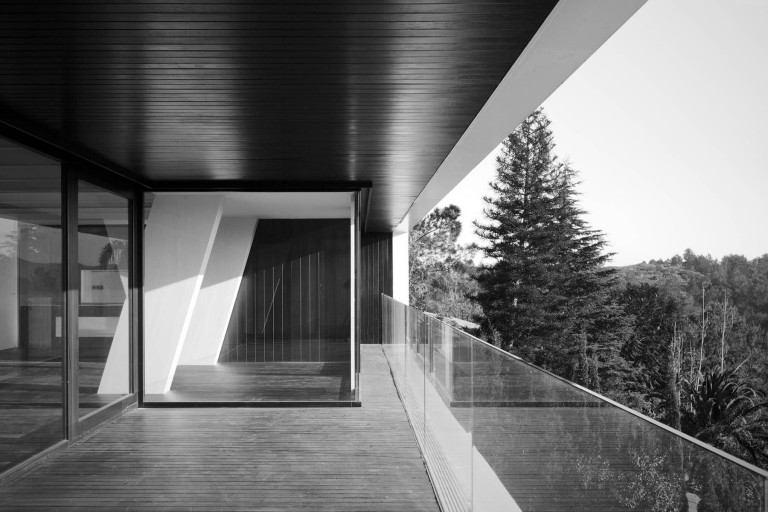 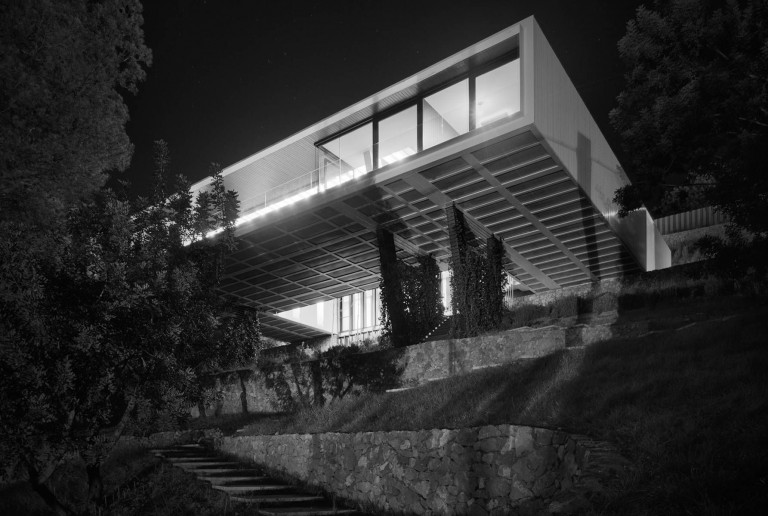 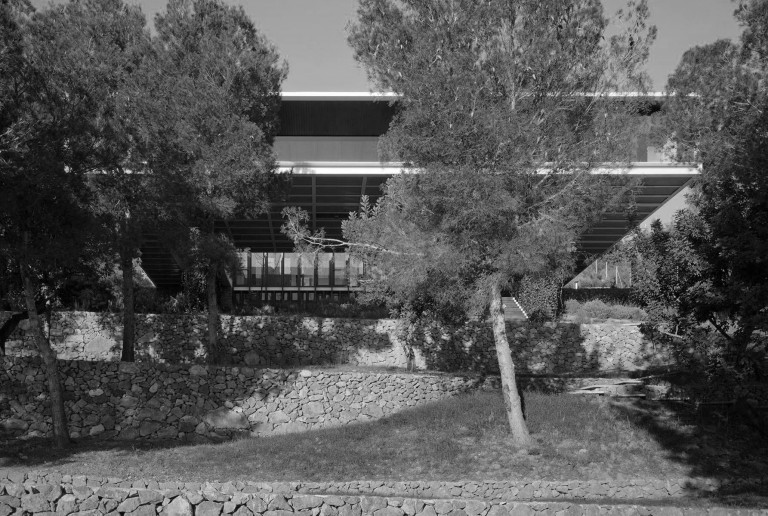 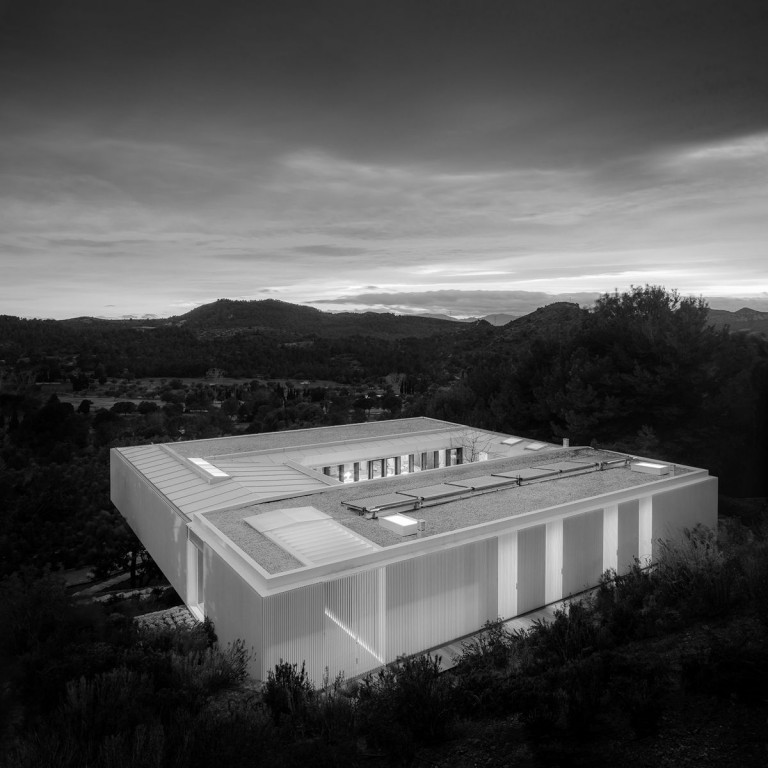 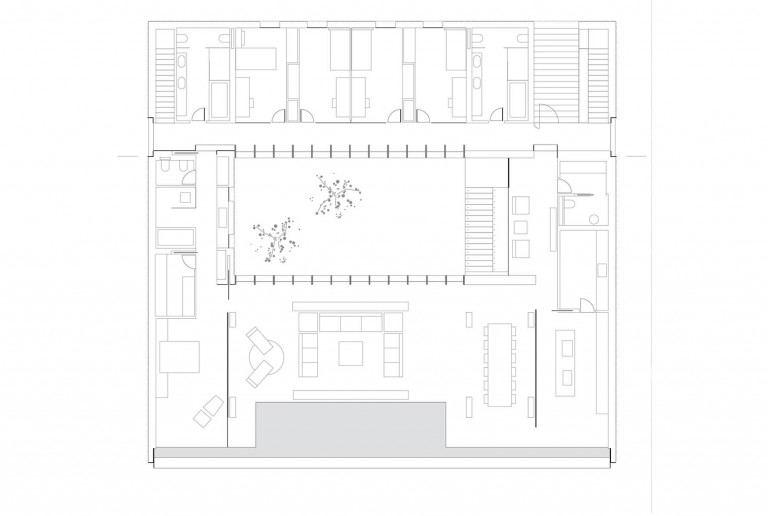 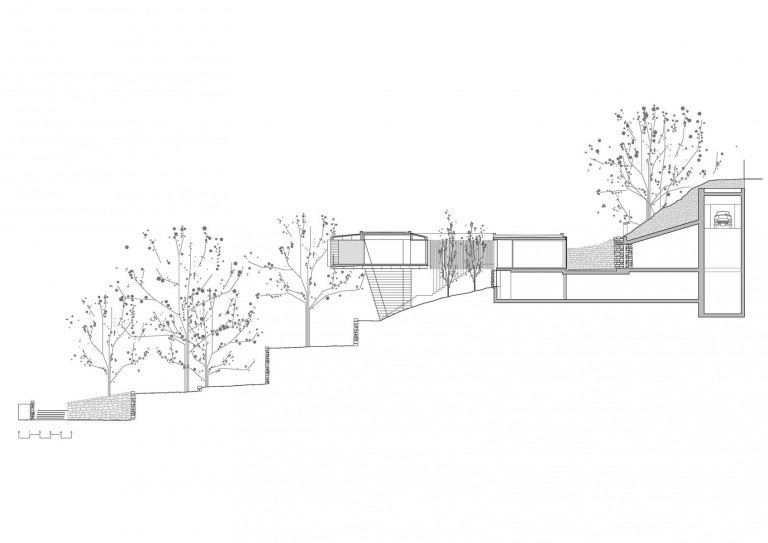 This home is on a plot of 3,000sqm with a height of 25m, in a Castellón neighborhood that is only 50% constructed.  Looking at the plot, we see that it reflects its seventeenth century history, which is when overpopulation forced the cultivation of all types of terrain, including those that are very steep, through a system of small terraces with walls made of local rock. The later abandonment allowed the growth of trees, mainly pine and carob.

Our position towards the plot was that of absolute respect, so the construction method should also respect the land, thus us opting for a prefabricated building system that is deposited on the land practically without touching it, without cutting down trees, and taking advantage of existing terrace/garden areas, which were rebuilt in the damaged areas, with the same stone and same technique.

Part of the house – garage and auxiliary areas – is buried, allowing us to re-introduce native vegetation on the natural terrain.  This also allows the plot to be accessed on the upper level by forklift from a ramp that enters the garage located 13ml under the access level that communicates with both of the home’s levels.  All of this is hidden from view.

For construction, in trying to lessen the impact on the ground, we chose a metal structure fabricated in a workshop and transported to the site in large pieces that could be assembled on 3 metal, V-shaped pillars.  An existing stone terrace supports the back part of the structure.  This home looks as though suspended or in flight due to the dry construction materials used.

The façade, resulting in various layers, is finished on the outside with corrugated sheet metal, specially designed to prevent glare and heat, thanks to the shadows caused by the folds.

The great front opening is oriented towards magnificent views, and allows adequate sunlight in during the winter, but also protects from the sun in the summer.  The solar energy panels with heat pipe technology on the roof allow the home to guarantee that at almost any moment, there will always be hot water available for both domestic use and for under-floor heating. Air currents cross the patio, taking advantage of the different orientations, which permits reductions in air conditioning consumption, which, in any case, has been installed.

The intermediate courtyard allows access under the house, and at the same time, allows all the rooms to face the sun and the views.  The whole house revolves around this courtyard. This is a house with a courtyard, but with different connotations since each room in the house can be seen from the courtyard’s central location, as well as the surrounding landscape, and since the courtyard is surrounded on four sides by the house, but is not enclosed by it due to the slope of the plot.

In the large front area, which houses the kitchen, living room and master bedroom, the construction system is evident since the pillars and roof structure, formed by metal brackets supporting a corrugated sheet over which the roof is built, can be seen.