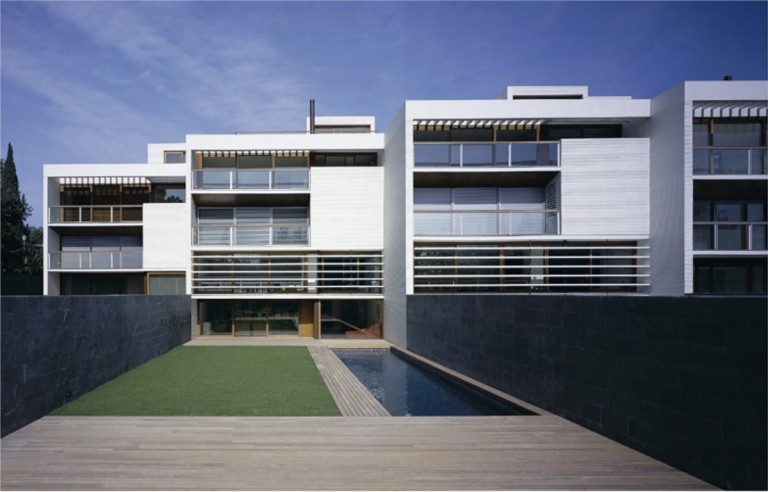 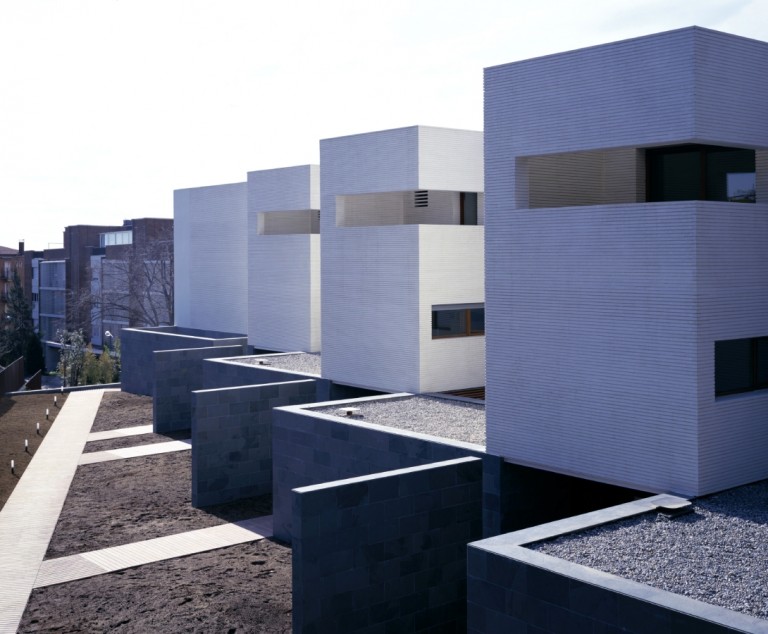 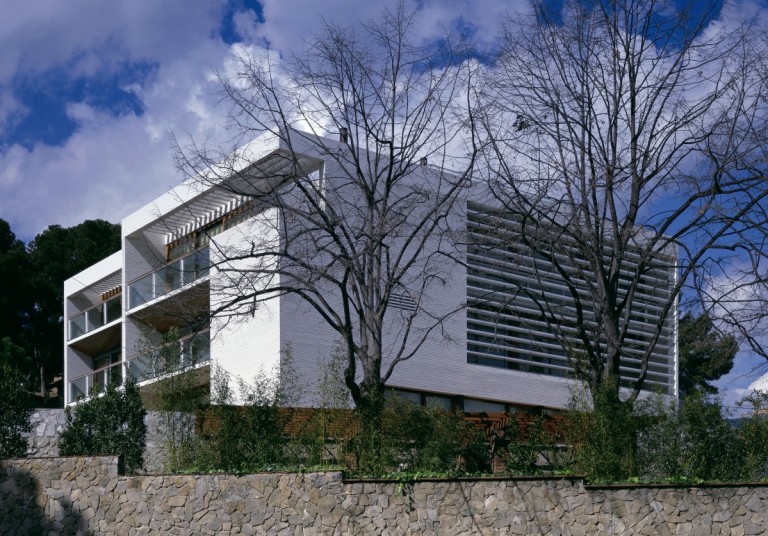 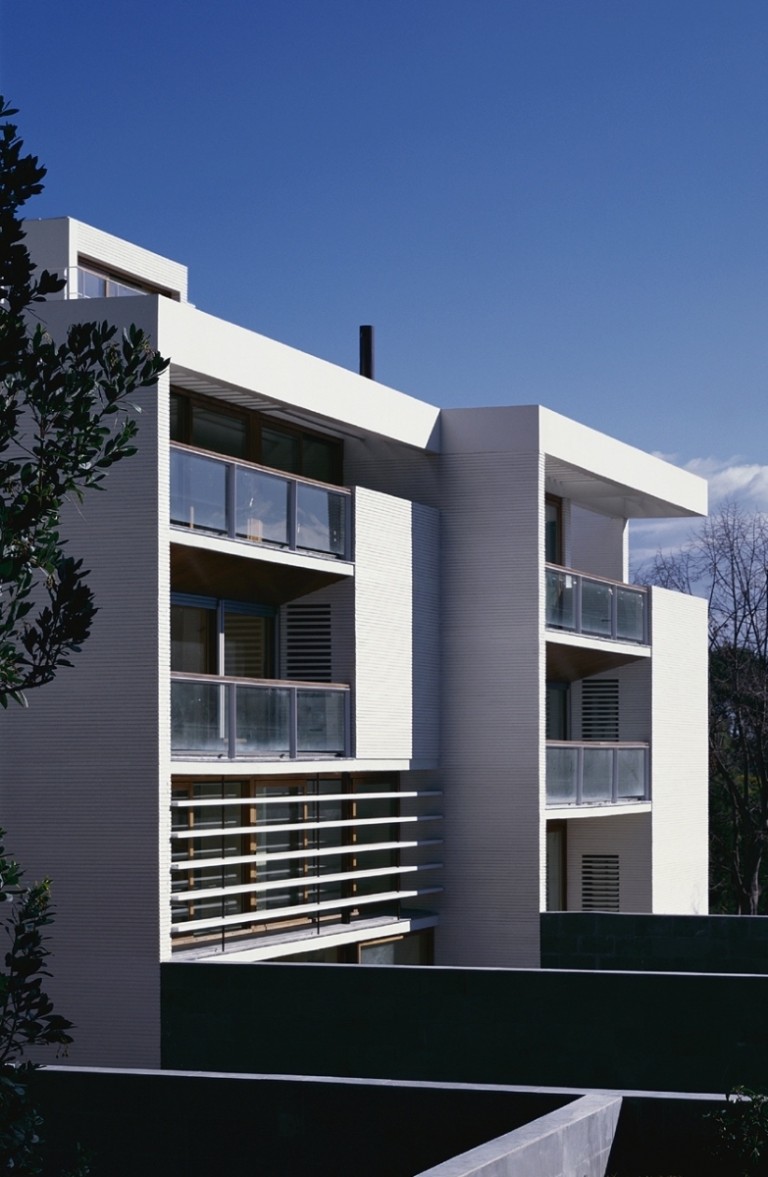 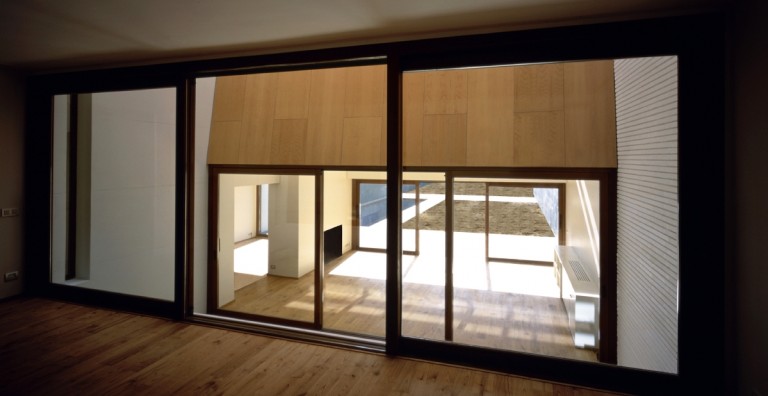 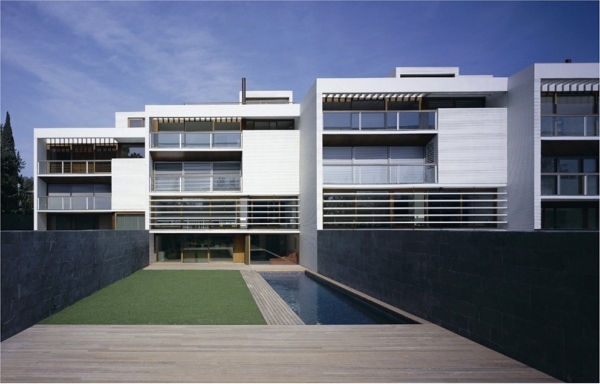 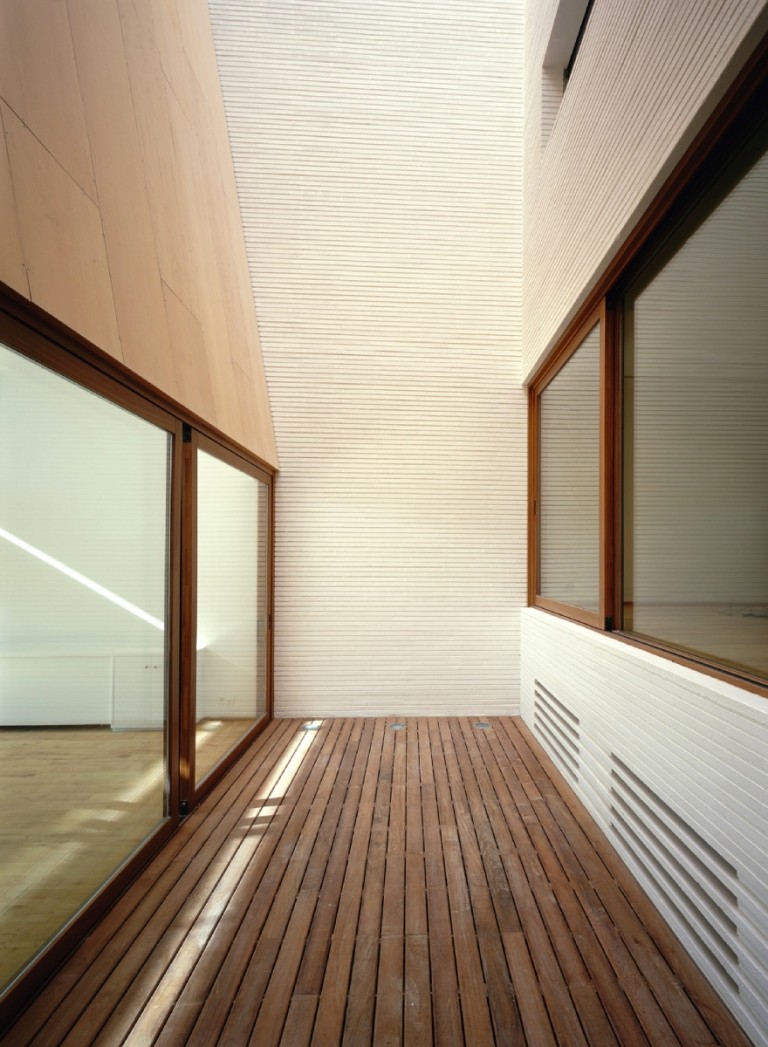 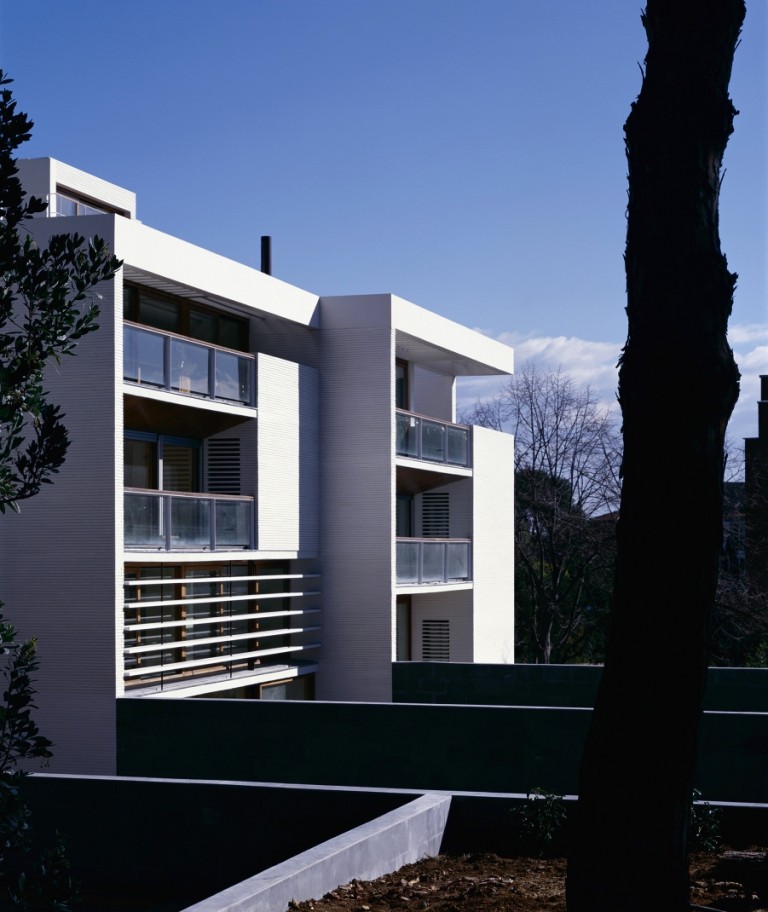 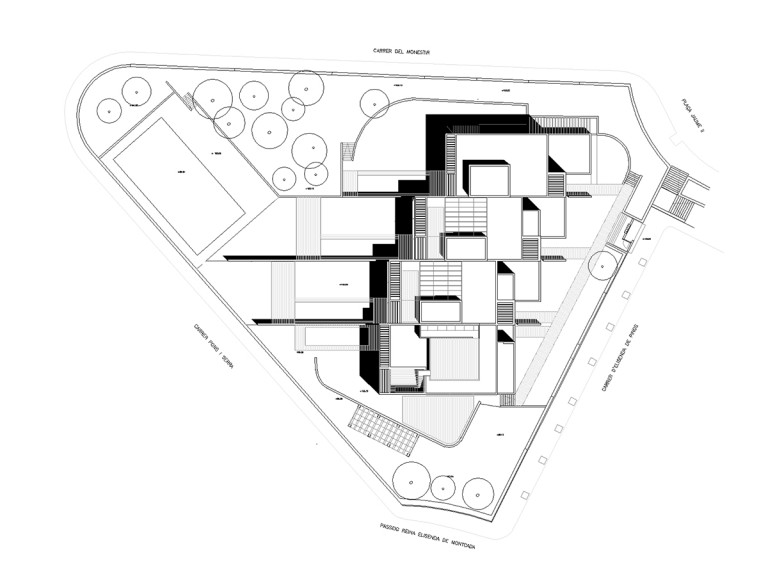 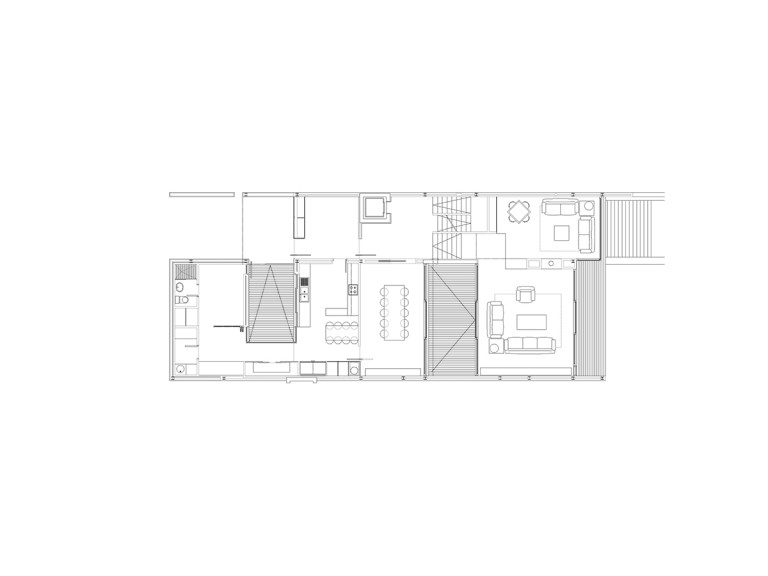 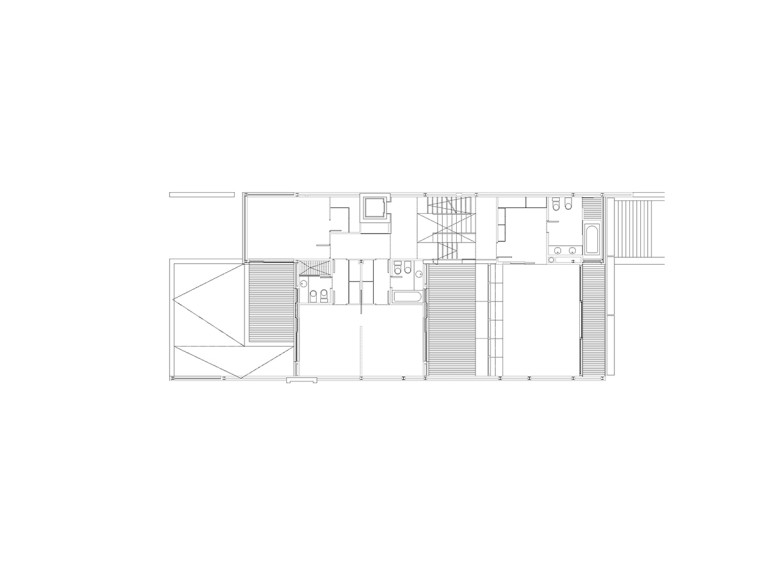 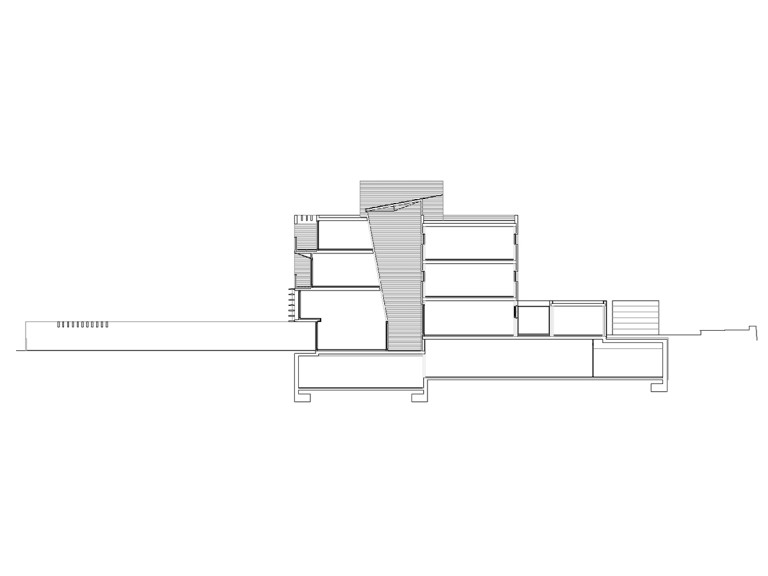 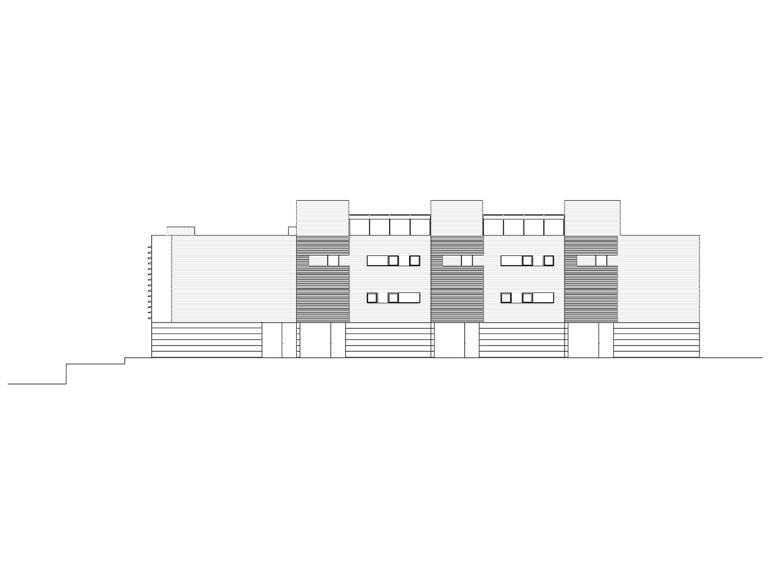 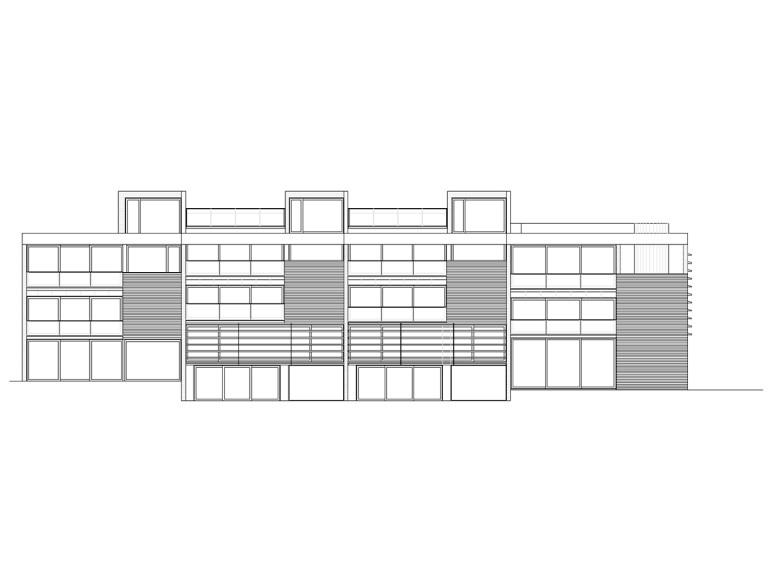 The starting point for this project is the traditional typology of row-houses.

Given a limited number of large-scale residences that lend themselves to a 10-meter span, together with the topographical and landscaping relation with the nearby garden and the urban factor in the upper reaches of Barcelona, the design grows out of working on a single volume, emphasizing the differences between the different orientations. We proceed from structural facades of white concrete and white brick facings on the outer walls, alternating with large empty spaces in which smaller-scale detailing is deployed. In this way we arrive at a unitary volumetry and a topology of the detached, one-family residence.

The complex stands in a residential area of the city, on a triangular plot of land irregularly subdivided into four gardened areas that enter into a rapport with the rest of the communal garden plot.

In the central dwellings a set of patio-style open spaces are stepped in relation to the interior spaces, leading to areas of transparency, of light and dark, that give the houses a better relationship to the outside by converting the intermediary spaces, patios or porches, into auxiliary spaces of the dwellings. In this way we accentuate a certain spatial complexity in a domestic space. A set of interrelated spaces follow one another on the various levels until reaching the roof, conferring on the lateral communications core opening onto one of the patios the role of connecting space.

The cross-section of this funnel-shaped central patio contrasts with the sectioning of the front facade into different planes, and with the small patio which connects the service areas and provides an extra entrance. A tremendous spatial fluidity between these interrelated areas is created in this way.

The double-height in the living room, manifested as a small gallery-cum-library which is related to the garden via a series of horizontal slats, helps emphasize this fluidity.

The north and south facades of the complex are very different, since due to the topography the north facade is closed off to the city, while the south facade opens onto a small wood of lime trees and an existing garden area.

Access to the complex takes place from a heavily sloping rear passageway, permitting a lower level of access to the communal garage, where private parking areas for each dwelling are set out, and pedestrian access on the upper level via a sequence of almost blind volumes covered with white concrete face brick and walls of quartzite, in which are silhouetted a set of small apertures, patio roofs, semi-buried terraces sheltered by pergolas with concrete features.

In contrast to this, the south, garden-facing area presents the greater complexity of the planes of the facade, which are stepped in order to provide more privacy between the various dwellings. Brightly lit and shaded areas alternate on the facade, enhancing a perception of the latter as a stratified, three-dimensional system.