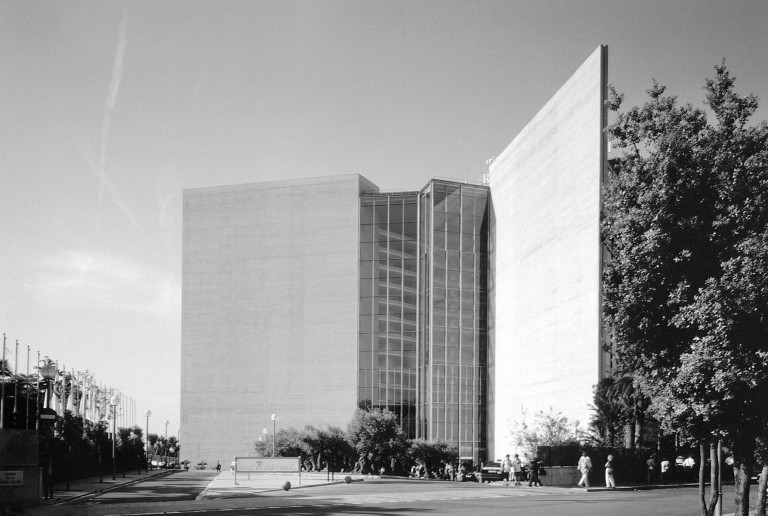 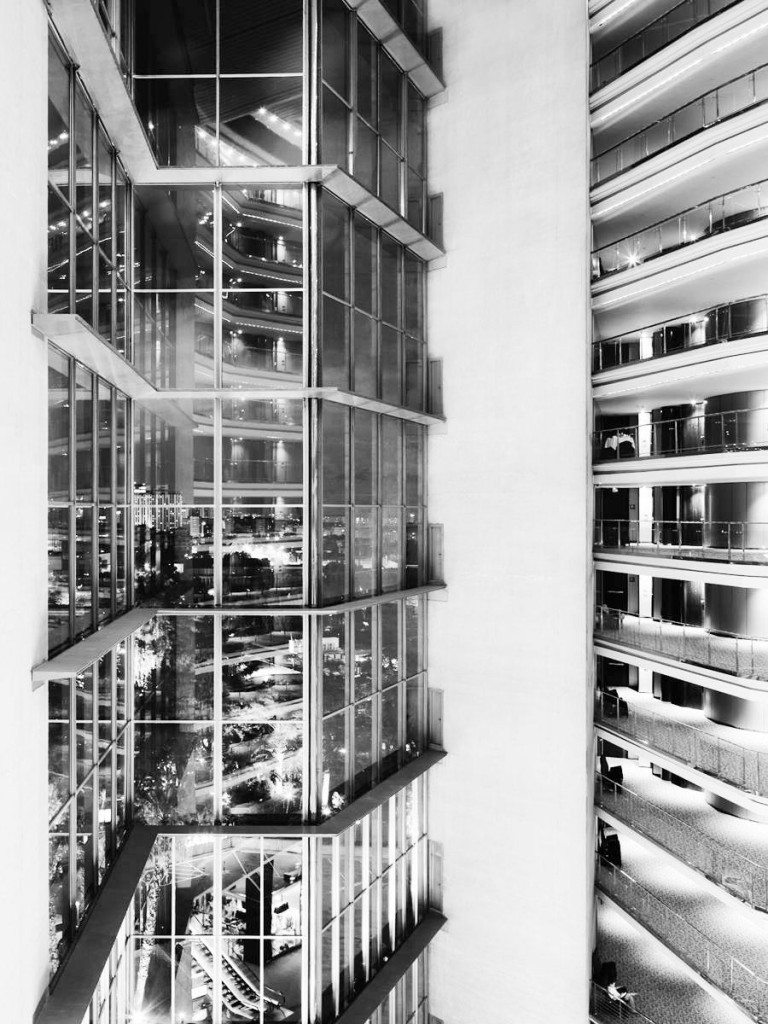 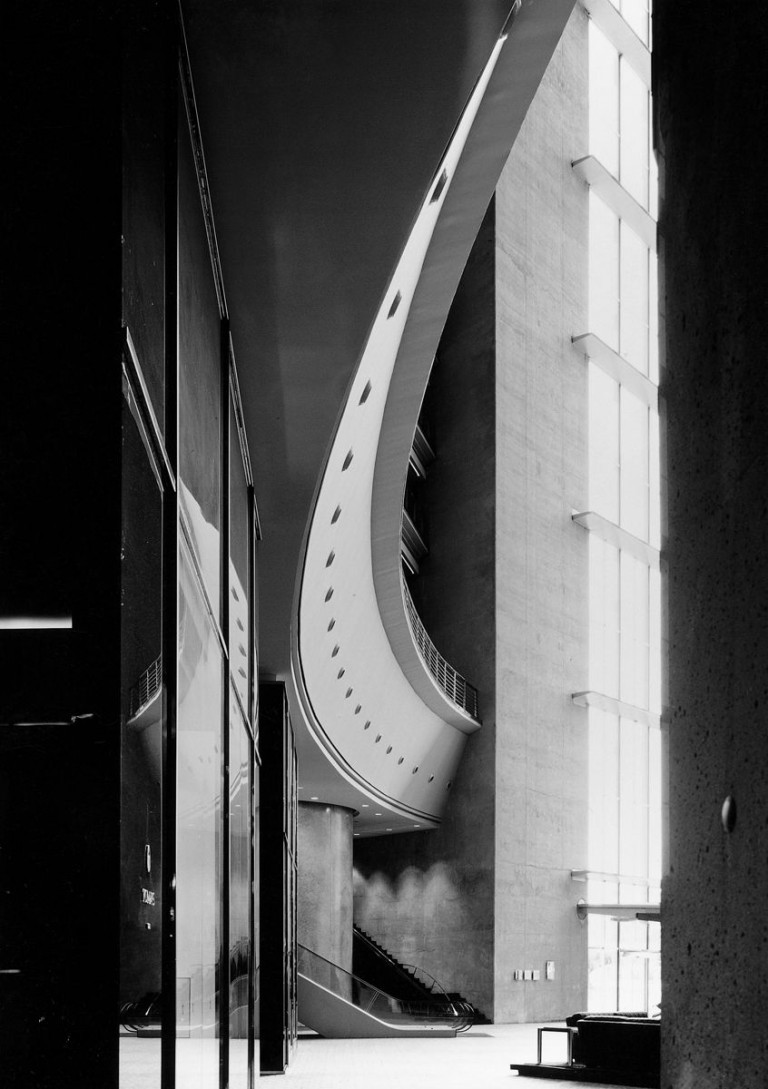 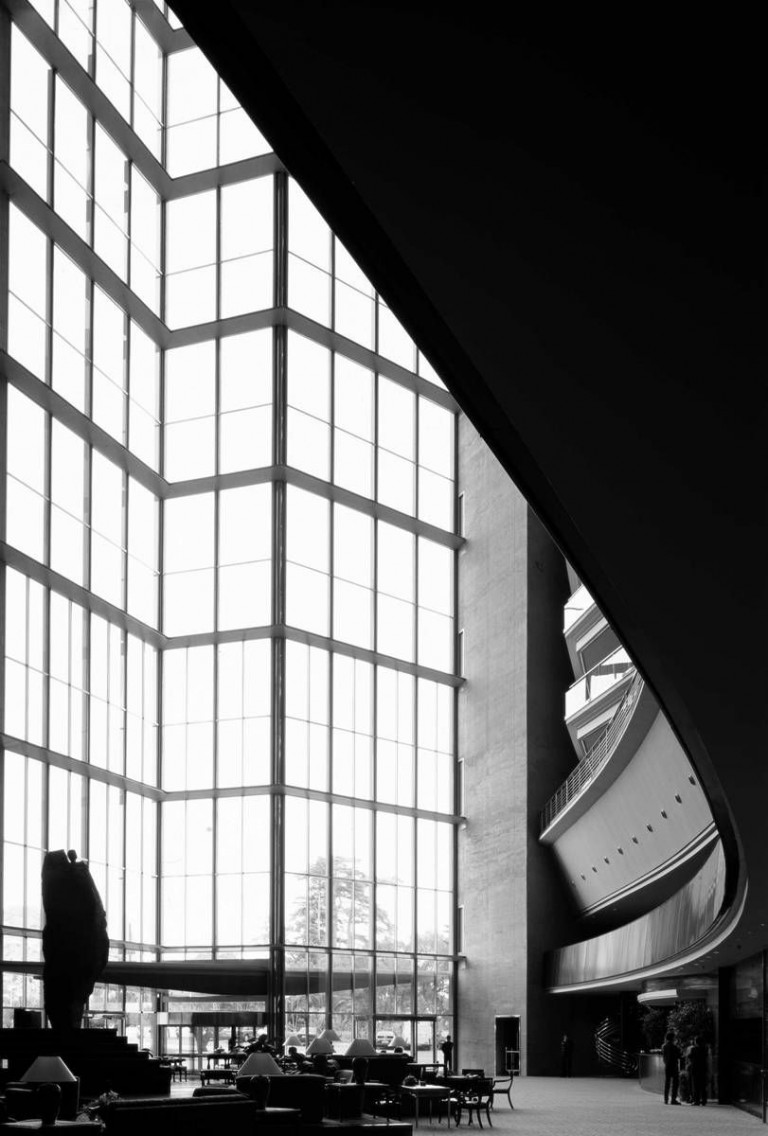 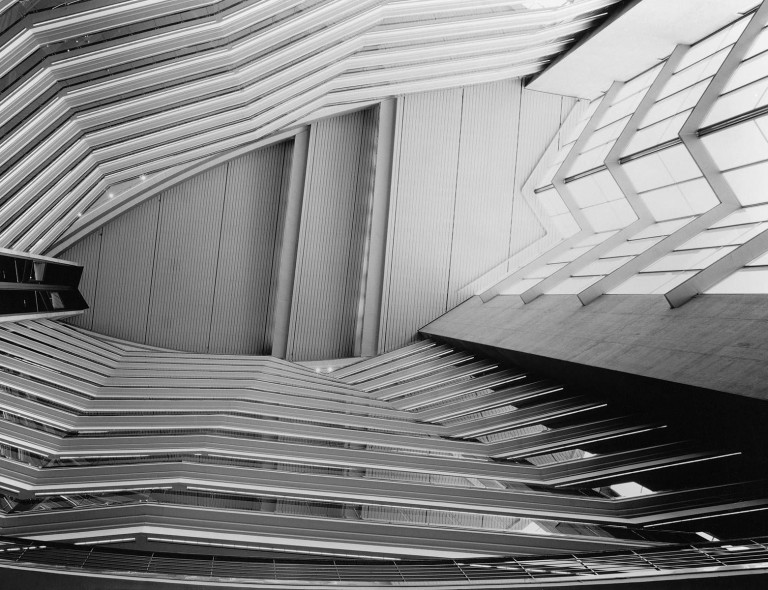 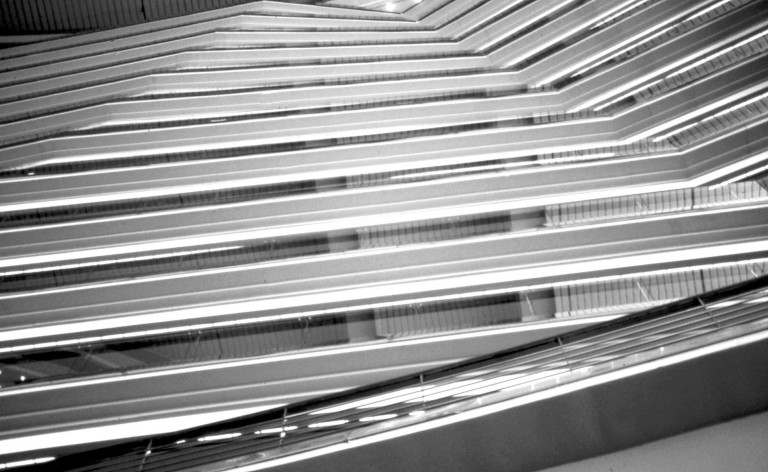 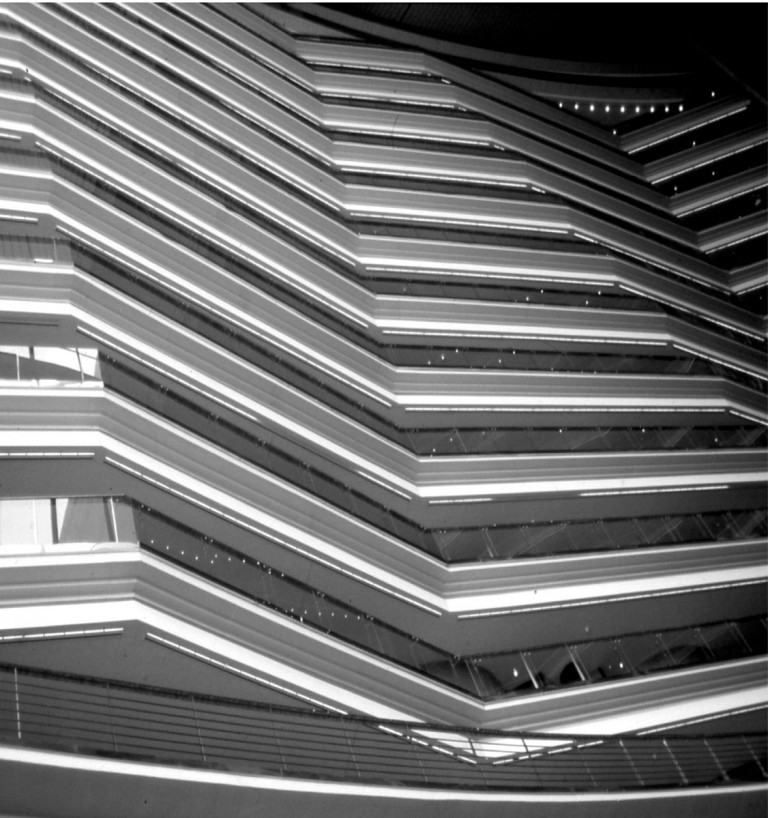 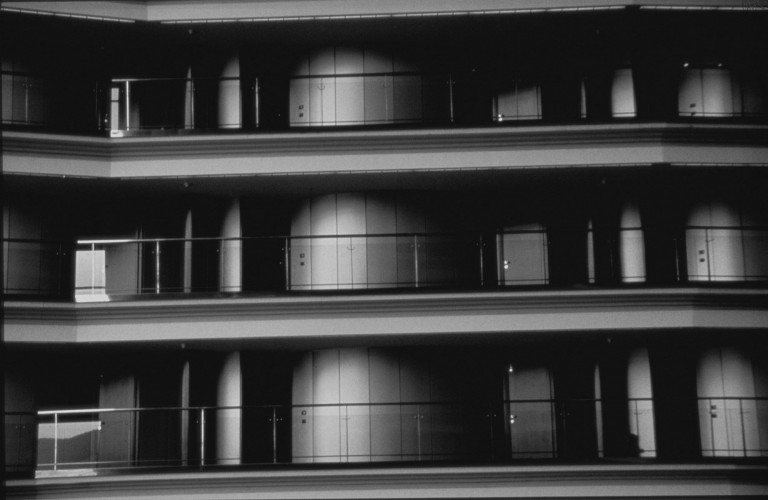 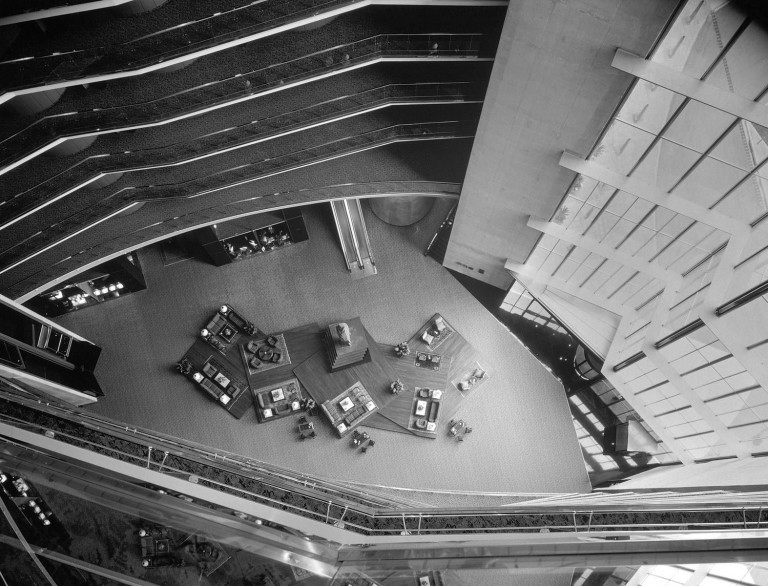 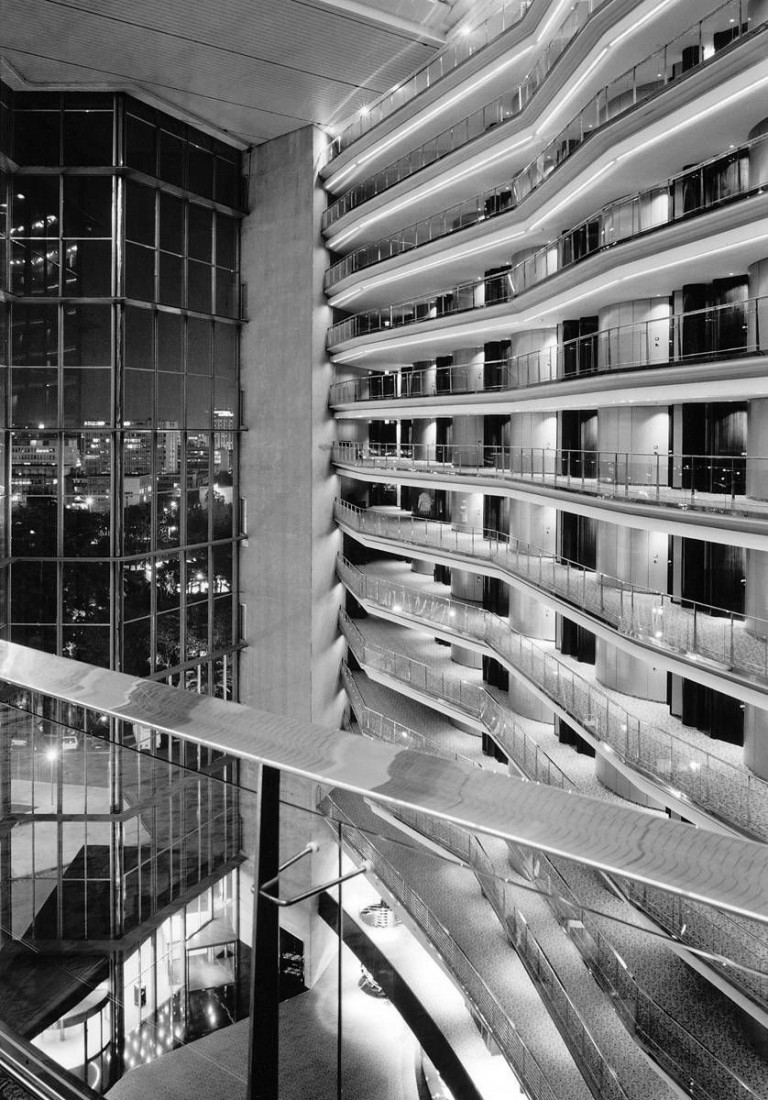 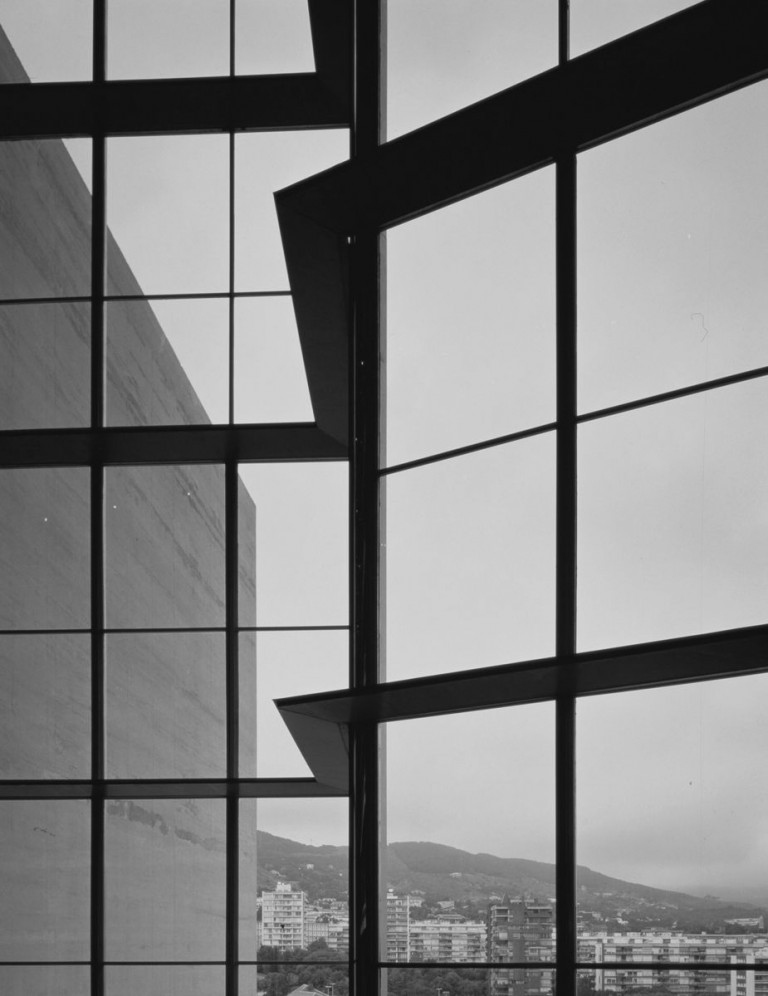 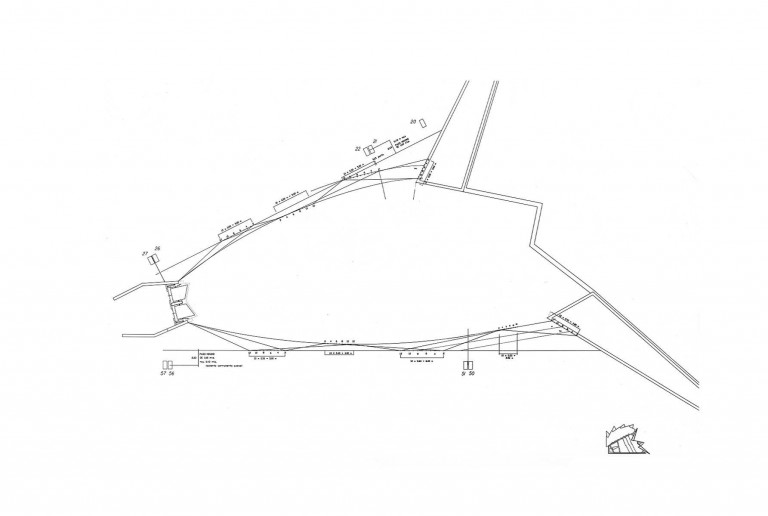 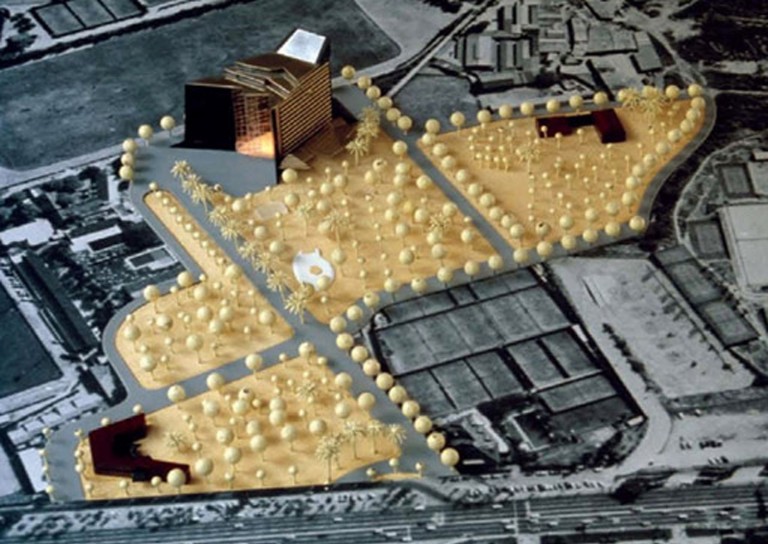 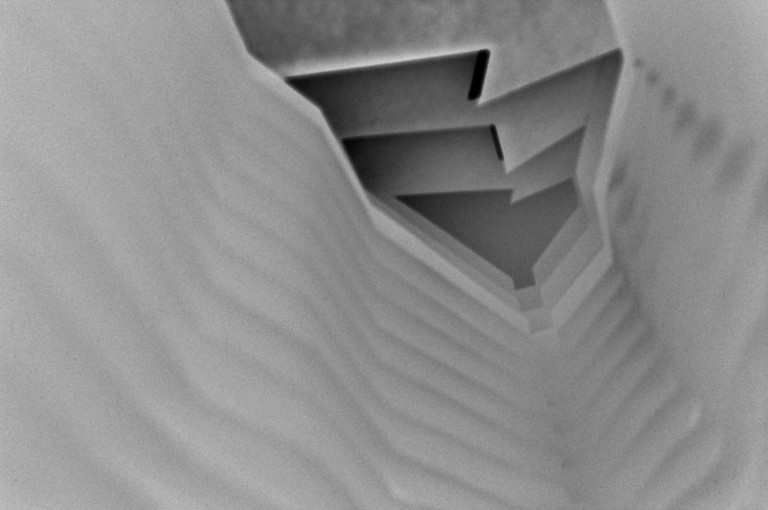 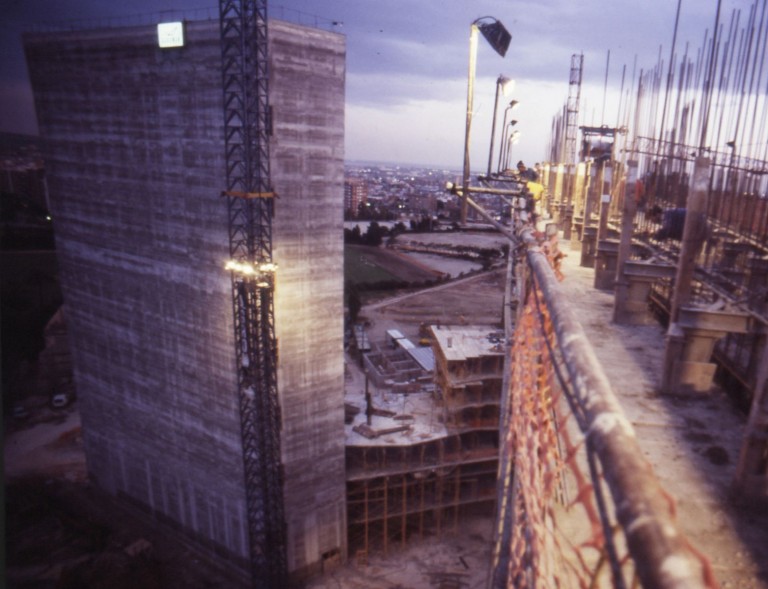 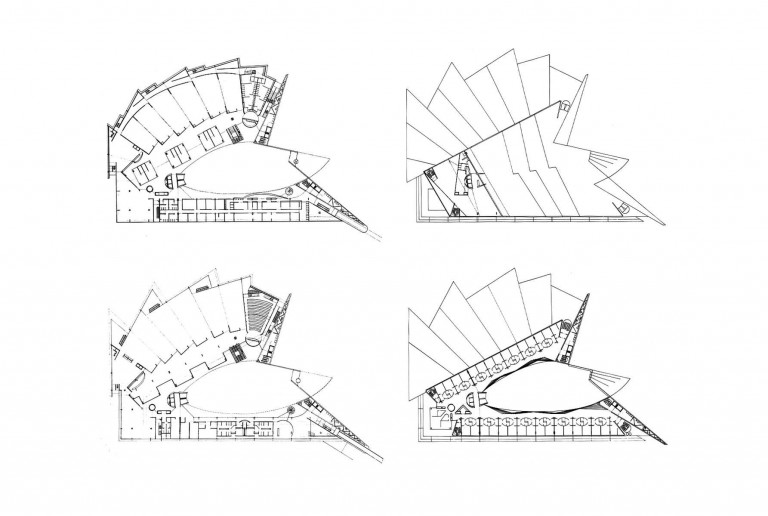 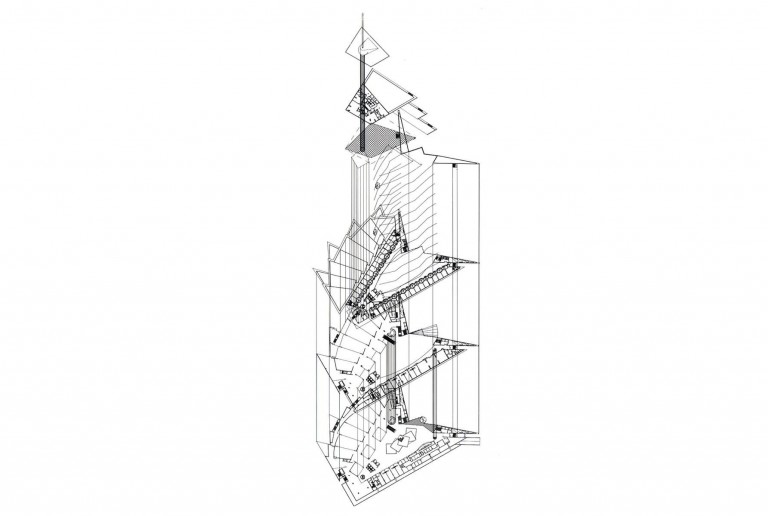 The construction of the interior space results from a nexus of design and building operations: the first of these consists in sliding the formwork of the bedroom floors into a set of polygonals which angle and regulate the different surfaces  making up the first interior façade. As well as lending the resulting space a certain dynamism, this set of changing planes helps to control the acoustics of the huge lobby.

This first enclosure is made of concrete cornices and balustrades in two planes, one of glass and the other of cast aluminum elements which, while maintaining their diaphanous and crystalline quality, help resolve problems of vertigo, cleaning, maintenance and the changing of their individual components. Two continuous channels, one of lighting and the other for the injecting of air to pressurize the corridors, complete this first membrane.

This façade is complemented by the interior one enclosing the bedrooms (each of these is a fire-protection sector) formed by the elliptical surfaces that close off the bathrooms, covered in curved sheets of Alucobond, and the cylindrical pillars lined in crotch mahogany that is uniform in section from top to bottom, which accommodate the entrances to the bedrooms.

Between these two surfaces the corridors gradually vary in section, thus privatizing and obviating the sightlines from the lower lobby. The entrances are independent of each other while also providing views of the city and the mountains through the huge north-facing glass wall.

The second design operation that was effected in order to see the construction of this interior space has to do with its section. The space is structured vertically in three parts: the lower one, 10 m high, is terminated by a series of inclined curved surfaces which correspond to the outer wall of one of the technical floors, and which due to its slightly arched condition reinforces the personality of this first level, a level that also has differentiated air conditioning.

In turn this first level is structured on three floors; the lower one, corresponding t the lobby, accommodates reception, janitor service, services like travel agencies, car hire, banks and other user-friendly services; to the rear of it are located the offices and the  control and management facilities of the hotel. At the other end of the lobby there is the commercial area consisting of three great parallelepipeds of glass, while behind these there are the exhibition galleries, bars, cafeterias, restaurants, cinema and lounges for different uses.

On the mezzanine piazza are sited the business center, the fitness center and a third restaurant, and on the opposite side all the multi-use rooms, which have a direct entrance from the gardens, situated at a higher level than that of the vehicle setdown point. All these rooms, which fan out beyond the projection of the structure of the upper floors can be united to form a huge, diaphanous assembly room for more than 1,200 people. The communication between these two levels is effected via staircases, groups of lifts and escalators.

On these two floors, and finalizing this first level, there is a technical plant that extends horizontally.

A second level, occupying another visual plane, is made up of twelve floors of bedrooms which configure the central part of the 42 m high space by means of a set of polygonals, forming the gigantic rib described above.

Finally, the two top, crown-like floors are set back, allowing for the entrance of light and for the smoke outlet which, in the event of a fire, would turn this vast space into a courtyard open to the sky.

With their curved lines and the opacity of their parapets, these final floors, which house the executive suites, constitute the top crown of the space described.

Situated above all this is another technical floor, the mission of which will be to keep the roofs of the building free from installations and machinery. The royal suite and a small communications center are situated on it.

At the other end, beneath the large lobby, on a 9 m high floor which reproduces the shape of the space above, is the main hot-water tank for the bathrooms and the air-conditioning water tank.

As for illumination, this is assured by means of a north-facing glass partition, strengthened by two brackets, which absorbs the stresses of the wind by means of horizontal ribs. A set of mixed metal profiles construct the different nodes, which in their pleats house the structural carpentry supporting the glass panes. A cantilever projects, counter-balancing the glass partition and accommodating the main entrance and the vehicle setdown point.

This glass wall and the openings between the roofs provide the lobby with north light, rendering artificial light redundant during the daytime. This means that the perception of space spatial perception is the opposite by day of what it is by night.

During the day the space invites the outside in, accentuating the natural light, the different facets, arrises and planes.

By night the process is the exact opposite, the space closes in on itself. The artificial light points up and follows the lines of the building, and the glazing, which partly reflects the interior, allows the emblematic city lights to be seen through it: the communications towers, Tibidabo, the Diagonal and its representative buildings.

Flanking the glass wall are two huge concrete walls, realized in sliding formwork, which within them contain all the vertical installations, and serve as connections and circuit closures on each floor. These walls house the air-conditioning, air-extraction and air-renovation installations for the bathrooms, gas-evacuation outlets, all the chimney flues, service elevators, baggage lifts and laundry chutes, as well as the utility rooms for each floor, the emergency stairs and the security installations.

It is these walls, in fact, that make possible the interrelation between the users all the service networks without intersections.

These walls form the outside of the main entrance façade, thus obviating a view of the bedroom windows and creating an emphatic change of scale that helps situate the building on the terrain.