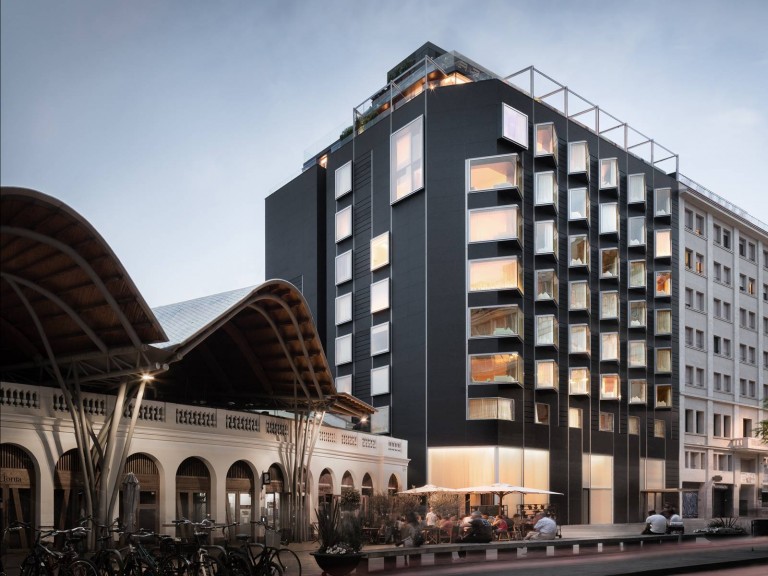 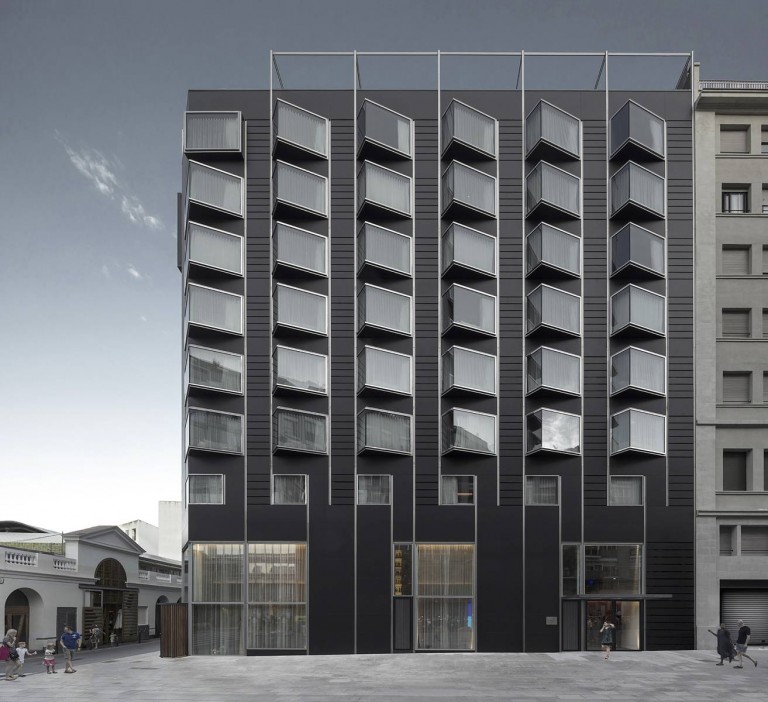 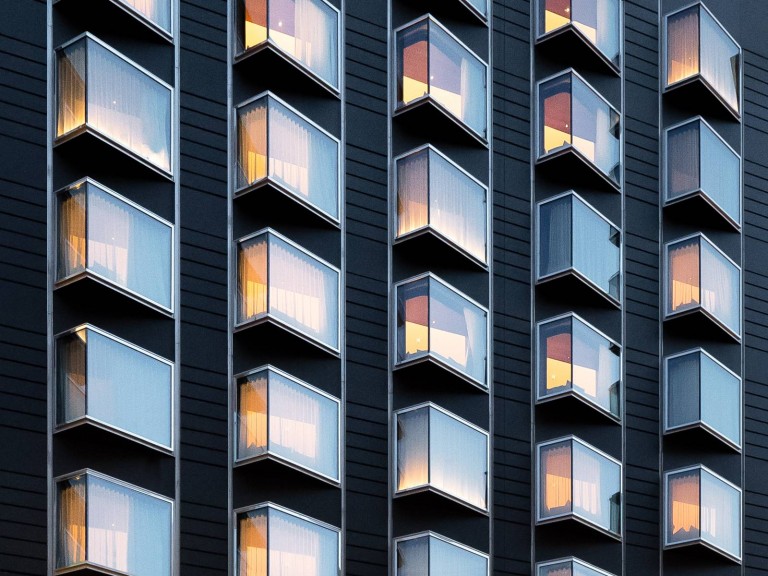 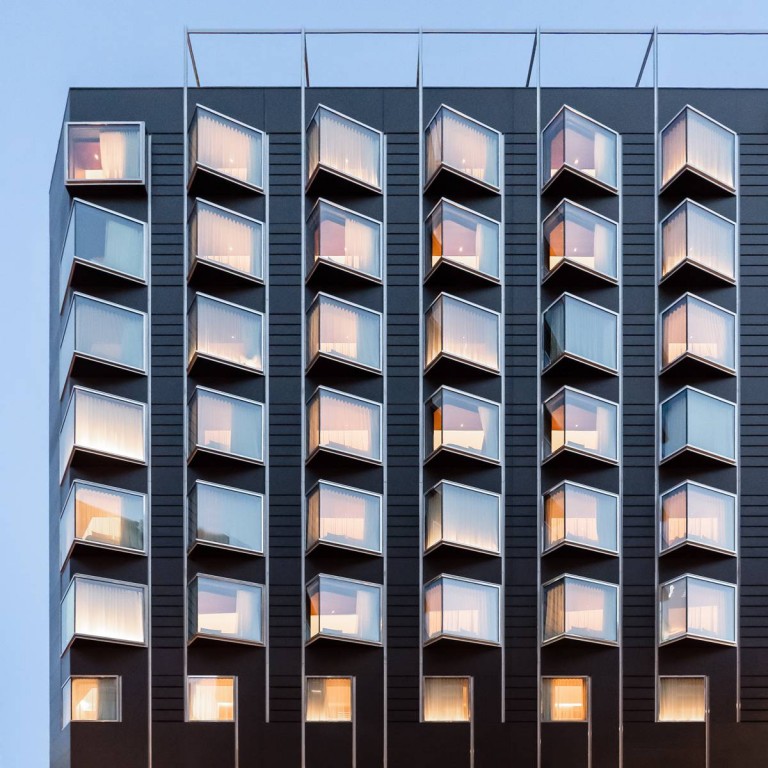 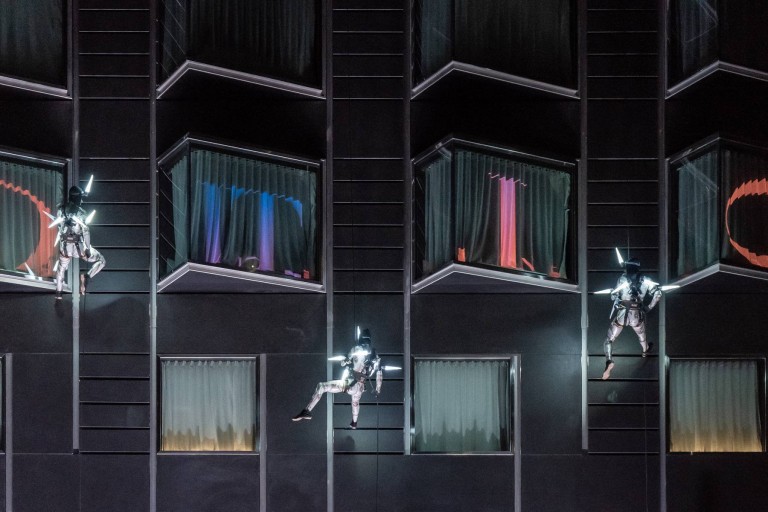 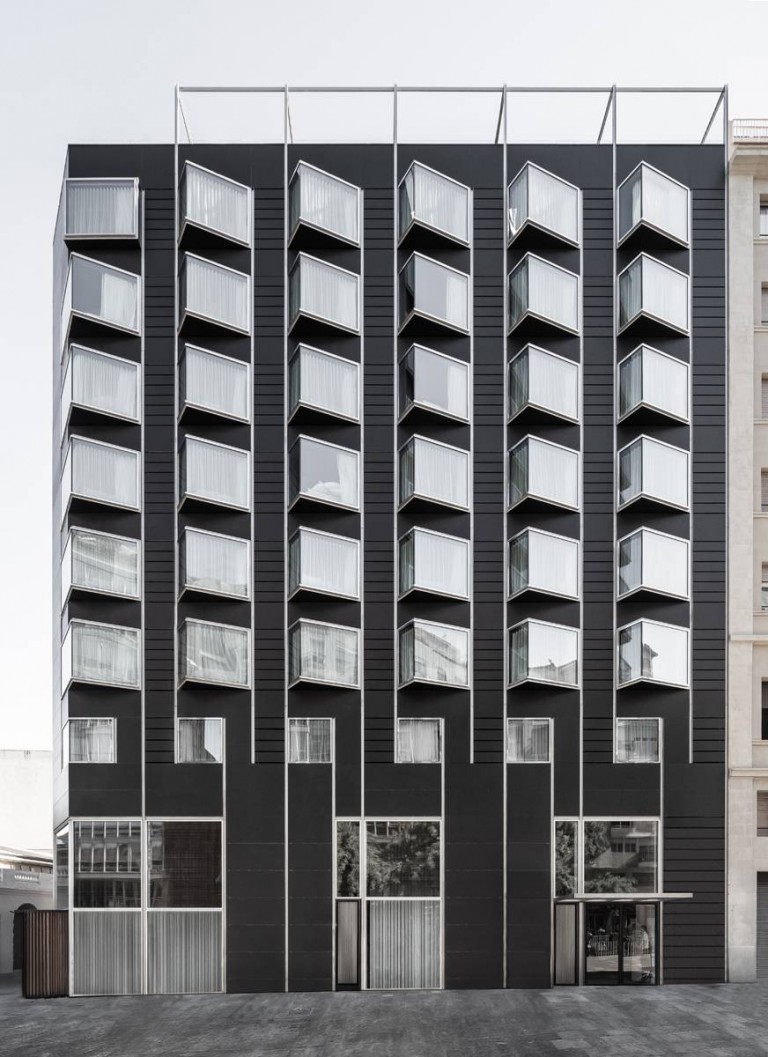 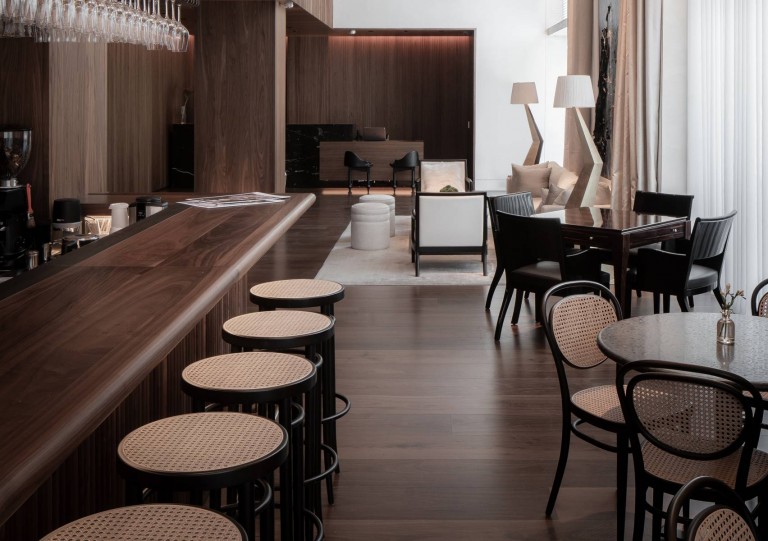 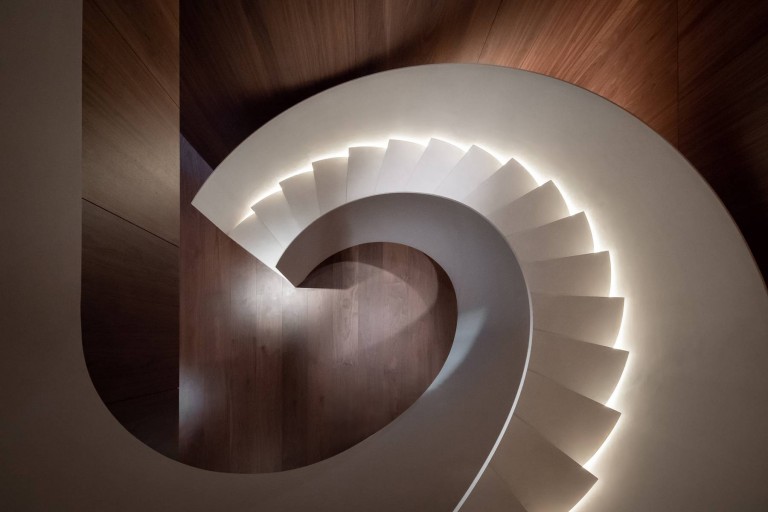 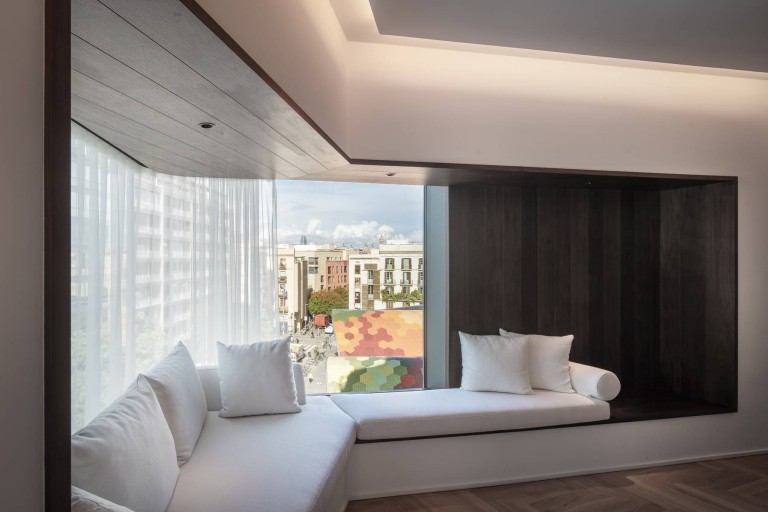 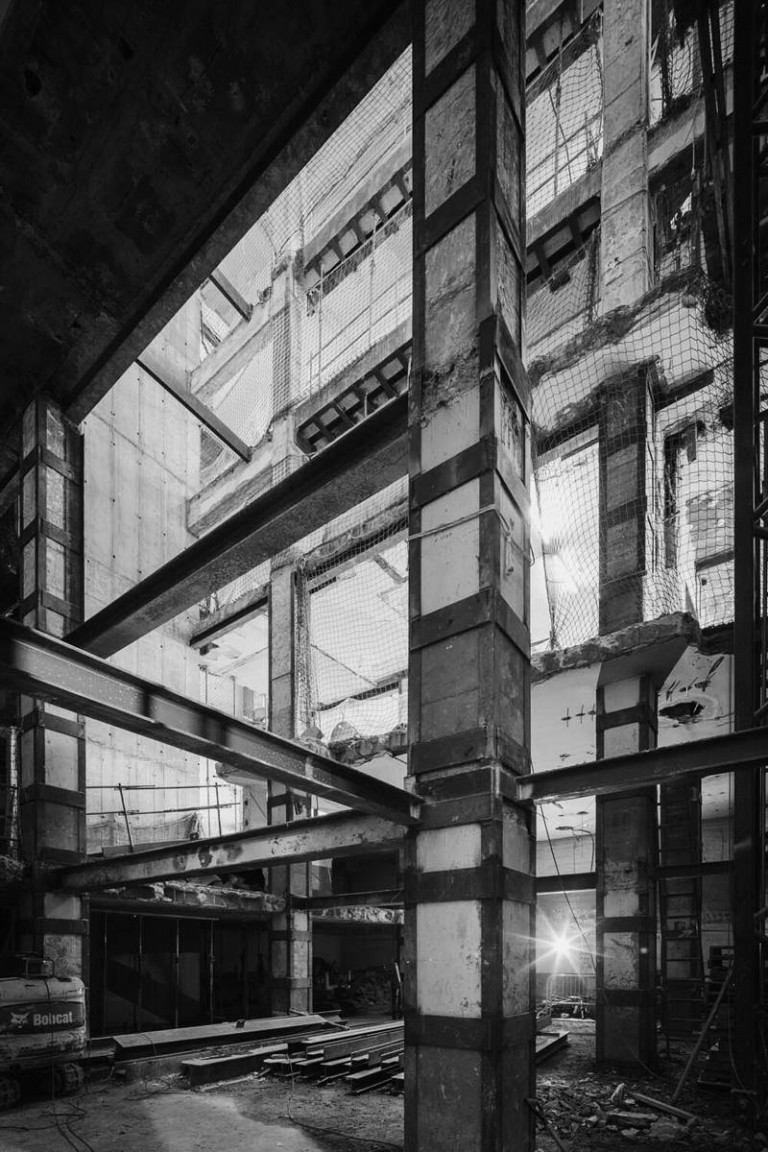 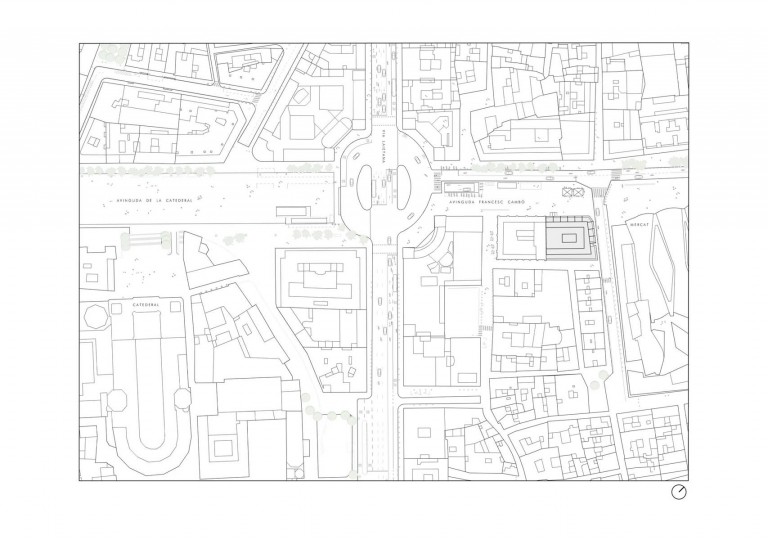 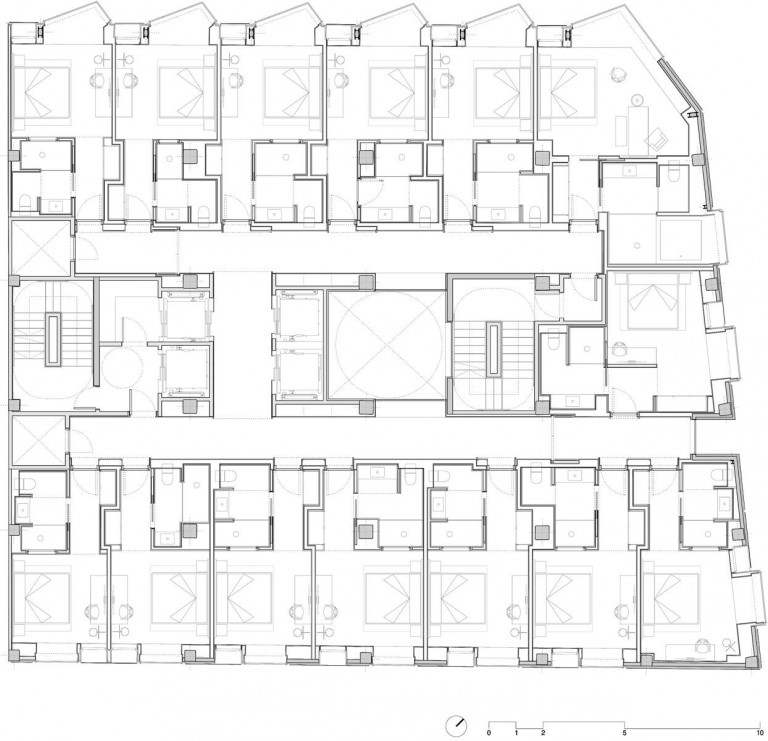 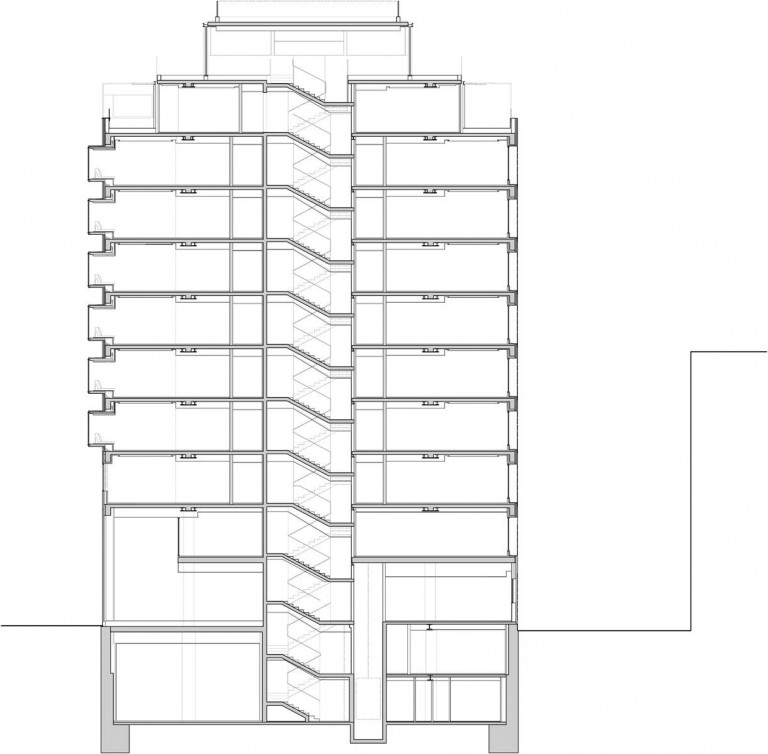 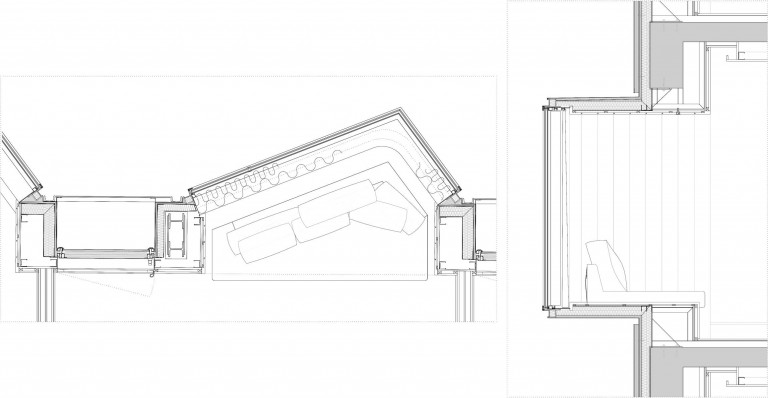 Situated opposite the old medieval market squarein the Santa Caterina neighborhood, the project consolidates the urban transformation of Ciutat Vella, which has led to the modernization of the historic center of Barcelona begun in the 1980s, while meeting the requirements of the operator of the new Barcelona Edition hotel, Ian Schrager, creator in the 1970s of New York’s iconic Studio 54. The renovation of the market and the scheme for public space on Avenida Francesc Cambó has been conducive to the neighborhood’s social and economic revitalization. The new project posits a change of use for the existing office building, along with complete rehabilitation of the spaces within, by building a new skin that results from the tension between the new typology and the urban spaces surrounding the building. The design for the hotel responds to this dual nature. On the one hand the ground floor with its double-height openings provides continuity with, and complements, the commercial activity of the market. On the other, the volumetry and the outer skin are modulated in a different way, as per the singularities of the urban fabric and their immediate public space. The articulation of the hotel’s three façades is produced via the construction and deconstruction of its corners, while the sectioning of the end wall confers a kindlier proportion on the resulting volumes. Between Calle Freixures and Calle Avellà the arris is easily identifiable and the façades make their incursion into the urban fabric of Ciutat Vellaby maintaining the proportion and morphology of their openings, which are typical of a more collective urban space. Between Avenida Francesc Cambó and Calle Freixures, however, the singularity of the building is recognized through the elimination of the corner of the preexisting building and the creation of a chamfer. In this way the building interacts with the piazza and acquires its public image, at the same time as it recognizes the presence of the market from the entrance to Calle Freixures. The bow windows in the form of diamond points correspond to the sitting areas of the bedrooms on Francesc Cambó, which are directed alongtheextended sightlines in the piazza towards the Cathedral, thus preparing the geometric conditions for the construction of the chamfer. The construction of a plinth on three levels maintains the formal structure of the neighboring building (ground floor, mezzanine and first floor) with a contemporary language, making for a lightweight façade with a cantilever at its crown. The black ceramic skin with large-format panels constructs the vented, sustainable (Leed Gold) façade with open joints that accentuate a segmentation which calibrates the different apertures on each façade. The typological resolution of the bedrooms floor is arrived at through the hollowing out of the existing central bay for the situating of the patios, stairs, services and elevators, freeing up the two side bays for the placement of the bedrooms. A huge oculus in the suites of floor 8 and 9 looks out over the roofing of the market, in a search, once again, foran interrelationship with the neighboring public space, thus recognizing the aptitude of the collective architectural project when it comes to constructing the city.