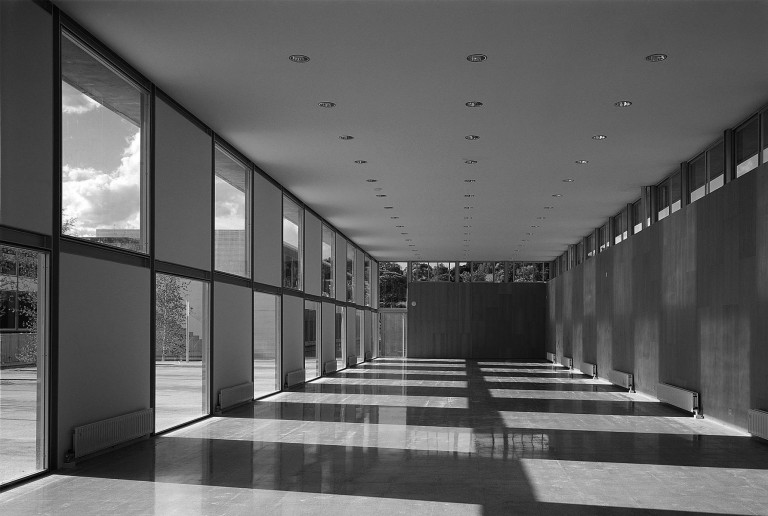 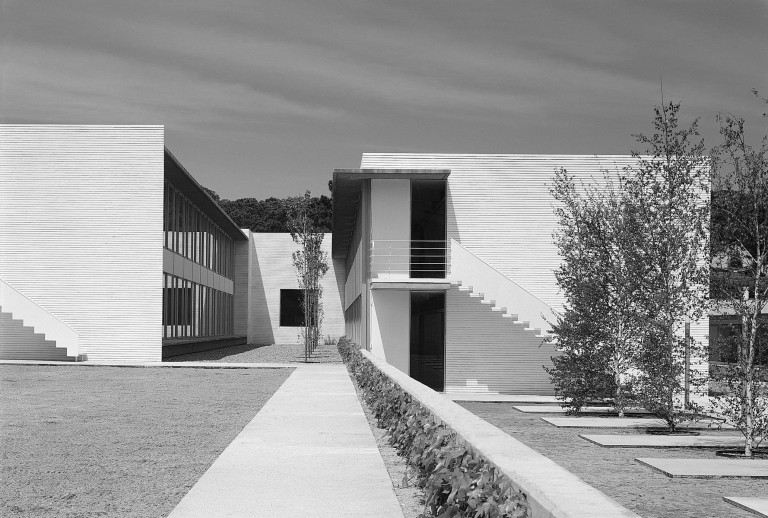 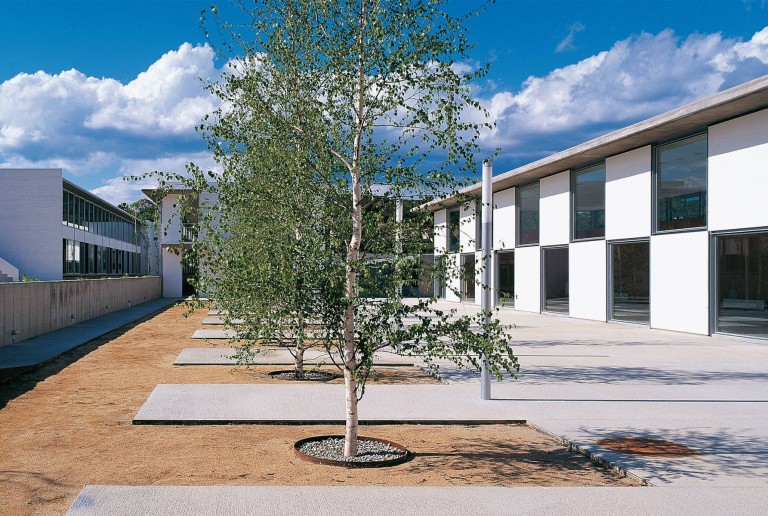 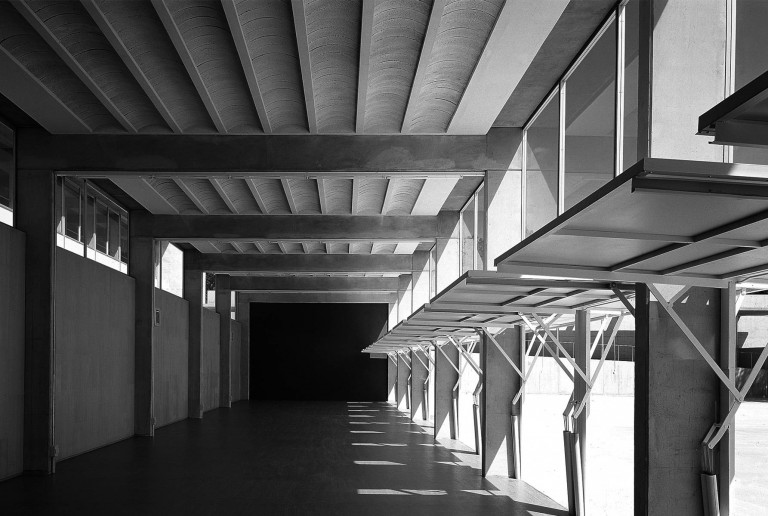 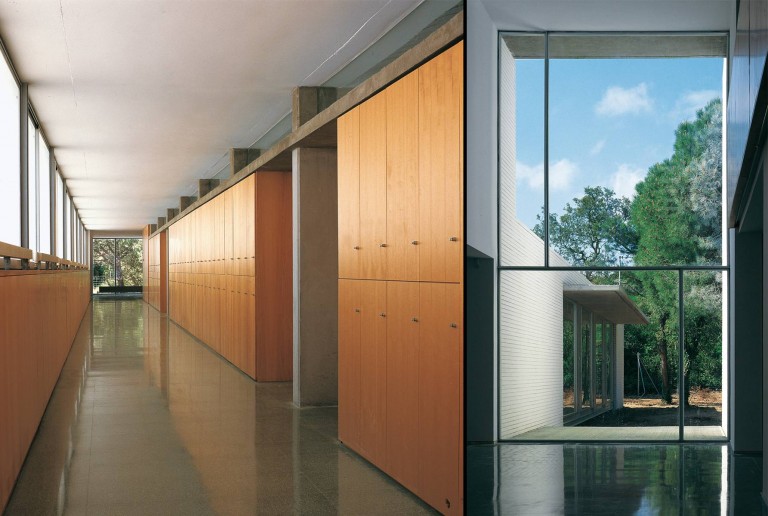 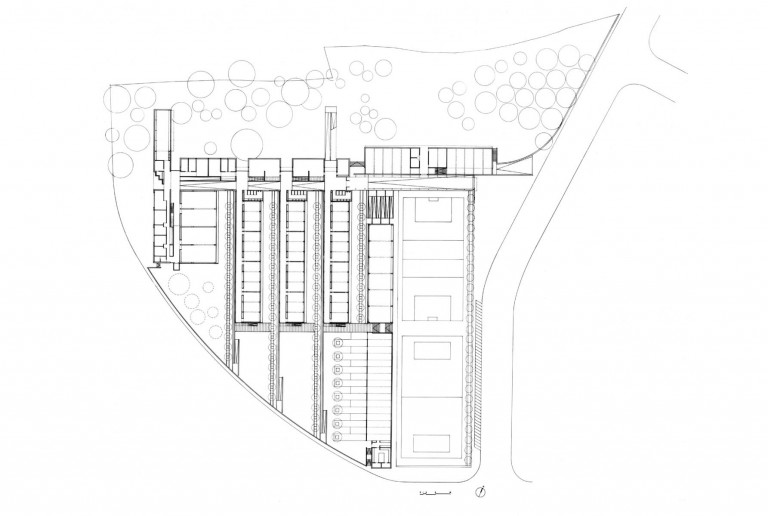 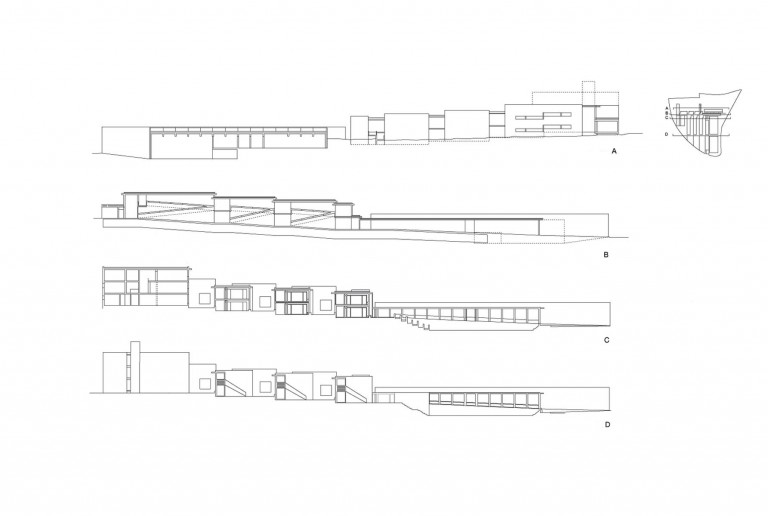 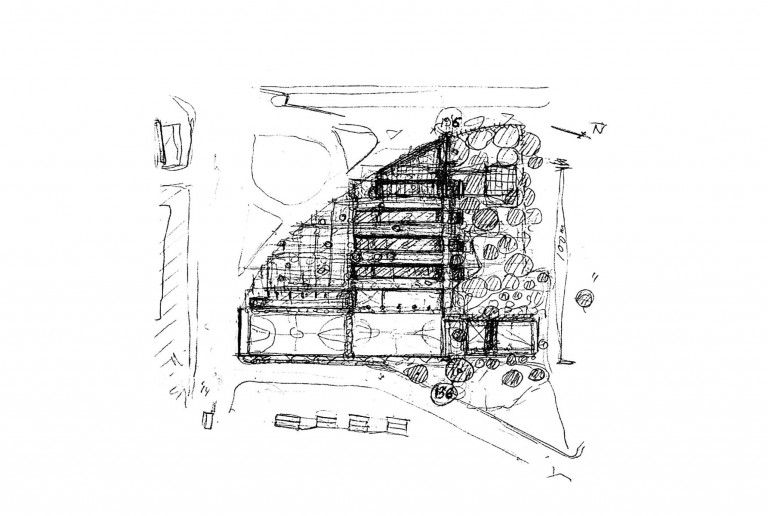 The project consisted in the design of a prototype school for intermediate professional education for the Generalitat de Catalunya.

From our first meetings with our counterparts at the Architecture department of the Generalitat we understood that this ambitious program would be reinforced if we could find a site which allowed the creation of outdoor spaces as well as intermediate spaces in close contact with the different areas of the complex, as in a small campus.

The local Council of Lloret de Mar found some land close to the town access, a gentle topography sloping eastwards in a forest of pines and oaks.

The project vertebrates around an axis which holds the main circulation, using a series of ramps to sow together the buildings and relate them to the outdoor spaces.

The buildings are ordered according to their noise level ; the loudest are located at the lower levels : students access, motorcycle parking, workshops, sports courts, gymnasium, changing rooms, multi-use areas, dining lounge…, while rising up the slope are the buildings destined to lecture rooms, special halls, department offices, tutorial rooms, staff access, ending with the study hall and library located at the highest point practically inside the samall forest.

At the same time a series of open patios facing south are created. They receive the sunlight and screen it from the inside of the lecture rooms so that curtains and filters are unnecessary.

The lecture rooms are in the lecture buildings, reached via a corridor open to the back patio using translucent glass which picks out the shadows of the trees and screens the other lecture buildings from direct views. Theses corridors have a transverse view over the ramps and the forest, and contain the 800 locker modules for the students. The lecture rooms are linked visually by glazing at either side of the blackboard. They are placed with their back facing south in order to avoid glare. Special care has been placed in the selection of materials used in the construction of the lecture rooms to avoid echo and obtain optimum acoustic conditions.

The building gathering all the special lecture rooms is placed at the highest level. It is built by decomposing the longitudinal section as a response to the specific requirements of the program and the transverse section responding to the accessibility of the different lecture rooms.

The stepped decomposition in two directions generates a mechanism of illumination through the roofs and façades.

The gymnasium and changing areas are incorporated to the courts and games areas which are flanked by the ramp and the large canopy providing the entrance to the complex. A series of stepped ramps communicate the lecture room level with that of the courts, eliminating architectural barriers and anecdotally providing a setting for the end of year photograph.

The multi-use area placed above the changing rooms is built with a large concrete box closing its back and sides, forming a loadbearing façade with a series of solids and voids which provide a good lighting level and incorporated this space to the patio behind.

The forest areas, the linear patios (which can also serve to hold lectures) of the lecture buildings, and the stepped outdoor flanking the buildings, are treated with groups of trees which will provide diferent shades.

Few materials have been used in the construction : the white pressed marble chip brick of our invention, concrete walls, inverted roofs with gravel, some wood panelling inside, and floors of concrete, gravel or sand in the outdoor areas. The project attempts to link with light the intermediate relacion and access spaces giving great importance to the interstitial areas between the buildings.