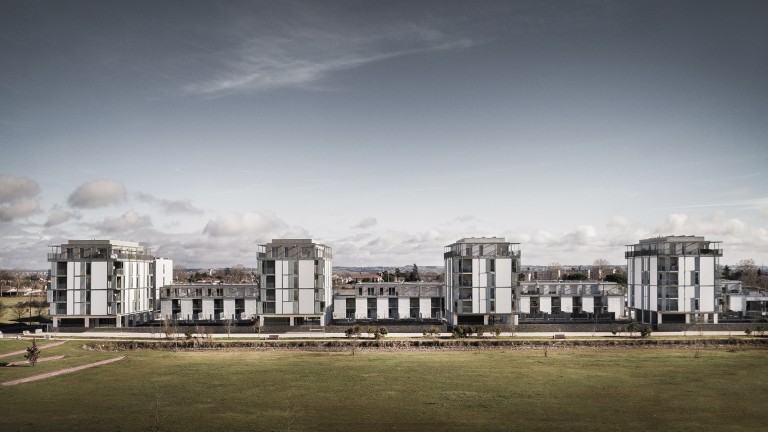 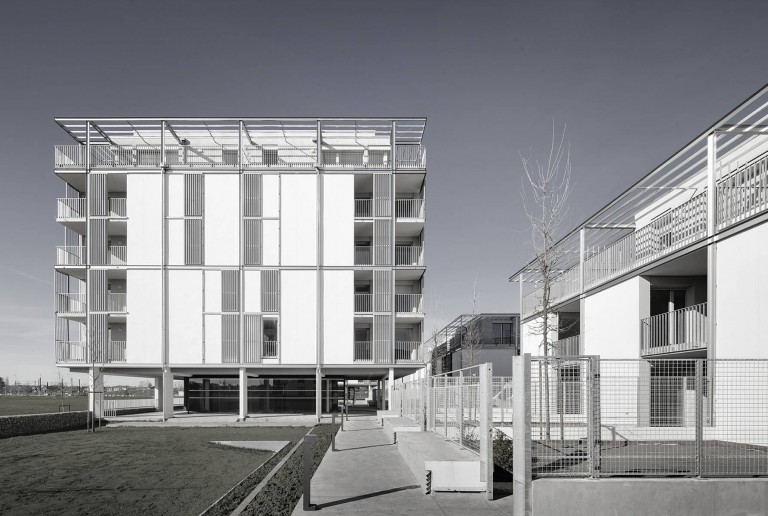 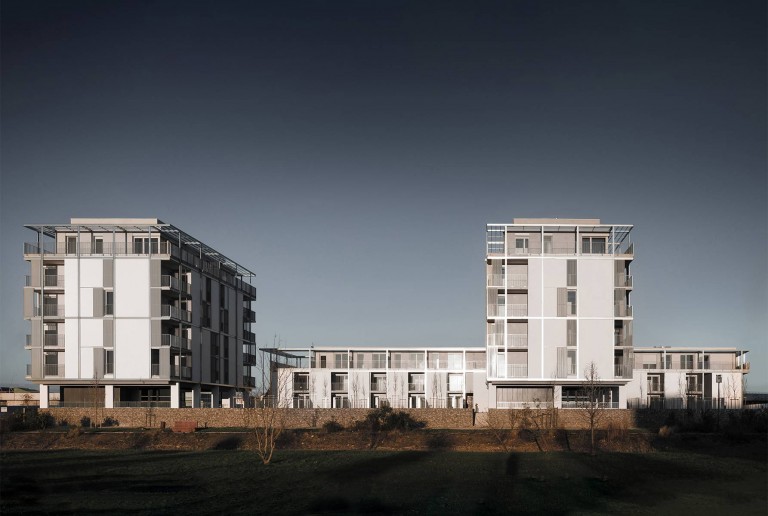 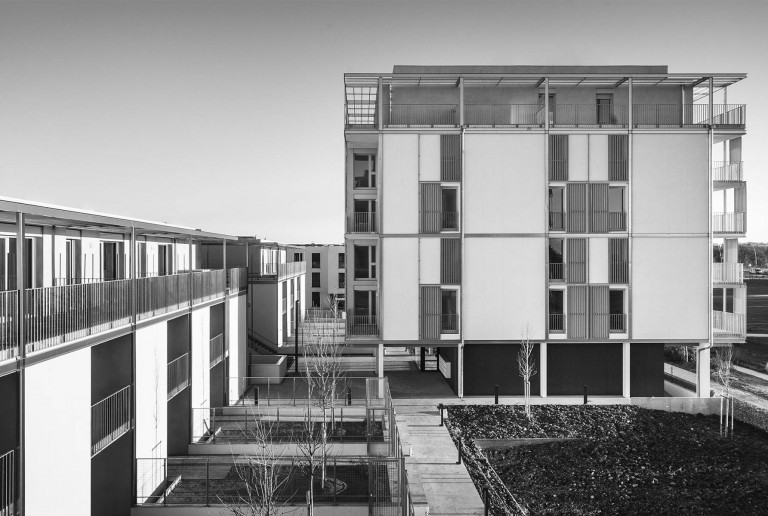 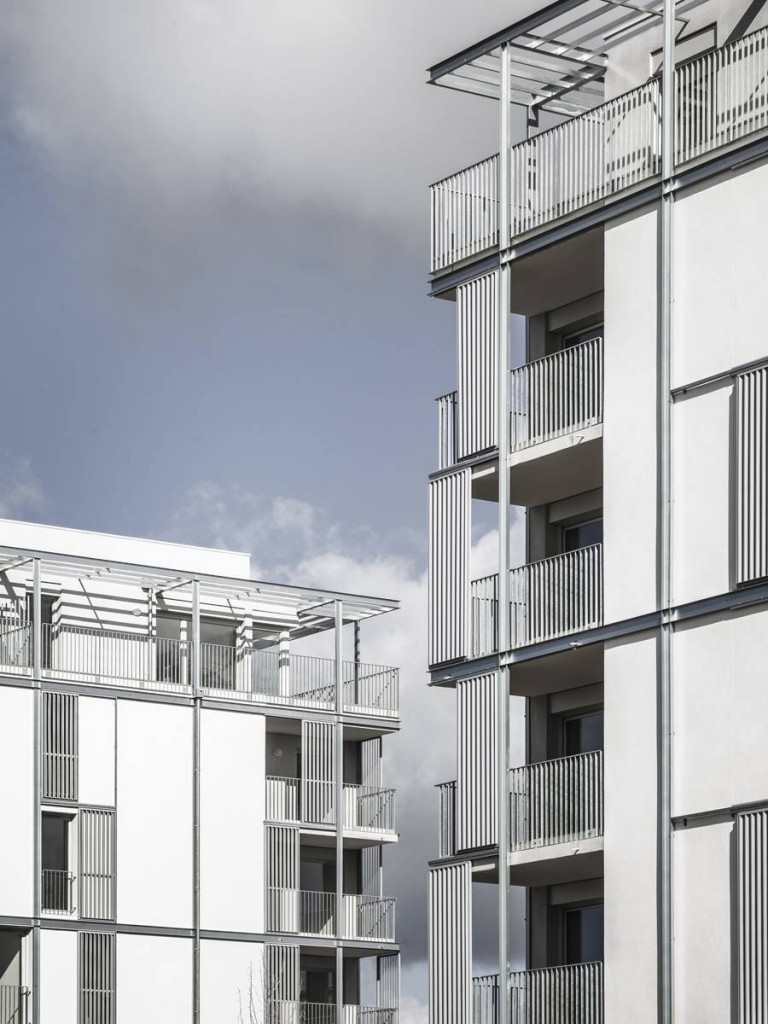 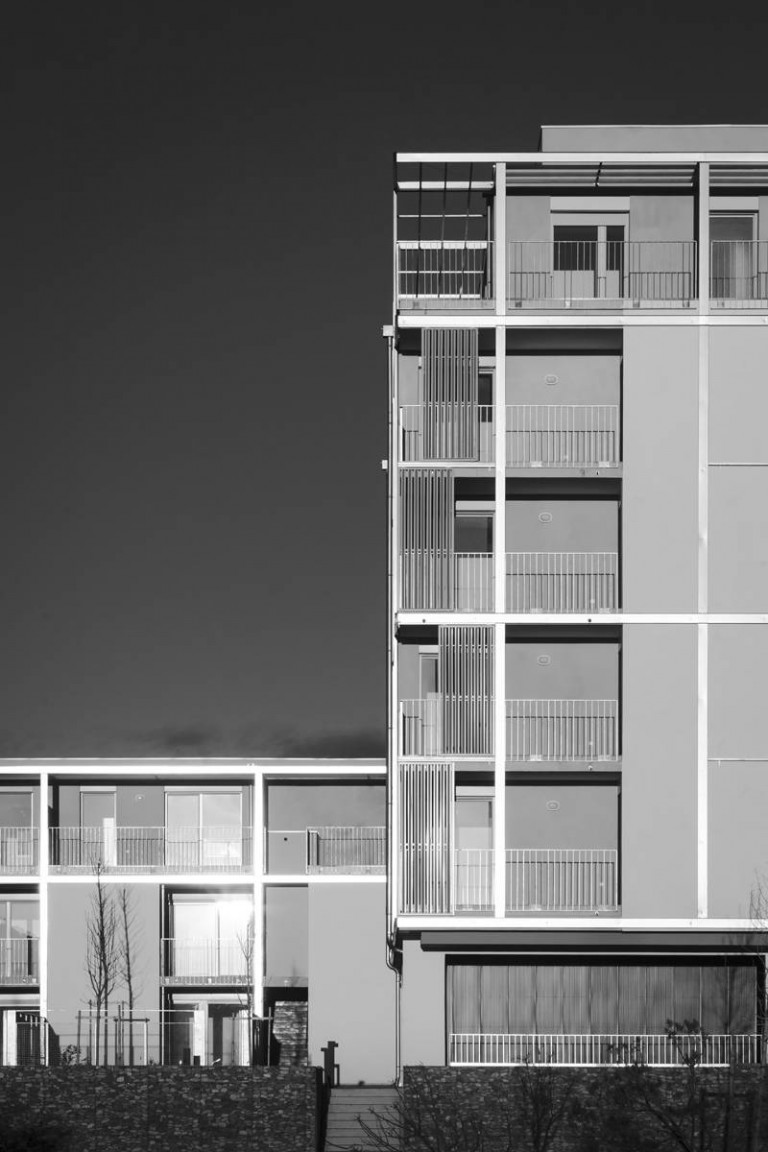 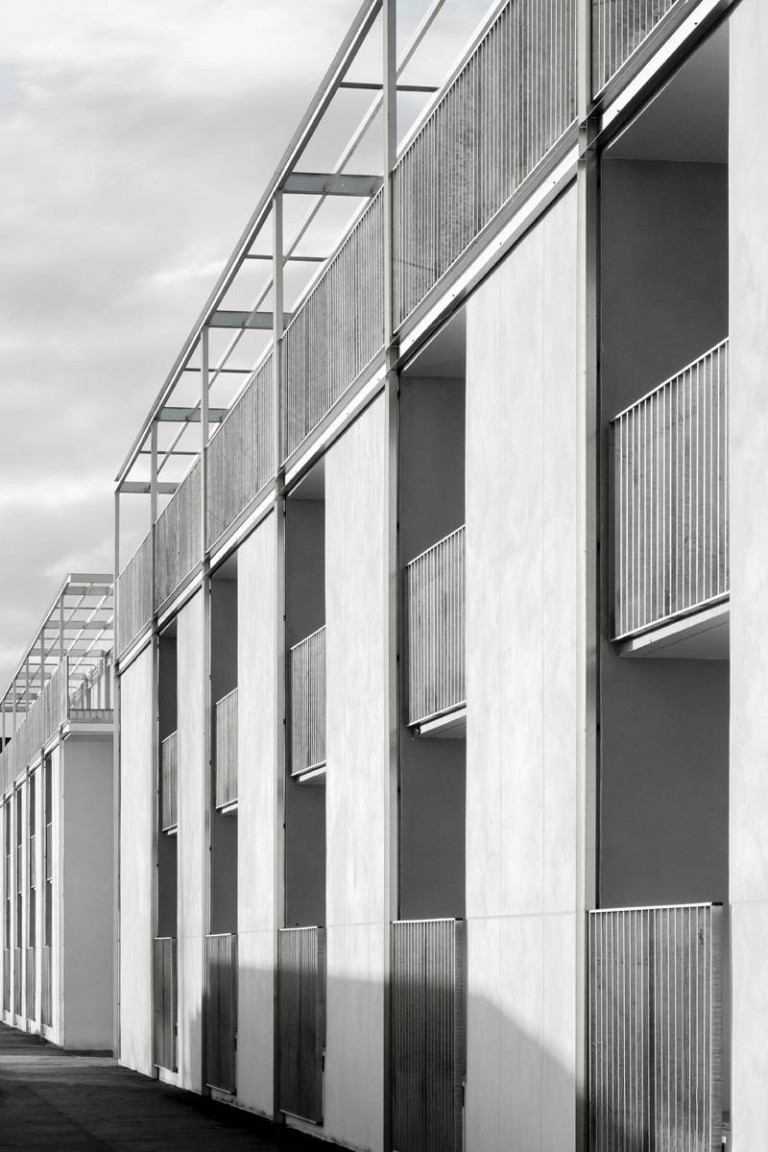 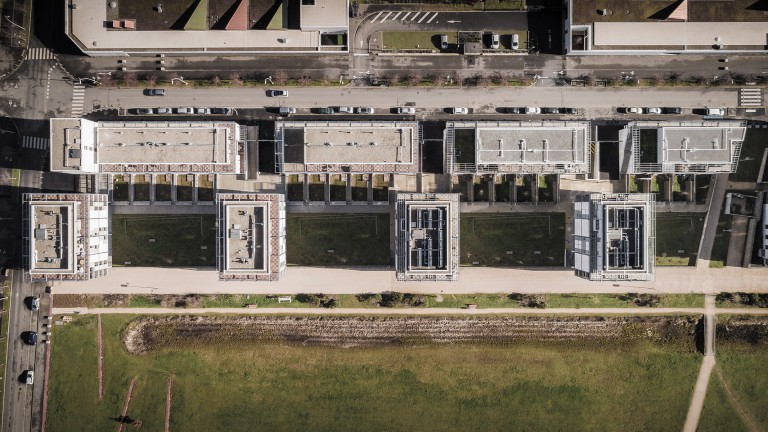 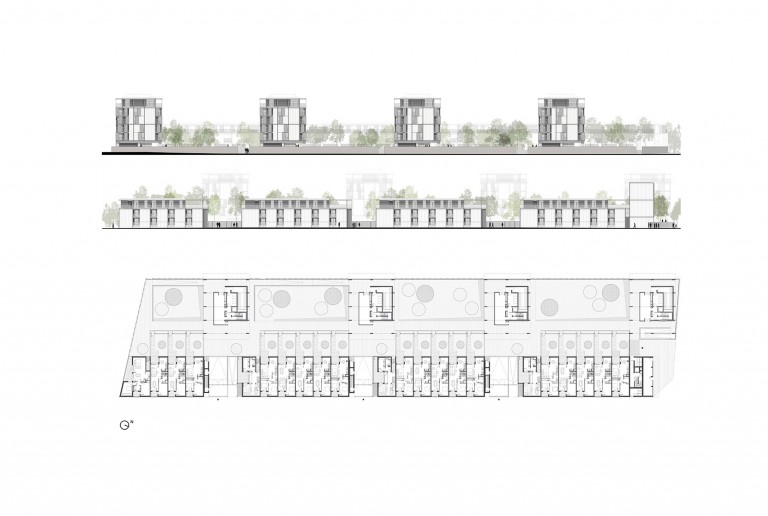 The land lot is located on the northern edge of the ZAC Andromède, adjacent to Toulouse Airport, and has its main frontage on the west side giving onto Cours Barricou, the ZAC’s natural axis. (ZAC = Zone d’Aménagement Concerté, or comprehensive development zone). To the east, Rue du Vignemale orchestrates the transition to the urban scale of the commune of Beauzelle, and delimits the resulting parcel of land, which is elongated in shape, measuring 180 x 40 m. The project is divided into two phases, the first of which was submitted in February 2016. The mixed nature of the landscape of northeast Toulouse is conducive to working at a dual scale corresponding to both the wider landscape and a more urban kind of planning. The implantation of 4 low buildings, plus 5 giving onto Cours Barricou, favors an east-west transversality and also establishes a subdivision in the center of the city block into 4 sub-complexes, each of which provide a response to the distant view presented by the extension of the cours, or walk. In the opposite direction, a number of medium-sized buildings are positioned in alignment with Rue du Vignemale, giving a feeling of intimacy to the centers of the city block, places of transition between public and private space, and at the same time orienting them towards the privileged southwest views.

The simplicity of the volumes proposed and their implantation corresponds to variable, dynamic typologies and reinforces city block 56’s sense of being both a starting and end point. The overall implantation tends towards an optimization of solar orientation and the distances between the volumes. Given their independence and their interior distribution, then, the different volumetries seek to provide the finest quality possible to the general run of housing units, most of them facing south or southeast towards the good views: towers with balconied apartments and intermediary bar buildings with garden apartments and duplexes. A conscientious dematerialization of the prismatic volumes is undertaken by way of setbacks, the handling of corners, bases, crowns and boundaries of all kinds. The unbuilt spaces play their part in this simplicity; they are structured in little squares and gardens interconnected by a longitudinal pedestrian axis and directly accessible from the street.

SYSTEM AND MATERIALITY
The modulation of floors and façades leads to a rational construction, one which also responds to the different scales. The framework and metalwork pattern in use creates the view from afar, while the rest of the façade of simple continuous walling forms a neutral, discrete background. These modules, consisting of metal profiles and galvanized metalwork, and sliding elements with aluminum louvers, give the façades flexibility and variety. The combination of the modules permits them to be connected at double deck height. The play established between the fixed, movable, compacted or voided elements, with numerous mechanisms for the grouping of apertures, is added to the general dynamics of the dual (near and far) reading of the façades.

A SUSTAINABLE ARCHITECTURE
The sobriety of the formal aims reappears in the declared intention to work on compactness and to avoid losses as much as possible. The through apartments generalize the double orientations, leading to natural ventilation and maximum insolation. A range of intermediary spaces—loggias, terraces, lattices, and gardens—complete the filtering devices. The sum total of these devices ensures a passive environmental approach completed by active systems of energy management and a principle of rainwater recovery for the general watering of the parcel of land, thanks to the green roofs. Particular attention is paid to the handling of outside spaces, especially in the disposition of large planted features in the gardens, endowing the sunniest areas with adiabatic ventilation and masking during the hottest seasons. The emphasis is placed on quality landscaping and perennials. We meet with this careful handling  again in the three large gardens of full soil that incorporate rainwater retention and in the private gardens, which with their small trees provide a filter for exposure to the sun from the west.